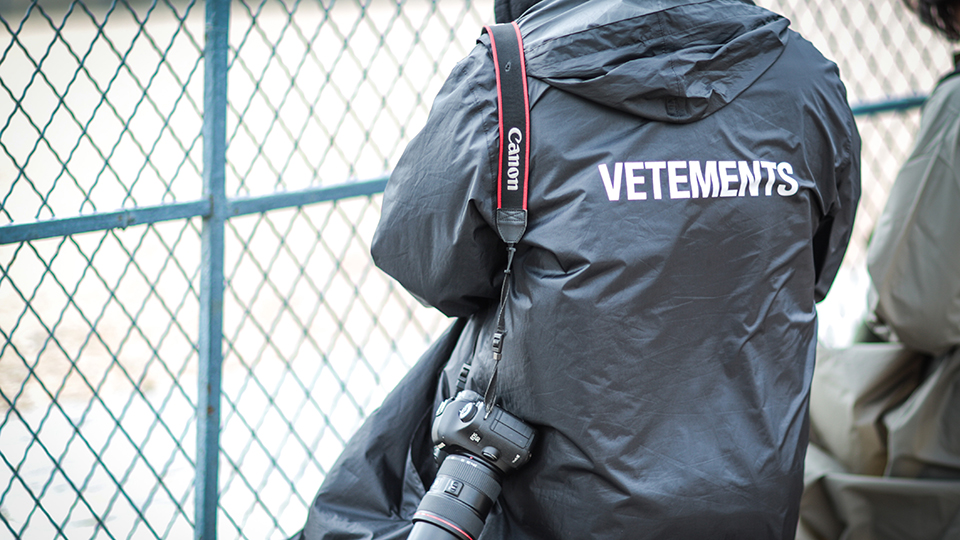 Satire: the use of humor, irony, exaggeration, or ridicule to expose and criticize people’s stupidity or vices.

But one brand has come out above all others in the modern satire stakes. You’ve heard its name; you’ve probably read 1,001 articles calling its logo-snatching designs and extortionate price tags everything from “revolutionary” to “baffling”; hell, maybe you’ve just noticed the pair of platform boots that haven’t left the feet of one Taylor Swift for the past few months.

Since launching in 2014, design collective Vetements has become one of the industry’s most-talked-about brands. Comprising former Margiela and Louis Vuitton designer Demna Gvasalia, his brother Guram, and five other friends, the label has built a catalog that features hugely oversized hoodies, intricately reconstructed jeans, and the occasional Hollywood blockbuster. “Star Wars” skirt, anyone? 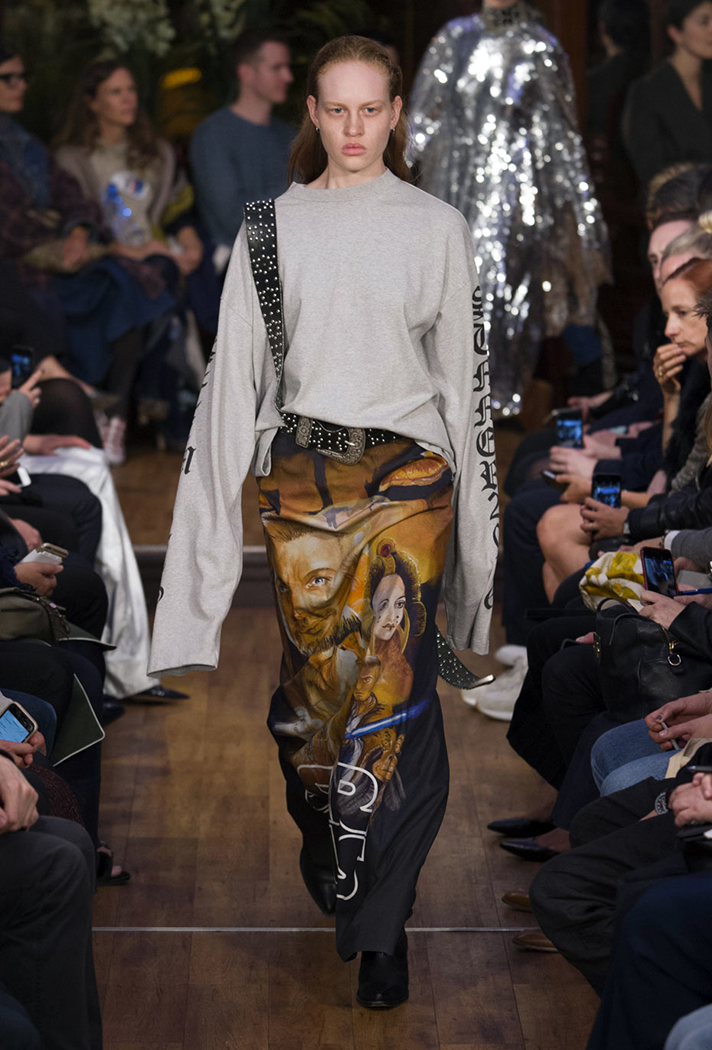 Its ethos is simple: Never overproduce, never go on sale. Where stores and seasons normally dictate to designers, Vetements has reversed the role. Each piece is limited-edition, meaning that once it’s gone, it’s gone forever. Gender distinctions have no place in its repertoire, with men and women taking to the runway—and the streets—in identical looks. The designers have created a new kind of luxury; one where track suits and T-shirts have replaced unwearable fairy-tale gowns. And, man, is there demand.

Several of Vetements’s parody designs have gone viral, spawning outrageous resale values and a whole host of memes. A year after its first collection (which included precisely zero logos), the label sent out cut-up souvenir T-shirts originating from Antwerp street stalls that sold for 20 times the market price. Then came the real game-changer: a $330 DHL logo T-shirt that’s a close copy of the shipping company’s $6.50 design, along with numerous hoodies replicating the “Titanic” star-crossed lover poster and the logo of sportswear label Champion. Not to mention the pre-orderable Snoop Dogg tee that’s indistinguishable from the rapper’s ’90s merch—except for its $924 price.

Speaking of DHL, Vetements’s sold-out design caused such a ruckus that online retailer Lyst orchestrated a prank last month wherein employees “kidnapped” a driver just to get their hands on some of the original yellow tees. “For every DHL top sold, 280 shoppers are trying to buy it,” read the fictional ransom note. While the stunt was clearly meant as a joke, its more serious undertone was evident: Gvasalia’s cleverly constructed hype has turned us into the fashion victims we once laughed at; our thirst for “It” items has never been greater. Vetements had played us all … and the fashion system along the way. 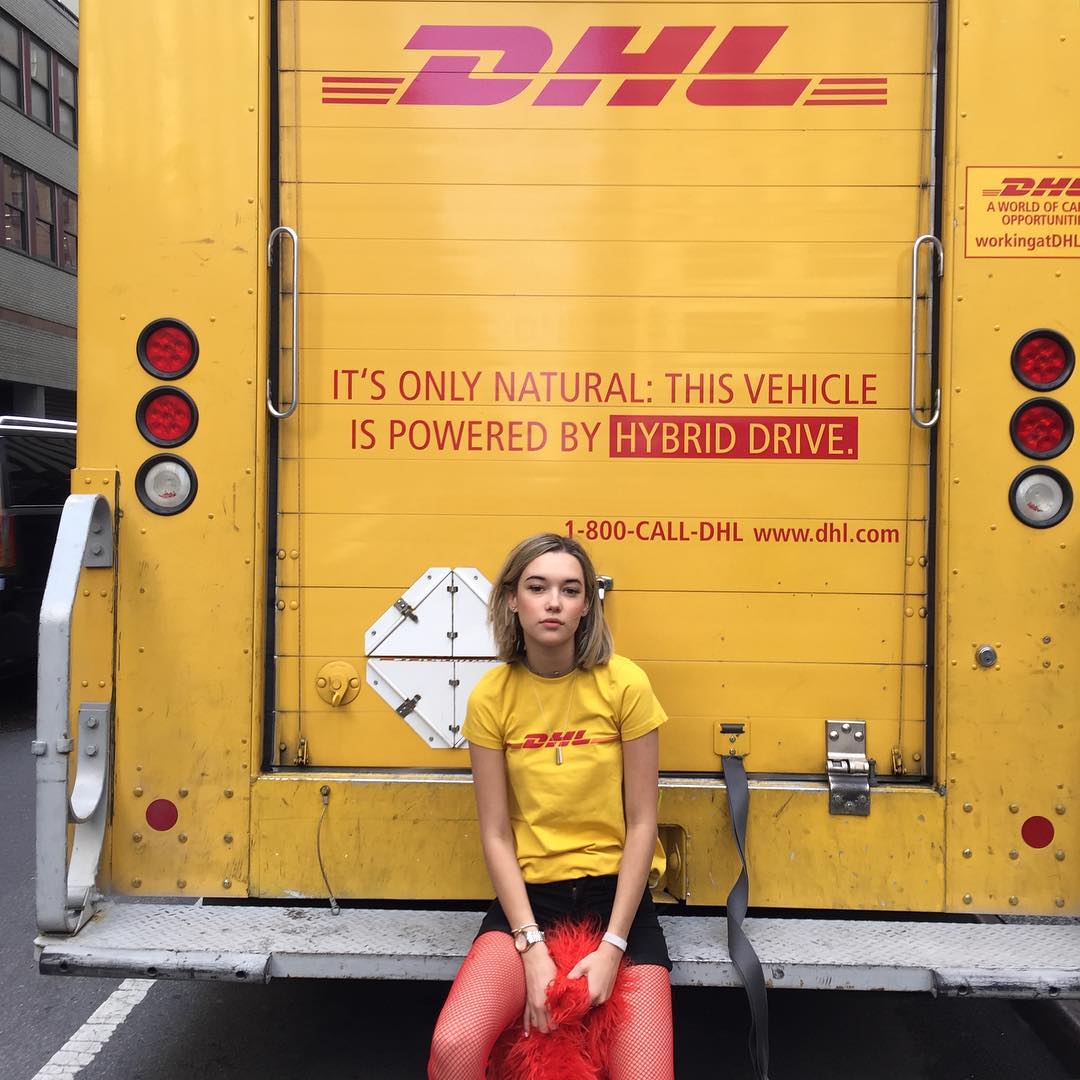 “It is ominous and powerful that this can become so desirable,” trend analyst Aleksandra Szymanska recently told the Guardian.

“There are so many layers of so-called postmodern irony at play here,” says Malcolm Barnard, senior lecturer of visual culture at Loughborough University and author of such books as Fashion as Communication. “Vetements may be both mocking the obsession with designer names (as has been done many times before—think Tom Bored and Praduh) and encouraging a more critical take on consumption at the same time.”

Indeed, Vetements is hardly the only label right now playing with logomania. Last year, Moscow-born designer Gosha Rubchinskiy combined the Russian and Chinese flags for a more political take on the iconic Tommy Hilfiger logo. Just like Vetements, his T-shirts sold out almost instantly, ending up on the backs of most of Europe’s “cool kids.”

MORE: How a $135 Bomber Became the Year’s Most Ubiquitous Jacket

Designer names aren’t the only things on Vetements’s list of targets, however. They’ve mocked teen fandoms (see the Fall 2016 “justin4ever” hoodies); mocked the people that wear merchandise by an artist they’ve never listened to from a tour they never attended; mocked our desire to belong, even when that means dressing somewhat ridiculously.

The biggest mockery of all? Vetements’s clothes are technically ugly. Wearing exaggerated shapes with sleeves long enough to give the impression your entire body has shrunk doesn’t sound like an appealing concept. And while this avant-garde, Margiela-esque way of thinking has won the admiration of fans and industry insiders alike, support doesn’t necessarily equal long-term success.

“Vetements’s widening of the silhouette has undeniably filtered through to other labels,” says Sandra Halliday, founder of Trendwalk.net and former editor-in-chief of global trend forecasting agency WGSN. “Whether that silhouette will meet anything but resistance from consumers en masse is a big question.” 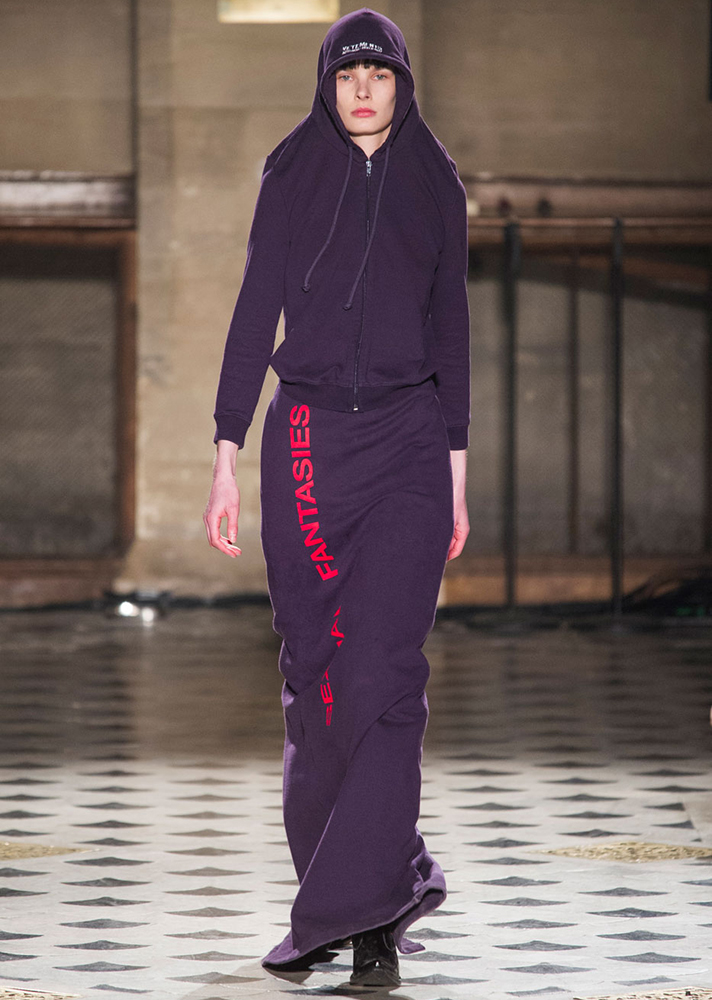 Yet if sales figures are anything to go by, quite a few of us are more than willing to undergo complete transformations in the name of fashion. We’re quite happy to look “ugly.” You could say we’re practically begging to brand bizarre logos on our chests and pay a month’s rent for the privilege.

While other designers have found themselves in the crosshairs of critics for citing less-privileged groups as inspiration—such as Jeremy Scott mimicking McDonald’s workers’ uniforms for Moschino Fall 2014—little has been said about Vetements’s similar appropriation.

Still, the brand is decidedly divisive. Some critics confess to not getting the collective; others applaud it for its design acumen and innovation. Strangely, it’s rare to see an appreciation of the designers’—perhaps warped—sense of humor.

Halliday, at least, has made up her mind. “The fashion industry is always looking for the next big thing, and Vetements is the latest in this grand tradition. The skinny jeans, skinny sleeves, long, straight hair ideal has dominated for so many years now, and Vetements is at least trying to break away from that. However, they’re charging very high prices for so-so pieces. There are people out there handing over $1,000 who in a year will say, ‘What was I thinking?’ Good designer fashion is like good wine. It matures and looks great years down the line.” 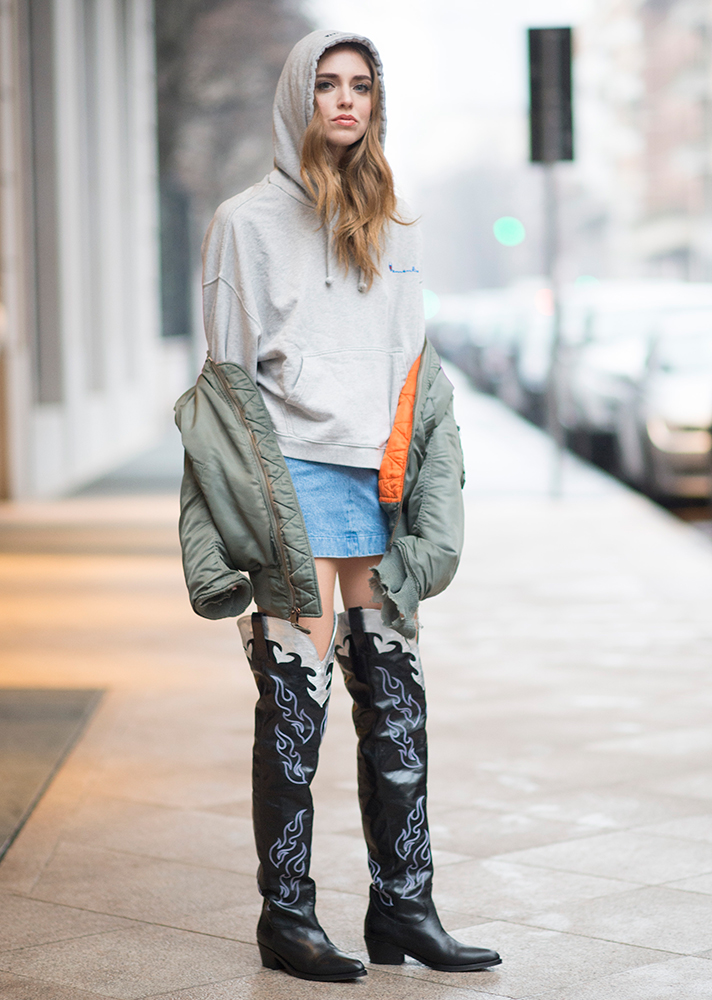 Barnard echoes a similar sentiment, arguing that brands such as Vetements are never as fresh or satirical as they’d like to think. “The elevation of distinctly unglamorous, ‘anti-fashion’ logos to ironically expensive fashion items is not new. Nothing in fashion ever is. Whoever buys this stuff is contributing to Vetements’s profits and the spending of money is not ironic in a capitalist economy.”

The big question is: Can Vetements criticize while it capitalizes? One could say that if its main goal was money, the collective has the demand and means to make an absolute fortune. Instead, items sell out and the label refuses to produce more. CEO Guram Gvasalia confirmed this at a recent talk in London, saying there were “thousands of requests to make [certain] hoodies again. If we were to, we would probably be able to make a million in a day.”

Then again, maybe Vetements has made too much of a headway into the industry to be truly critical. Unlike the underground streetwear brands whose logos it has subverted, Vetements is no longer an underground label. In fact, it’s pretty mainstream, with the likes of Selena Gomez and fashion blogger Chiara Ferragni wearing branded sweats. The face of the group, Demna, even took the creative director position at Balenciaga last year, further cementing his status in the industry.

Can you really joke about something when you’re an integral part of it? Can you talk sincerely about the concept of slow fashion (“It’s nicer when people save up. They can buy this one piece that they cherish for a longer time,” stated Guram Gvasalia) when you continue to churn out satirical designs that have little longevity? Franco Moschino’s humorous work was not bought for its irony; rather its “flattering, feminine fit,” says the daughter of a prolific Moschino collector. Unlike for Moschino, the word timeless doesn’t seem right for Vetements—especially when, in 2016, we move from one thing to the next at such rapid speed.

Take Lorde’s recent tweets as a prime example. “Vetements is uncool now,” proclaimed the singer, to which one of her followers replied with the collective’s single major criticism: “they became uncool the second they sent 35 white people down the runway (again).” Lorde agreed, tweeting back, “yeah that was extremely tone deaf and a sad moment.” (It’s worth noting that Gvasalia refuted the racism claim, telling the Telegraph, “It was the attitude of those girls that was important for me, not the shade of their skin or their origin.”)

Maybe we’re all giving them too much credit. Just as the hype surrounding Rubchinskiy’s Hilfiger-esque logo died down, perhaps so will Vetements’. Only time will tell whether the effect of Demna and Co. will last forever or just a few seasons before we say hello to the next It-brand. “Fashion is very fickle and can move on at any moment. That’s not to say that Vetements won’t evolve and mature, but I don’t see them having longevity based on what they’re currently doing,” remarks Halliday.

So is Vetements revolutionary? Judging by the huge divide it’s created between lovers and haters—not to mention the constant chatter from both sides—Gvasalia and his team may just be the radicals fashion has been waiting for. After all, some of the most successful designers aren’t universally liked. (Just look at Saint Laurent’s record sales under the controversial Hedi Slimane.)

Or perhaps it’s time to simply take Vetements at its face value. In the words of Demna Gvasalia himself, “it’s just clothes.”