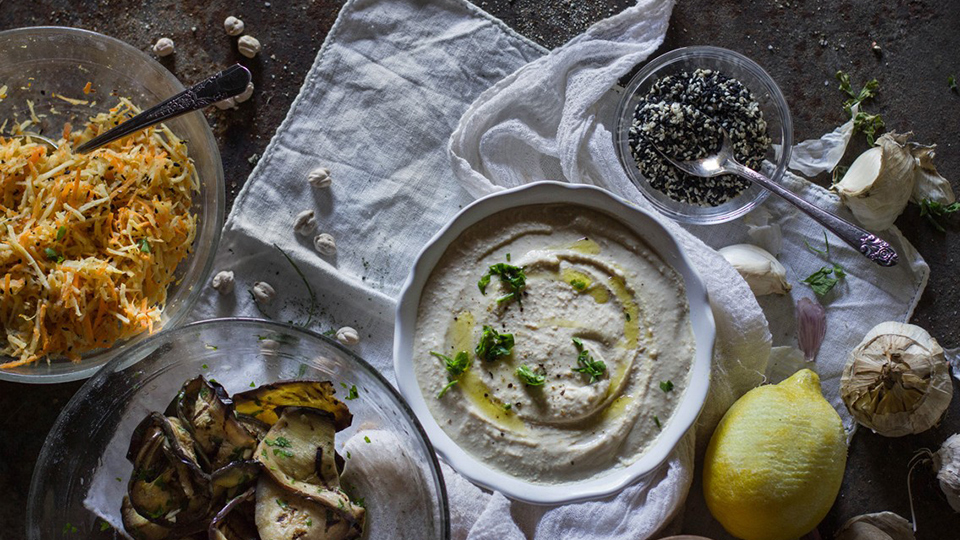 Today I went biking after work in search of inspiration. I think of a lot of things while I bike, mostly stupid things. But today I stopped by a thrift shop that I love and hadn’t been to in a while, and I found a pile of old cooking magazines from the ’90s, which are one of my favorite things ever. If any of you ever browsed magazines from the ’80s or ’90s, you’ll see how heavily involved meat was in 90 percent of the recipes, and combining multiple protein sources was a common practice.

Seeing those magazines made me think of modern publications in Italy, and their endeavor to adapt things like quinoa to Italian tastes, and then I thought of young male bloggers/editors with the legs of their pants rolled up and a pair of charming sideburns who dream of moving abroad because rhubarb and avocado are just not the thing here and assembling a decent, modern brunch even in Milan is so very difficult (in case you are wondering, yes, that is the embodiment of my male counterpart).

Consequently I thought of brunches, aperitivos, and antipasti spreads, and at how I heard people scowl at the word vegan or vegetarian being put in front of any of those terms, which are some of their oh-so-favorite words in the world.

I realized that there is one main problem with those words today: when people hear vegan or vegetarian, they do not think of the idea of not eating meat. They think of a condition in which all you can eat is vegetables. (And tofu. Italians hate tofu.) 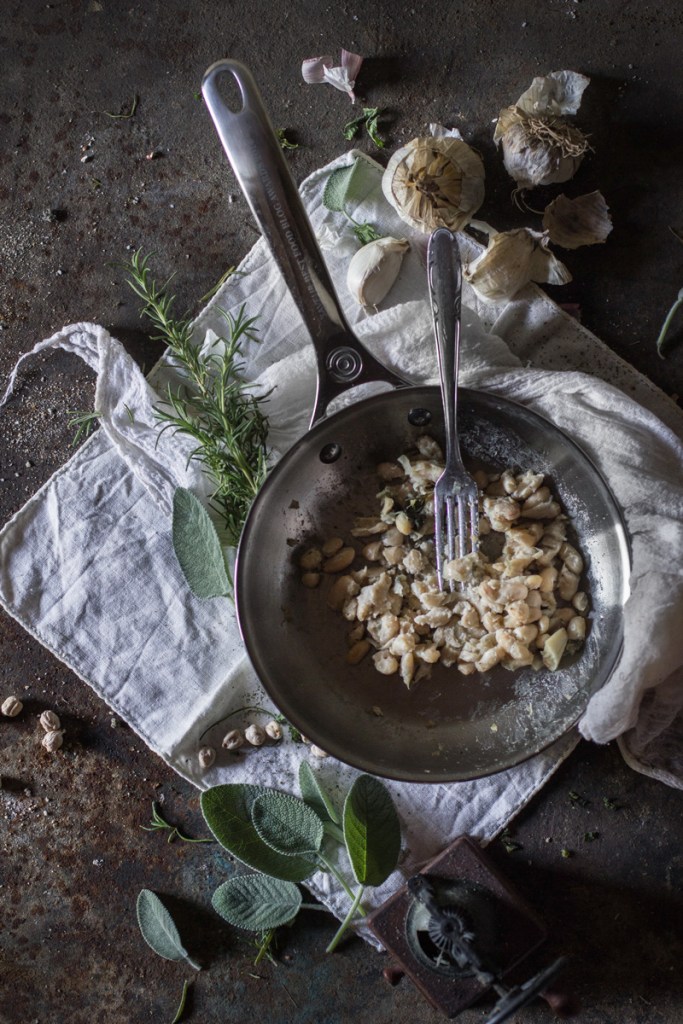 Most people, though, don’t realize that the plant world is very vast and does not include only lettuce and carrots. Case in point: Many of Italy’s favorite dishes are vegetarian or vegan. In fact, most of the foods present at party spreads or aperitivos tend to be, as meat is more expensive than grains and assembling an all-you-can-eat to feed a crowd of people who’ll only pay 5 euros per drink is no easy task. Pasta with garlic, oil, and chili? Check. Red pizza and potato focaccia, which are super common on every party table. Flatbread with cheese and arugula (which I’ll soon talk about). And again, cheese with preserves, most summer pastas, calzoni, rolls with vegetables, bruschetta with tomatoes and peppers. It’s mostly carbs. Who doesn’t love carbs?

Being into lifting, yoga, and nutrition, I thought that it would be nice to come up with some more interesting ideas for a vegan spread. I wanted protein and fiber to be present, without having people think of macrobiotics and other scary words, and just focus on flavorful, whole foods. The options for a vegan antipasti spread are countless, so here are some of my favorites, some ideas, and three recipes that made my Saturday very satisfying.

If not making these for a party spread, all these food items make for a very nice, pull-everything-out-of-the-fridge kind of weeknight dinner. They can all be prepared the day before, and are good enjoyed on a hot summer night, or at a picnic. Maybe with some refreshing drink, like flavored tea. Or some ginger lombucha, if you’re not scared of the word macrobiotics.

The garden is now in full bloom, and we have so much stuff growing! Not grilling vegetables would be just insane. Those are just some ideas amongst many, though. A vegan spread can have so many beautiful options.

Here are three recipes that can contribute to a nice vegan spread, along with some more suggestions below. The grilled vegetables are a real classic, and people always ask for them at potlucks and gatherings. Layer all these three on some toasted bread with extra-virgin olive oil, or use them to stuff a sandwich, a panini, or a wrap. They can be used in many ways!

Having spectacular bread is essential to a good spread. Some include burnt grain bread and split whole-grain loaf. So intensely flavored!

Simply julienne the vegetables and toss them with the dressing ingredients. Crush the roasted sesame seeds for the best flavor.
This combination of celeriac and carrots is very common in Italy, and a lady I worked for used to make it quite often specifically for me.

If using canned beans, rinse them very well. If cooking dried, make sure you soak them overnight and do not add any salt to the water, as it toughens the skin. You’ll need to cook them until very soft, which might take up to an hour.

Finely chop the shallot and add it to a small pan with the olive oil, sage, and rosemary. Stir -fry gently until everything is aromatic, the herbs crisp up, and the shallot softens. Add the beans to the pan and toss to coat.

Discard the herbs, then scrape the contents of the pan into a food processor. Add the garlic, a bit of extra-virgin olive oil, salt, pepper, and the nuts and tahini if using, and purée to a paste. Add the stock or water little by little, until you’re happy with the consistency.

Spoon into a bowl and garnish with more EVOO, if desired. You could also add a sprinkling of paprika!

IDEA: Try adding 3 to 4 pieces of dried tomatoes in olive oil to the processor. Extra umami!

Heat up a grill or a nonstick or cast-iron pan.

Thinly slice the vegetables lengthwise, about 2mm (no more than 0.1 inch) with a mandolin. Grill the vegetable slices very briefly, no more than one minute on the first side and 40 seconds on the other. If you sliced them a bit thicker, the eggplants might need more time.

Once done, toss in a bowl with the garlic, parsley, crumbled dried chili, oil, and salt and pepper to taste. Add some finely shredded basil to enhance the flavor further, and, if you have good-quality balsamic on hand, add a splash. Toss well and refrigerate for a bit to let the flavors mingle before serving. 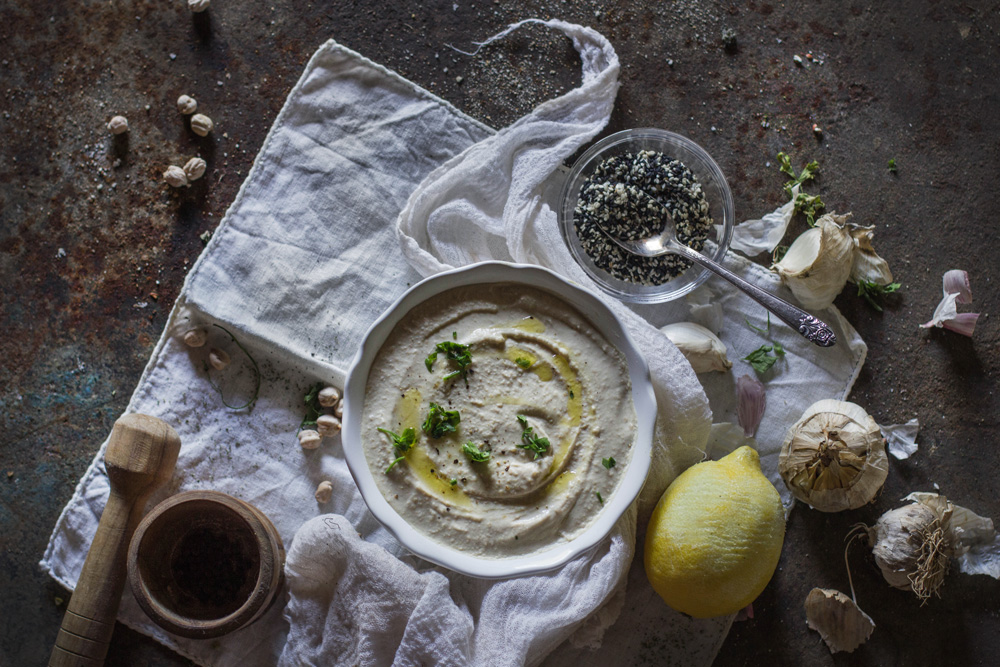 GOOD ADDITIONS TO YOUR SPREAD:

Valentina is a 25-year-old Italian ex-graphic designer who, like many designers, got seduced by food photography. She runs Hortus Cuisine, a blog where she shares Italian natural vegetarian recipes from the Italian countryside. She loves green tea, hates cilantro, and considers handmade pasta a form of art. Follow along on Instagram @HortusCuisine.