The sweetest tribute to her loved ones. Vanessa Bryant got tattoos for Kobe and Gianna after their death in a tragic helicopter crash in January. Vanessa took to her Instagram Stories on Wednesday, June 10, to share a video of her getting a tattoo on her shoulder in honor of her late husband and daughter.

“I wanted my boo boo’s @kobebryant sweet message transferred on me,” she wrote on her Instagram Story. She then shouted out her tattoo artist, Nikko Hurtado, who she said “came through for me.”

“Truly honored to give you something to keep with you my friend,” the tattoo artist wrote back.

The mom of four also shared a video from February of her tattooing Gianna’s handwriting on her. “Gigi’s sweet message transferred on me…So happy I can see my Gigi’s handwriting [every day],” she wrote.

Vanessa’s tattoos come after Kobe, 41, and Gianna, 13, died in a helicopter crash in Calabasas, California, on January 26, 2020. The father and daughter passed away with seven other people, including the pilot, Ara Zobayan. Vanessa’s tattoos also come after she celebrated her late daughter’s graduation on the day she would’ve graduated from the 8th grade.

“Congratulations on your 8th grade graduation Gigi. I love you forever and always. I’m so proud of you,” Vanessa captioned an Instagram post in June, which included a photo of a graduation lei and Gigi’s diploma. The teen would’ve started her freshman year of high school in the fall. Gianna’s middle school, Harbor Day School, also shared a photo in honor of he student. 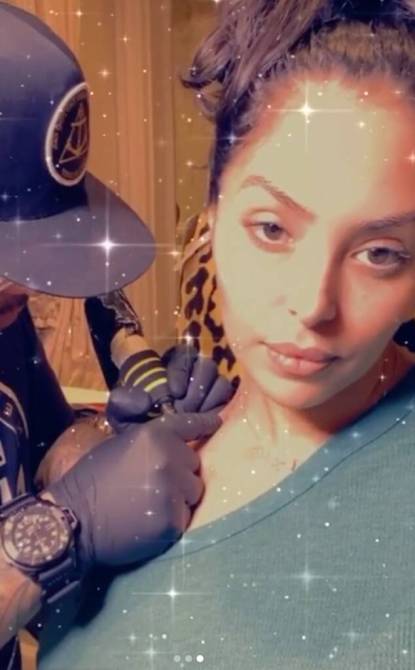 At Kobe and Gianna’s Celebration of Life in February, Vanessa paid tribute to her loved ones with emotional speeches. The ceremony was attended by Beyoncé, Kim Kardashian, Kanye West and dozens of others. “Kobe was known as a fierce competitor on the basketball court. The greatest of all time, a writer, an Oscar winner and the Black Mamba. But to me he was KobKob, my Boo-Boo, my Bae-Boo, my papi chulo. I was his VeBe, his principessa, his reina, Queen Mamba,” Vanessa said of her late husband.

Of her daughter, she told the crowd: “I am still so proud of Gianna, and she was kind to everybody she met for the 13 years she was here on Earth. Her classmates shared many fond stories with us, and those stories reminded me that Gianna loved and showed everyone that no act of kindness is ever too small to make a difference in someone’s life.”