There aren’t many things a Kardashian/Jenner can wear these days and still raise eyebrows: Lingerie as outerwear? C’mon, you can do better. A “Turbo Thot” one-piece? Pshh, amateur hour. Luxury Spanx? Been there, done that—many times over.

But when Kendall Jenner stepped out last month in a Metallica T-shirt slashed nearly to the navel, well, people had some opinions. Even within the STYLECASTER offices, we were divided: some loved the tee and said they’d consider DIY-ing it at home; others thought the exposed-bra, choker-style was taking the “distressed” look a bit too far.

Designers Katherine Van McKinney and Caroline Bentley Noble are used to their style being polarizing—growing up in Kentucky, where khakis and polo shirts were the de facto uniform, their penchant for thrifted Goodwill finds and ripped jeans didn’t always translate. “Both of our dads used to wear ripped denim working in Appalachia,” recalls Bentley Noble. “My uncle would be like, ‘Do you need money to buy something without holes in it?,” laughs Van McKinney. “They just didn’t get it.”

Now, however, thanks to V2Bentley, their fledgling line of one-of-a-kind distressed T-shirts, custom jackets, and hand-painted swimsuits, they’ve started to find their tribe—one which just so happens to include the two youngest Jenners. 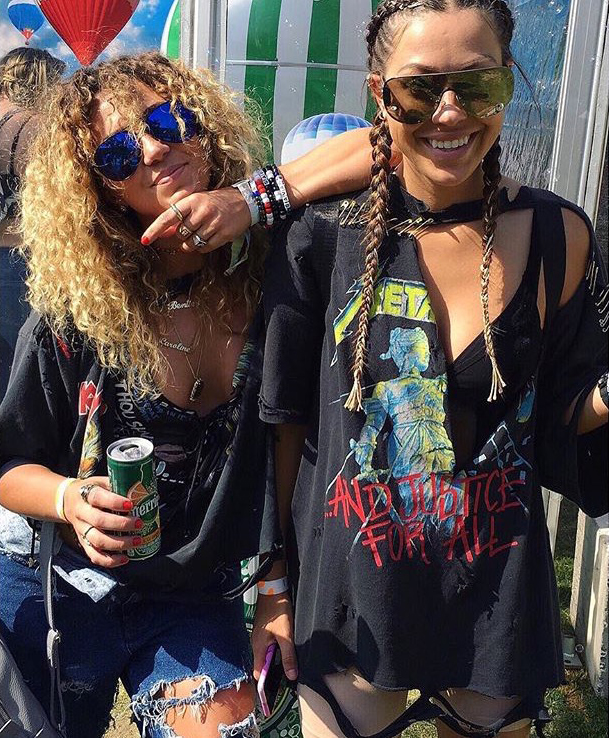 From the floor of the apartment the twenty-somethings share in Los Angeles—they’re about to upgrade to a two-bedroom, but for now are living and working out of one—they explain that they first got their pieces into Kendall and Kylie’s hands through Van McKinney’s old job as a buyer at PacSun, with whom the reality-star sisters launched a line in 2013. She was asked to put together a rack of clothes for Kendall and Kylie to pull from, and on top of calling in product from the store’s wholesale brands—Adidas, Calvin Klein—she grabbed a bunch of tees from her and Bentley Noble’s own collections, reasoning that the sisters-who-have-everything probably already had much of the stuff they were offered.

Their instincts were right: The customized T-shirts were a hit. “The Metallica tee that Kendall was wearing was just hanging in my closet,” says Van McKinney. “The Bompton tee [by streetwear brand 4Hunnid] was Caroline’s and that’s all that Kendall wanted.” The Jenners also pulled some of the hand-painted swimsuits and leather pieces that Bentley designs, which are covered with doodles, symbols, and phrases like “Keep It 100” and “Queens See Queens.”

It didn’t take long before they were wearing them out in Beverly Hills in front of waiting paparazzi, and on Instagram in front of millions of fans. However, there was one small problem: Because the sisters rarely tag the designers they’re wearing, and the tees have an intentional DIY feel, not everyone was clear who designed them. It didn’t help that soon after, Kardashian super-stylist Monica Rose more or less claimed in an interview with People Style to be behind the look herself, saying, “The cutting of the shirts just recently started because whenever we’re in fittings and we’re in the moment, and I feel like something needs to be cut, I’ll literally take out my scissors and start cutting.” (Rose’s publicist didn’t respond to a request for comment.)

While the story stung—accompanied as it was by several photos of their designs—Bentley Noble and Van McKinney credit fan accounts like @kyliejennercloset and @kendalljennercloset for spreading the word about their brand on Instagram (like many, it’s how I came across their names).

Soon, their “one of one” T-shirts were selling out online at about $50 to $150 a pop, and requests were pouring in from as far as Australia and Azerbaijan (they’re working on rolling out overseas shipping sometime in the next week). Van McKinney left her job at PacSun to work on the brand full-time, and she and Bentley Noble officially founded V2Bentley, a take on the name Vanne Bentley, which they designed under when Van McKinney was in the retailer’s employ.

Beyond celebrity aspirations—they’re sending a box to Rihanna soon (“That’s goals,” says Bentley Noble)—they also hope to raise awareness about some of the problems plaguing their home state, like the heroin epidemic that’s claimed the lives of some of their close friends and neighbors. “We really want to shine a light on that because it’s something that nobody talks about,” says Bentley Noble. “It’s a very sensitive subject for us and we’re very passionate—we never want to forget where we came from.”

More generally, they just want to be a positive force in fashion—which can mean responding to nasty emails with nice ones, or holding their tongues when one of the most powerful names in the industry gets credit for their designs in a national publication. “We’re just really big on positive vibes and positive energy,” says Van McKinney. “We don’t wanna stress over anything we can’t control.”

With V2Bentley, they say, they hope to spread the kind of message they didn’t always get as teenagers—that it’s ok to wear whatever and be whoever you want—one ripped-up T-shirt at a time.

These Couples Prove You Need to Have Your Engagement Photos Taken in the Fall...