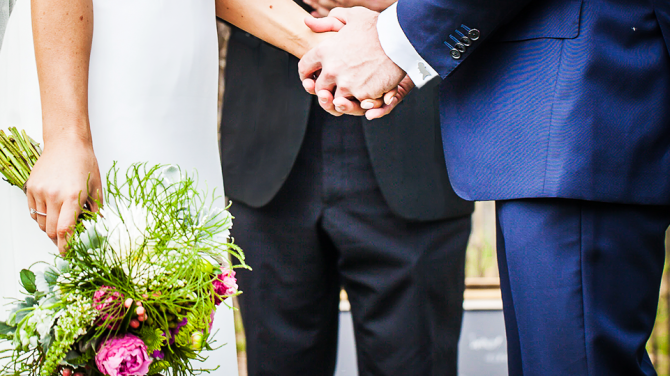 Chances are, you’ve attended a wedding where the person who officiated wasn’t a minister, a rabbi, or a justice of the peace, but rather, the groom’s fraternity brother or the bride’s cousin.

“I see it all the time,” says Molly Guy, creative director and cofounder of New York bridal boutique Stone Fox Bride. “More people now tend to identify as spiritual, rather than religious. It’s very common to see clients go to a trusted guru, friend, or mentor, rather than a religious person. A lot of people ask their yoga teachers to do it.”

The trend is one that lots of wedding planners are on board with, as they think it adds a unique intimacy to the ceremony. “It makes things much more personal, especially when the officiant shares about the couple and their love story,” says Bethany Pickard, owner of Modern Kicks, a Brooklyn-based boutique wedding and event planning company. “It also allows the couple to be creative with their ceremony, incorporating readings, songs, and more, because it feels less about tradition and more focused on the couple as people.”

We talked to five women and men who had unusual—i.e., nontraditional, nonreligious—officiants at their weddings, and got the story behind their choice. 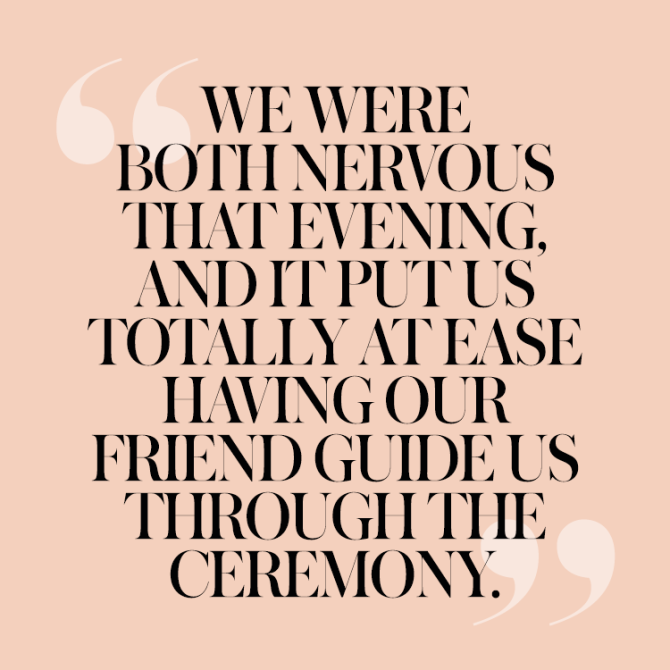 Neither my husband, Keenan, nor I have particularly strong religious affiliations, so we realized from the start that a close friend might be a more thoughtful option to officiate our wedding. Plus, I had some major reservations about the idea of a total stranger leading our ceremony while our closest family and friends looked on.

It was a quick, unanimous decision that the person in our lives most suited to this task was Andrew. Andrew and Keenan grew up together, and when Andrew moved to New York, he crashed on Keenan’s couch for a few weeks, quickly becoming one of our closest friends. A few years later, he began dating my childhood best friend, to whom he is now engaged, further cementing his status in “the family.”

Andrew is an unendingly positive, joyful person, who is very charming and a great storyteller—the exact qualities anyone would look for in a master of ceremonies, but particularly for a wedding. It was one of the easiest decisions of the wedding planning process. Andrew was our man.

On such a tightly controlled day—not much is left up to chance at a wedding—it was exciting for us to know that there would be some elements of surprise to the ceremony. Andrew filled in the gaps with stories—and a few jokes!—about us as a couple and our lives together, which were perfect. Some gentle ribbing of Keenan—a country boy marrying a big city girl—got loads of laughs.

A few moments of levity are so important during a wedding, to remind everyone, the bride and groom included, that doing this should be fun! Though Keenan and I had been together eight years when we were married, we were both a bit nervous standing in front of 125 people that evening, and it put us totally at ease having our friend guide us through the ceremony.

MORE: Modern Ways to Wear Something Borrowed or Blue at Your Wedding 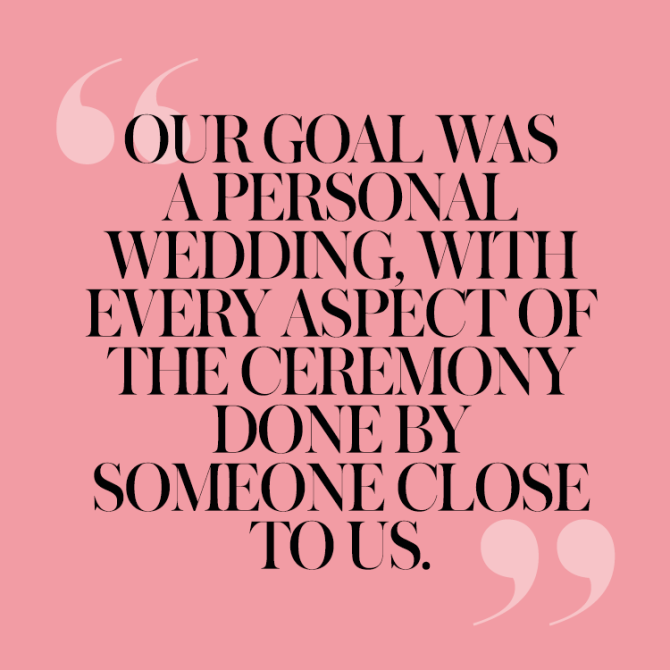 I never wanted to be married in a church, so I was already looking for something more laid-back and personal for my husband and me. Michael knew this when we got engaged, so he was also prepared for an unorthodox wedding. Even though Michael is Catholic, we had agreed on an outdoor wedding.

Our goal was a personal wedding, with every aspect of the ceremony being done by someone close to the both of us. We chose Paul, our college chorale director, because he knew both of us well and we knew he would have fabulous things to say. It wasn’t a hard choice and we both agreed almost immediately, which made our life much easier.

Paul was able to tie everything in our ceremony to singing in a choir, which was such a wonderful touch. He knew us both so well, that as he spoke about marriage being similar to blending our voices in a choir, it felt perfect for us.

Paul and the choir were the reason we met, so to have him and his wife there as we began our journey as a married couple was very special. We also had a former member of the same choir sing at our wedding, and Paul helped her calm her nerves and warm up, which I know helped her and just lent itself to the feeling of a close-knit wedding. 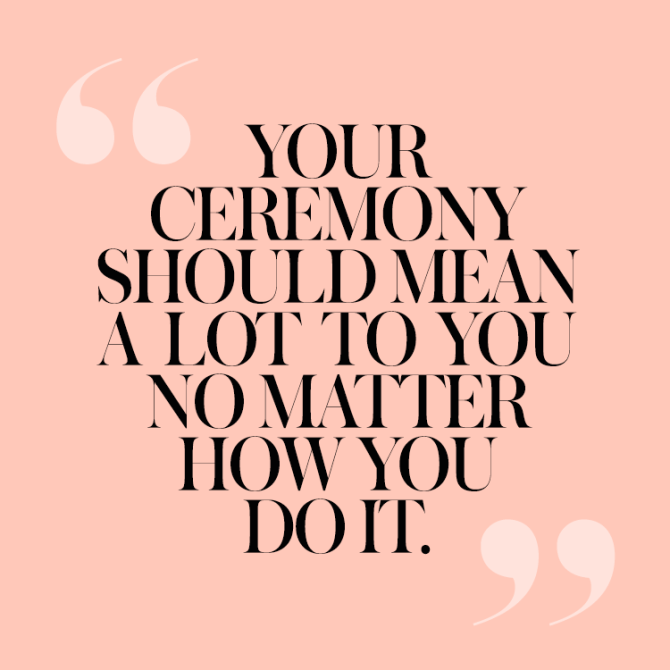 My wife, Allie, was raised Jewish, and I was raised Christian, but not really a big follower, and I really had no desire to be married in a church, so that was off the table. We looked at justices of the peace and read all these reviews about the local ones—people saying they got to know them and made it personal. But it seemed kind of ridiculous to me, meeting someone for three hours. How is someone really going to know you after that? That didn’t feel right to us either, so then we started thinking, Well, maybe we could have someone we know do it.

I met Anne on the first day of college, and we’ve been friends ever since. During our junior year, she introduced me to her roommate—Allie—and that’s how we met and started dating. So Anne is obviously an important part of the relationship, since she brought us together. She also knew both our families, so it seemed like a natural fit. We called her to ask if she would officiate at our wedding, and—after she stopped crying—she said yes.

The actual ceremony was pretty short. We basically totally blacked out and then it was over and we were like, Oh my God, that’s it. We wrote our own vows—Allie compiled them from different things we found online and in books. We wrote the ceremony and gave it to Anne a month ahead of time; she practiced it a bunch and nailed it.

Having Anne officiate was so awesome. We really enjoyed owning it and making it our own. I would totally recommend it if you can find someone who is significant to you and your relationship. It’s just as legally binding. If you’re religious, great, do it that way—but if not, your ceremony should mean a lot to you no matter how you do it.

MORE: 6 Women Spill Why They Skipped the Traditional Wedding Dress 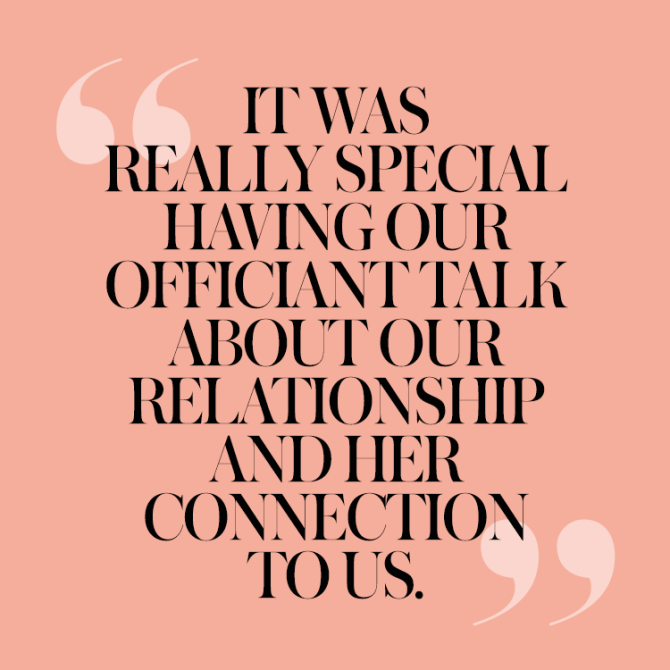 My husband and I have never been religious. His dad was raised Catholic, but he wasn’t practicing. I was baptized Catholic and went to church occasionally with my dad and grandmother throughout my life, but never on my own. So, we didn’t even have to talk about having a religious ceremony—it was an unspoken understanding.

I had read many articles about choosing an officiant, and I knew that having someone with us in front of all our friends and family would be a big part of the ceremony, and I wanted to be sure that we felt good about who that third person was.

It took us ages to decide on who would officiate. I had someone in mind, but my husband wasn’t sold on the idea because he didn’t know her. She, Kim, was a family friend. She had gone to law school with my parents and then she and my mom had babies—me and my now best friend Emily—three weeks apart.

We talked about who we’d want to be such a big part of our day for weeks. About two months before the wedding, we finally decided that we would ask Kim to officiate. I was really happy because I knew Kim would do a great job and we would both feel completely comfortable with her.

We didn’t want a long, drawn-out ceremony with a bunch of elements that weren’t “us.” We did want to be sure that there was time for Kim to speak about us, our relationship, and her connection to us. That was really special—having her talk about Emily and me growing up, and how thrilled she was to be part of my big day.

After the ceremony, I had several guests mention how amazing Kim was. I also had a guest ask me for a copy of our ceremony, because he was officiating a wedding the following month, and wanted to use our format for that wedding—which I thought was pretty high praise! 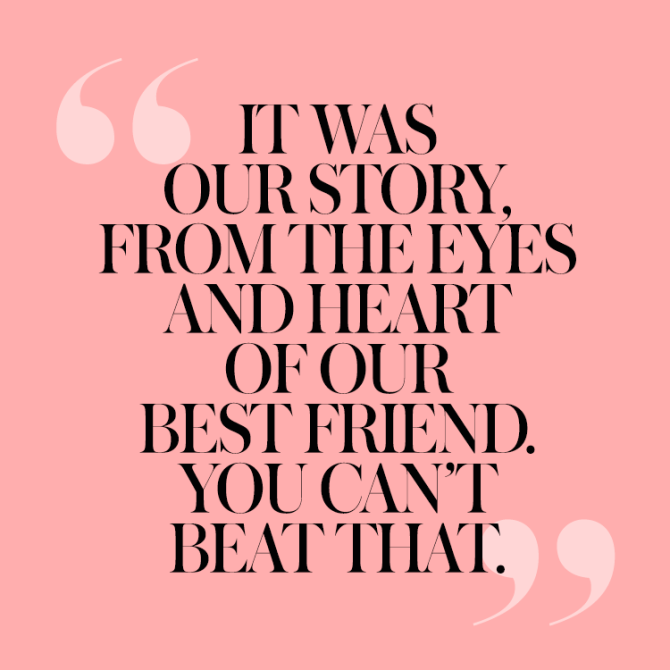 Since we are not super-religious, and we knew we wanted to be married outside on a beach, we knew that we would have someone other than a priest or minister. We wanted it to be special. Plus, and I know this is silly, but I had a child in 2002—before I was ever married—and I felt the church judged me for it. I didn’t want a priest because I didn’t want to explain to him why my ring-bearer was calling me Mommy. I’m sure the priest wouldn’t have judged, but even so, it bothered me. So, it wasn’t an option.

For my husband and me, it wasn’t a tough decision at all—but for JP, our officiant, the decision was a little harder. JP, my husband, and I all worked together at the photography studio where my husband and I met. JP had been there from the first day we met—he’d babysit my son so that my husband and I could go out on dates, he’d hang out at our apartment with us, and we considered him part of our family.

JP is Lutheran, attends church regularly, reads and quotes the bible, and in my eyes, he is a religious figure. The problem for JP is that his dad is a pastor, his mom is a minister, her father was a pastor, and for his whole life, his family thought he should follow this lifestyle. JP didn’t want that life. He was a photographer, and had been trying to gain respect from his family about that for years.

Then we ask him to become ordained—an act he had been dodging forever. He decided to do it because he considered us family and agreed we should have the opportunity to make the day special. That said, to this day, his family doesn’t know that he is an ordained minister. He didn’t do it for them. He did it for my husband and me. And that is really very special.

JP told the story about when Cameron and I first met, and what he saw in us. He described how we would act together in the early days, and how we became so close as years progressed. It wasn’t a customized template—it was our story, from the eyes and heart of our best friend. You just can’t beat that.

If you’re interested in becoming an officiant, or having someone ordained for your own wedding, it turns out that the process, according to everyone we spoke to, is unbelievably—almost scarily—easy. It varies from state to state, but for most, it’s fast and painless and can be done online. You can find more information here. Here’s hoping you’ll have an experience as sweet and personal as these five lucky couples!