After hearing this movie’s synopsis, it only makes sense to ask: Is Unpregnant on HBO Max based on a true story? Well, the answer isn’t your straightforward “yes” or “no.” Technically, the new road-trip comedy film is adapted from a young adult novel of the same name by authors Jenni Hendriks and Ted Caplan. But just because Unpregnant‘s source material is a work of fiction doesn’t mean it’s not rooted in real-world events!

Much like in the HBO Max adaptation—which stars actresses Barbie Ferreira and Haley Lu Richardson—Unpregnant follows the story of Veronica, a high school student who wants an abortion after learning she’s pregnant. There’s only one problem (well, a few problems). She lives in Missouri, where minors require their parent’s consent to receive the procedure. Veronica worries how her parents, who are very religious and conservative, would react. This leaves her with the next best option: find a way to get to the closest clinic that doesn’t require parental consent. And in Veronica’s case, that’s across state lines in New Mexico. The other problem? She doesn’t have a car of her own, and asking her “less-than-optimal” boyfriend to take her there doesn’t feel like an option. So the teen enlists the help of an unlikely road partner instead, her ex-best friend, Bailey.

Anyone keeping up with the news would know that this story about reproductive rights—while colored with unique characters and plotlines of its own—is all too familiar. But author Hendriks was determined to tell an abortion story full of agency and humor. In an interview with The Book Goat, Hendriks recalls the news broadcast from NPR that gave her the idea: “A report came on about South Dakota proposing a law that would make people wait 72 hours before getting an abortion, which considering how far people had to drive already would be a huge burden. And I thought, holy sh*t, what would you do,” she recalled. 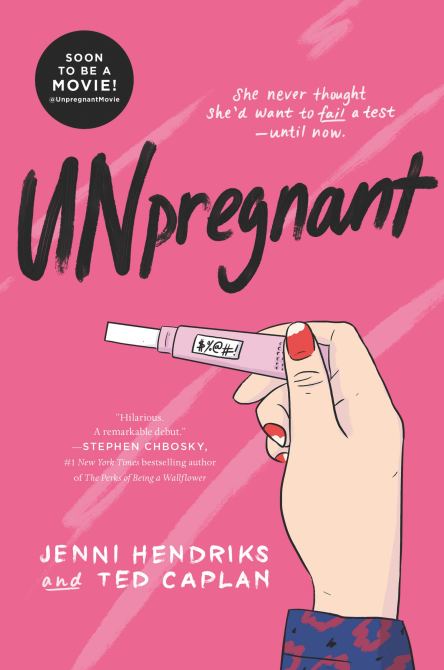 Her next idea was unconventional. She remembered thinking, “that would be an insane road trip to take with your best friend,” which prompted the writer to reach out to Caplan. “I texted Ted and he was like, “Um, that sounds really depressing.” And I texted back, “No! We’ll make it funny!” Because when I get really angry about something, I make jokes about it to make myself feel better.”

When it comes to Unpregnant on HBO Max, Hendriks’ humor certainly translates. The streaming platform shared the film’s first official trailer on September 10. In it, viewers can catch some of the comedic gems from Hendriks’ and Caplan’s novel that made the script. When Veronica approaches Bailey for a ride to Planned Parenthood in New Mexico, for example, she replies: “Oh, I get it. Everyone has different types of friends. There’s your BFF’s, your friends with benefits…and I’m your abortion friend!”

Let’s just say that the journey stays fun, putting an empowering if not refreshingly casual spin on abortion rights. The biggest blunders along the way don’t even come from that subject; instead, the young women find themselves encountering shop strippers, stolen cars, speeding trains, and, well, themselves.

Unpregnant is available to stream on HBO Max as of Sept. 10.