Master organizer Marie Kondo has the ability to just roll up delicates like underwear, bras and more to make any drawer look like an artistic masterpiece. I, however, need a little more help than that. My dresser drawers typically look like someone threw up in them, which is why I can’t ever remember that there’s a pair of underwear with price tags on it that I still haven’t worn shoved somewhere in the back. My underwear drawer is also where I store random important things like my passport, which is probably a conversation for a different time.

Needless to say, I’ve been in need of a serious organizational reboot for a long time, and underwear organizers have been top of mind. Luckily, if you can dream up a need for something, chances are it’s already being sold on the internet. When I came across this set of underwear organizers for under $16, with almost 38,000 perfect ratings on Amazon , I knew I had to spread the word.

Shoppers say the best part about this find is that you get four different-sized organizers with different shaped dividers in each set. Instead of putting together different pieces that raise the price tag, it’s a simplified one-and-done purchase. Plus, the drawers are made of soft woven fabric and are totally bendable and flexible, making it super easy to fit inside a drawer and move it around. Still, they hold up once you have them in place.

“I was so surprised at how sturdy these organizers are,” wrote one shopper. “They have a zipper at the bottom to “lock” them into place. They don’t flex after you do that.” 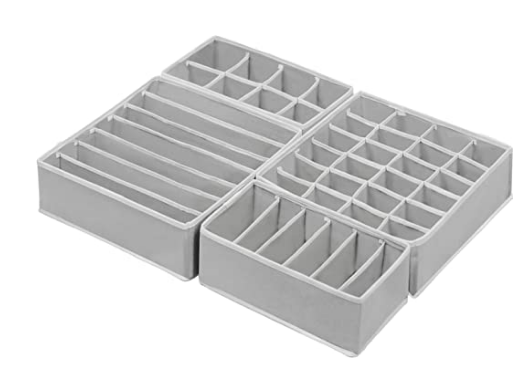 Another shopper loves that these dividers take the leg work out of staying organized. “It takes literally seconds to drop the socks into its compartment. I am not the most organized person in the world but this takes zero effort,” they wrote.

You can pick these up for the whole family, as they come in different colors to match different design elements. You can grab them in blue, black, brown and even pink , in addition to the gray color shown above. Overall, $16 is a small price to pay for something that helps you save time and “find things easier and faster,” as one shopper wrote.

Some shoppers wrote that they picked them up for the recent grad heading off to college, which makes them a great gift idea for someone who seemingly has everything.