Tyra Banks is officially the maximalist hero we didn’t know we needed.

This morning, the former model and star of the upcoming film Life Size 2, stepped out in one hell of an outfit. She sported a pink and navy striped blouse; pink, green and black plaid plants; and a leopard print jacket. As if that wasn’t enough, Banks topped off her look with a black, white and tan (striped!) fur stole.

Like we said, the maximalist hero we didn’t know we needed.

Though the outfit is mesmerizing in and of itself (like, strangely so), the most fascinating part about this ensemble is how good Banks looks wearing it.

The similar color palettes of the striped blouse and plaid pants keep them from clashing, despite both prints being similarly bold. And the leopard print jacket’s pared-down palette keeps it from overwhelming the look. 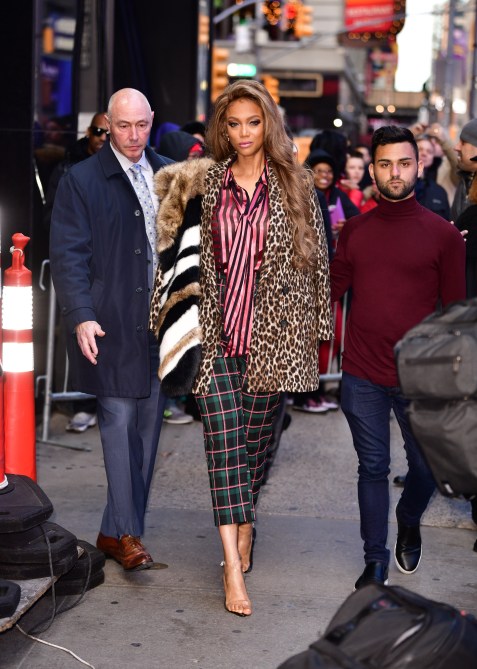 Still, it’s downright shocking how harmoniously these prints combined. Fashion 101 suggests that the key to mixing and matching prints is by sticking to one color palette, and then opting for patterns of different sizes; a tightly knit pinstripe won’t overwhelm a normal-sized polka dot, which in turn won’t overwhelm a large plaid.

Banks stuck to the first bit of advice but thoroughly disregarded the latter; her palette is on point, but her prints are all similarly sized. And yet, they complement, rather than clash. (The only large print featured in the look is the boldly striped fur stole, which definitely overpowers the rest of the outfit. But we love a good fur stole, so we’ll take it.)

TL;DR? Tyra Banks is such a masterful stylist she managed to go full-maximalism, disregard traditional sartorial wisdom and still make it fashion. Of course, the look is extra AF—but no one pulls off extra quite like Tyra Banks.