Earlier this month, pop sensation Lorde found herself the object of an alarming barrage of tweets that seemed to literally take over Twitter. It occurred after fans of One Direction and Justin Bieber accused the singer of calling them “not cute.” Beliebers and 1D-ers took to Twitter in attack mode, ripping apart Lorde and her 24-year-old boyfriend James Lowe. Lowe, who happens to be Asian, was the object of particularly cruel and racist taunts. 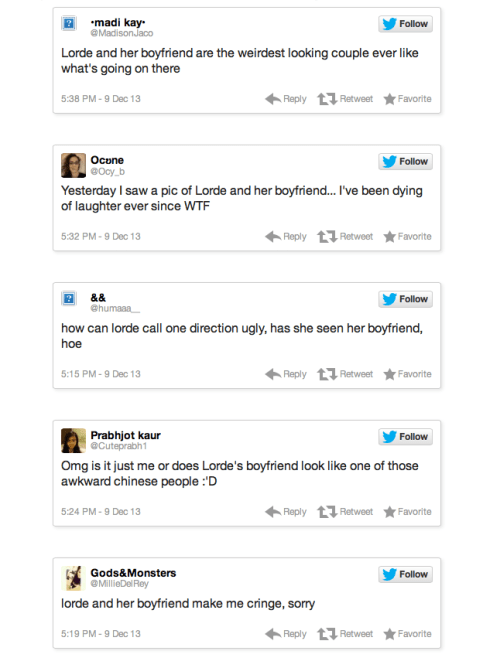 What could possibly account for such a vicious display? Call it extreme Internet fandom, and it’s on the rise, and the attack on Lorde is hardly the only recent case. Over the summer, Taylor Swift fans threatened the lives of a T-shirt label who created a top mocking TSwift’s many boyfriends, and they got Abercrombie & Fitch to stop selling a silly graphic tee directed a Swift. There also was an instance where Bieber fans tried to take out Black Keys drummer Patrick Carney for criticizing the Biebz. Oh, and the time that fans freaked out over the Rob Pattinson/Kristen Stewart breakup and threatened to kill themselves.

MORE:  Lorde on Suddenly Getting the Royal Treatment: ‘The Irony Is Not Lost On Me’

Social media has certainly made it easier than ever for young fans to connect with their favorite artists, which is a great thing, except when, well, it’s not.

“Fandom is nothing new,” said Rachel Busman, a clinical psychologist at the Child Mind Institute, but points out that it’s changed over the last fifty years, and with the rise of Internet culture, it’s morphed into a strange new beast.

“The biggest difference between earlier decades and now is you didn’t have constant information thrown at you, and you didn’t have the ability to instantly communicate about what and where your favorite artist was going. Marketers are very savvy to this and speak directly to this age group. They create loyal and devoted followers who feel a sense of dedication to these groups,” said Busman, who has studied Internet fandom, particularly in connection with the band One Direction.

Teens have been obsessing over their favorite teen idols for decades (Proof: Elvis Presley, The Beatles, New Kids On The Block), but what’s changed is the medium. The amount of access these kids now have to their favorite celebs—and each other—is unprecedented. Suddenly, @MyCyrusChanel can reach out and connect with other Miley Cyrus fans, or, alternately, go on an anonymous  rampage against Cyrus haters. Twitter user @gomezsparadise can spend hours tweeting at Selena Gomez, asking fellow fans for a Twitter follow, and might even feel as if she’s acting as an extension of Gomez herself.

MORE: Who is Lorde? 5 Things to Know About the Singer Behind the Hit, “Royals”

And that, coupled with the complete lack of accountability for what’s said on social media, can often lead to disaster.

“Once you tweet a few words it just takes on a life of its own,” says Busman. And the anonymity that comes with online behavior means there are rarely consequences for poor behavior. Case in point: Lorde’s Twitter attackers, most of whom continued to tweet about mundane things as if nothing happened.

“These kids aren’t thinking about what they’re tweeting now. There isn’t a sense that ‘oh, this will stay with me.’ Their brains are still developing, and they haven”t fully developed their impulses yet. They’re not thinking in the moment about how what they’re tweeting is going to impact them in the long run,” explains Busman.

So why do they do it? “I think everyone wants a sense of connection. Kids at this age are establishing a sense of identity and what’s important to them, and it’s not surprising that they’d want to be connected to an artist who speaks directly to them,” said Busman. So when Lorde allegedly called the boys of One Direction “not cute” it was as if she was twisting a dagger right in the heart of every 1D fan.

Jean Twenge, the author of The Narcissism Epidemic  agrees. “[These young people] consider the celebrity as part of their own identity, and they defend the celebrity just as they would defend themselves,” she said.

However, Twenge believes there’s something increasingly alarming about how today’s adolescents so aggressively express their support for these stars. She believes it correlates to an overall shift in younger generations’ personalities. “They’re less empathetic over time. Which makes them more aggressive, particularly after they’ve felt insulted or threatened,” she told us.  One reason for the change? The rise of individualism. “We tell kids they’re special, and give them tons of individualist advice, and we cultivate narcissism. The Internet, and reality TV glorifies narcissism, and celebrity culture in general.”

So, when they attack online, they often disassociate their actions from the people they’re harming. “They are not thinking that these are real people. Lorde is a real person and her boyfriend is a real person,” says Twenge, who advises that fervent fans should remember the influence that Twitter and social media wields, even if they think it’s a quick harmless post. “It’s powerful, and it’s power that people didn’t used to have. And that can be used for good ends, but it can be used for very bad ends as well.”

According to Dr. Robert Epstein, this power is precisely why Twitter has become such a popular sounding board for tweens and teens.

“The music and fashion industries nurture teens’ obsessions with one icon after another,” said Epstein—a professor of psychology at the University of the South Pacific, a senior research psychologist at the American Institute for Behavioral Research and Technology, and the author of  Teen 2.0 .  “No matter how competent teens are, we trap them with their peers 24/7 and don’t let them enter the adult world in any meaningful way.  Many get frustrated or depressed or angry as a result, and they exercise power in any way they can. In recent years, social media has become a major power outlet for teens, even though it actually gets them nothing except a little attention.  So when Lorde or anyone else for that matter trips up, or at least appears to trip up, they pounce in large numbers. It’s a pathetic way to demonstrate power.”

Pathetic or not, it still has bite.

So what can be done? Busman thinks that it’s up to parents to step in and make a difference. “Kids aren’t developed enough to ask for what they need,” she says. “Parents shouldn’t just give up. Parents should have open conversations with kids and take an active interest in what their kid is listening to.”

Meanwhile, the remnants of teens’ fervent fandom—and any social media bullying—will stick around long after they grow out of their obsession with One Direction, or Justin Bieber, or Miley Cyrus. Twenge pointed out that people who did any bullying before the rise of the internet might look back with shame, but it usually doesn’t tangibly stick around forever. “Social media [however] has a much deeper footprint,” she said.