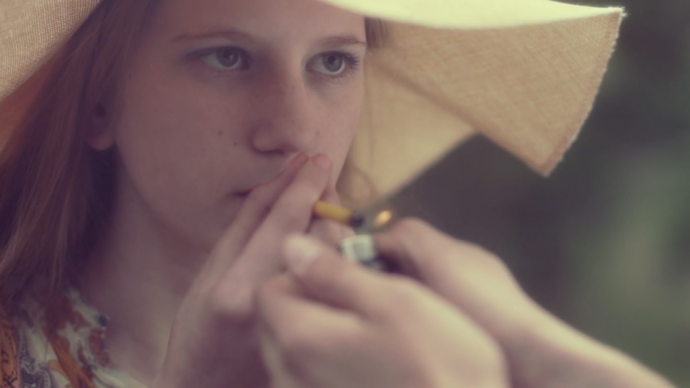 We’re big fans of fashion films here at StyleCaster, so we can appreciate how easy it is to get swept up in the excitement of a new clip — only to miss what’s actually happening on the screen.

Just recently, we watched a new fashion film from New York-based label Tucker by Gaby Basora, showcasing their Summer 2012 collection. To our delight, we discovered that the new stylish short was shot by one of our favorite fashion film and music video directors, Kinga Burza.

You might be familiar with Kinga’s fashion film for Kate Spade, “seven henrietta street,” which we featured right here on StyleCaster. Or there’s a good chance you’ve seen one of her videos for artists like Katy Perry, Calvin Harris, The Teenagers or La Roux.

If you’re a huge fan of Kinga’s work, then you’ll know that she has a knack for catching girly charm and pre-adolescent innocence on film. No surprise, then, that this brand new fashion film happens to catch both of those characteristics dead-on.

Honestly, what’s not to love about this latest film, which depicts two tween girls whose babysitter (played by Tennessee Thomas) leaves them on their own to run amok within a house full of clothes, jewelry, make-up and marshmallows? The two girls also happen to meet a few boys during their afternoon adventures, breaking out and offering up their mom’s colorful cigarettes for laughs and giggles.

While we’re not exactly fans of underage smoking (the brunette girl lighting up is 13-year-old model Alyena Koehler from L.A .Models, which confirmed her age to us), we still loved watching every second of it.

That said, we were curious to get designer Gaby Basora’s take on the rather scandalous move — especially considering underage models and their working conditions have become a hot topic in the industry of late, sparking the creation of organizations like The Model Alliance and the installment of new guidelines from the CFDA around models under 18.

Basora told us that she felt Kinga “could capture Tucker’s vision,” and defended the filmmaker’s decision to push the limits in the video:

If you’re going to do a film with Kinga Burza, marketing is only a handmaiden to creativity. In this case, Tucker wanted to express a nostalgic innocence with a coming of age moment. It’s is all about flirting with boundaries. The initial treatment imagined other situations, perhaps a bit more risqué than stealing one of mommy’s colorful Nat Sherman’s, but we thought this was appropriate for the narrative. These girls are beautiful in their Tucker and they have a conscience … the shaking hand makes the smoking itself beside the point, don’t you think?

Like we said earlier, we loved watching the film and are typically in favor of allowing some artistic license when it comes to these things, but we also couldn’t help noting that these are the types of images and issues that have, of late, forced the industry to ask itself some questions.

So we’ll put it to you all: What are your thoughts on the film? Let us know by giving us your two cents by leaving a comment underneath.