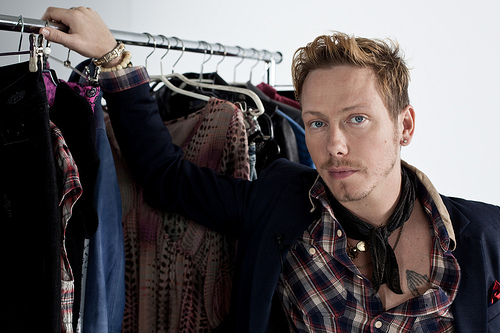 The man behind Blair Waldorf and Serena van der Woodsen’s unforgettable style is getting his own show! Eric Daman has teamed up with Swarovski for an online reality series that will document his hectic life. “The Daman Chronicles” (I totally knew that would be the name) will follow the celebrity stylist around New York as he meets with famous friends, preps shoots and gets ready for upcoming television seasons.

Daman has an incredible resumé, so if anyone deserves a show, it’s him. He’s assisted Patricia Field, was discovered by Steven Meisel, modeled with Kate Moss and worked with the likes of Mario Testino and Peter Lindbergh. Needless to say, he probably has a lot of knowledge about the industry and a ton of stories to tell, which he’ll hopefully let us hear on the show.

“The Daman Chronicles” will be exclusively distributed on Cambio, which is an online platform for teens and young adults (kind of reminds me of a teenage girls’ MySpace page, with a lot of pink and black). With the show set to premiere June 19th, I’m hoping for some cameos from a few Gossip Girl stars and maybe an explanation on why Daman chooses to wear that handkerchief around his neck all the time (seriously, stop it!).

Check out a sneak peek of the show on Cambio and let us know if you’ll be tuning in by leaving a comment down below.