It’s 2019–but society is still obsessed with forcing women into certain boxes. In her newest film, Where’d You Go, Bernadette, Troian Bellisario is ripping down the barriers that have been placed around women. In the film, which is based on Maria Semple’s 2012 novel of the same name–we meet Cate Blanchett’s, Bernadette Fox. An architect who hasn’t practiced her craft in two decades–Bernadette has become a reclusive outcast in her Seattle community. Her sole concerns are the care of her daughter, Bee, and trying to hold on to the last remnants of her identity.

After becoming increasingly anxious about an impending family trip to Antartica–Bernedette vanishes–much to the horror of her daughter and husband, only to find herself on a once-in-a-lifetime adventure. Along the way, she meets Bellisario’s Becky–a whip-smart scientist traveling to the South Pole. Becky’s enthusiasm for her work invigorates something within Bernadette that she thought was lost long ago.

Ahead of Where’d You Go, Bernadette’s premiere–STYLECASTER sat down to chat with the Pretty Little Liars alum about the film, her epic kayaking adventure and bonding with Cate Blanchett.

“I was so grateful that this movie was about family,” Bellisario revealed. “It was about a woman’s relationship to her art –about a woman’s relationship to her daughter, and to her self. To be apart of it and particularly to play a scientist, it was pretty amazing. Coming from Pretty Little Liars, I would wake up out of bed, and I would have two hours of hair and makeup. With [Bernadette], I was shooting the biggest movie that I would ever be on, and they were like, ‘Here’s a beanie, and here are some dorky wraparound sunglasses– go Arctic kayaking.’ I was like, ‘This is amazing.’ It wasn’t us trying to be glamorous. It was just, go out there and do your tests. That’s what’s important. It’s not about how you look. It’s not about the style that you’re into. It certainly was not stylish being in a wetsuit in the middle of the Arctic.” 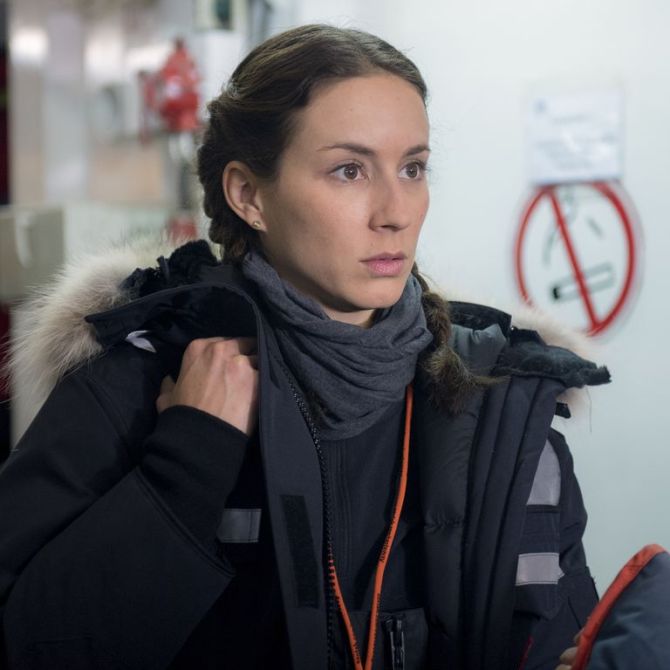 In the film, Bellisario and Blanchett’s characters sit in these tiny kayaks in the blistering cold artic chatting about life, work, and their passions. Though it’s a beautiful scene–the Los Angeles native made it clear that it was certainly not as magical as it may have looked. “We took some kayaking lessons which was really helpful,” she laughed. “Stopping on a mark in a kayak is impossible–you just keep moving. And there were several moments when I crashed into the camera or Cate that we don’t need to talk about. At one point we were shooting in glacial water for five hours straight. I was dipping these test tubes in the water, so my hand was bare –you would usually wear gloves. There was a certain time when I told Rich [Richard Linklater], ‘I can’t hand this off because my hand is frozen.’ My hand almost died.”

Still–despite the frigid conditions, it’s films like these that speak to the kind of work the Suits alum wants to continue to do going forward. “Since I’ve recently become a mother, I’ve been taking a bit of time to be with my daughter,” she explained. “While I was pregnant, I was writing a lot, so I have a show that’s been sold right now to a production company. I’m really hoping at some point we get to go into production on that. And then, I don’t know what the future holds.”

Watch STYLECASTER’s complete interview with Troian Bellisario–we chatted Where’d You Go, Bernadette deets, whether she would ever star in a Suits spin-off, and her dream co-star.