It seems Tristan Thompson is relatively unfazed by the drama surrounding him since his reported cheating scandal almost two weeks ago. Does Tristan Thompson have a new girlfriend following the Jordyn Woods and Khloé Kardashian cheating scandal? Kylie Jenner lost her best friend; Khloé Kardashian was betrayed by her child’s father, and the NBA star has flown to New York, where he stepped out with a new woman on Wednesday, February 27. Thompson was seen at Carbone in NYC with a woman who seemed as though she was his date, according to photos obtained by TMZ.

However, upon further inspection it seems the woman was perhaps there with one of Thompson’s Cleveland Cavaliers teammates—not with him. He posted an Instagram from his delicious Italian dinner, and as you can see— the woman is across the table. (See her hand on the glass?) She’s sitting at the same table at Thompson but across from him.

And witnesses from Carbone that night said Thompson was dining with at least three other people. So the mystery woman may have been with Thompson’s teammate, Jordan Clarkson. Or perhaps she’s just a friend. Who knows? 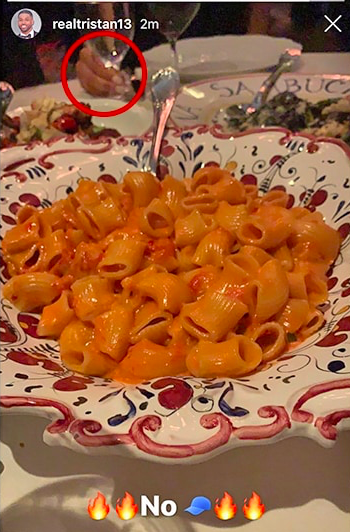 What we do know? Thompson is done with the Kardashians. Earlier in the day, Thompson was out and about with a hoodie with the phrase, “The Eagle Soars Alone.” That pretty much says it all.

Woods is on the outs too. The 21-year-old model moved out of Jenner’s home following the Thompson scandal. “It will be very hard for Kylie to lose Jordyn because she’s her best friend,” a source previously told Us Weekly. “She doesn’t have a lot of friends and, honestly, can’t because of her lifestyle, so she has latched onto Jordyn.”

The friends started 2019 off with a trip to a dream beach vacation.

Despite the drama, there are some Twitter fans still have doubts that any of this is real:

The Twitter user continued, “‘So basically celebrities live completely different lives than ours, but try to make themselves relatable to us (cheating). Part of this theory is that everything presented to the public is fake. Their relationships, friendships, & even some pregnancies are FAKE.”

Definitely a complex theory…seems intense and kind of life-altering for Woods.

Others are here for the ride: