After a tragic incident at his Astroworld festival left eight dead and hundreds injured, rapper Travis Scott‘s net worth may now be facing some changes.

Scott founded Astroworld Festival in 2018, naming it in honor of his album of the same name which was released that same year. The “Sicko Mode” rapper, who shares daughter Stormi Webster with Keeping Up With the Kardashians alum Kylie Jenner, held the 3rd annual Astroworld Festival concert on November 5, 2021. The concert ended up being a “mass casualty event,” with eight people between the ages of 14 and 27 left dead and over 300 hundred others injured (including 11 who suffered cardiac arrest) following a crowd surge among the over 50,000 attendees.

Shortly after the incident, lawsuits began pouring in from the victims’ families against Scott and his concert organizers—including one filing from the family of a 9-year-old boy who ended up in a coma after being trampled at the concert. So, where does this all leave Scott? Keep reading for everything we know about Travis Scott’s net worth and his earnings amid the tragedy below.

What happened at the Travis Scott concert?

According to Houston Fire Chief Samuel Peña, tragedy struck at Scott’s Astroworld Festival at around 9 p.m. on November 5, 2021, when around 50,000 concertgoers began compressing toward the stage at NRG Park. “The crowd began to compress towards the front of the stage, and that caused some panic, and it started causing some injuries,” Peña said in a press release on November 6, 2021. “People began to fall out, become unconscious, and it created additional panic.” Police and firefighters officially went on to declare the concert a “mass casualty” event by 9:38 p.m., just 32 minutes after Scott’s set began.

As the crowd continued to surge, festival organizers reportedly agreed to cut the concert short, according to the Houston Chronicle. However, the show went on as originally planned, with Scott completing his setlist and finishing on schedule at 10:15 p.m. By the end of the night, eight people—including two high school students—ended up dead, while over 300 others sustained injuries.

Scott, for his part, claimed to be completely unaware of the deaths that took place in the crowd that night. He took to Twitter following the incident to express his condolences to the affected families, writing, “I’m absolutely devastated by what took place last night. My prayers go out to the families and all those impacted by what happened at Astroworld Festival. Houston PD has my total support as they continue to look into the tragic loss of life.” He continued, “I am committed to working together with the Houston community to heal and support the families in need. Thank you to Houston PD, Fire Department and NRG Park for their immediate response and support. Love You All.”

How much does Travis Scott make from Astroworld Festival? 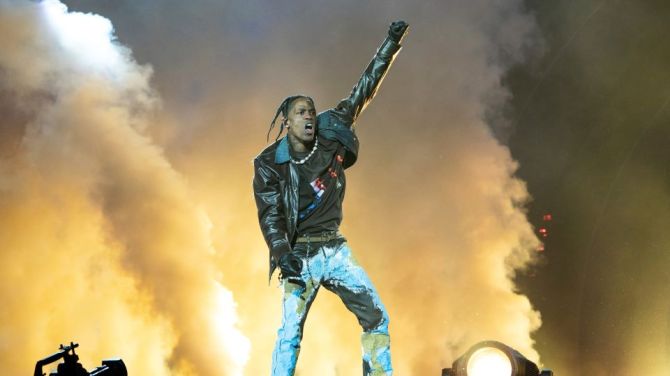 Since launching Astroworld Festival in 2018, Scott has earned millions from the annual concert event. According to Forbes, Astroworld grossed a total of $53.5 million in 2019 alone. While the festival was canceled in 2020, it still sold out prior to its cancelation. Initial earnings from his 2021 Astroworld festival, meanwhile, have yet to be disclosed, but Celebrity Net Worth reports that the rapper has made around $65 million overall from the festival.

These earnings may dwindle, however, as sources told Variety on November 8, 2021, that Scott planned to provide full refunds to all who purchased tickets to the 3rd annual Astroworld event. Reports at the time also revealed that the Houston rapper pledged to cover the funeral costs for the eight people that died at his event, as well as provide additional aid and access to mental health services to those affected by the tragedy.

Concert organizer Live Nation confirmed the decision to offer full refunds in an additional statement at the time: “We wanted to provide an update on the steps that Scoremore, Live Nation and the Astroworld Fest team have been taking. Throughout the weekend, we have been working to provide local authorities with everything they need from us in order to complete their investigation and get everyone the answers they are looking for,” the entertainment company tweeted on November 8, 2021. “Our staff has met with local authorities to provide information, and we have also provided them with all footage from our CCTV cameras. Load out of the site and equipment is currently paused to give investigators the time they requested to walk and document the grounds. Full refunds are being offered for all those who purchased tickets.”

Their statement continued, “And most importantly we are working on ways to support attendees, the families of victims, and staff, from providing mental health counseling to setting up a health fund to help with costs for medical expenses. Our team is mounting alongside the community.”

Live Nation, however, did not issue a statement at the time on the pending lawsuits against them or Scott. According to attorney Thomas J. Henry, who began representing over 65 victims in a lawsuit against Scott, Live Nation, NRG stadium and guest artist Drake, the damages could amount to “billions” following the tragedy. “More and more injured victims are contacting my firm by the hour,” Henry shared in a statement on November 10, 2021. “While we are all still working to understand the full scope of the Astroworld tragedy, I believe the damages suffered by its victims could total in the billions.” Of course, this could have a serious impact on Scott’s net worth, included below.

According to Celebrity Net Worth, Travis Scott’s net worth in 2021 is $60 million, making him one of the highest-paid rappers in the world due to his lucrative album sales, touring revenue and partnership deals with brands like McDonald’s and Fortnite. His partner, Kylie Jenner, is worth a whopping $700 million by comparison, per Forbes.