There are a lot of rumors about the Kardashian-Jenners, but very few are important enough for them to respond to. One such rumor was the recent claim that Travis Scott cheated on Kylie Jenner after a photo surfaced of him with another woman.

The photo, which features a man who looks like Scott on a balcony with a mystery woman in a bikini, was posted on Instagram on Monday. To make matters worse, the person who posted it, who many believe to be the woman in the picture, captioned the picture, “Nobody likes me but yo baby daddy keeps me icy.” It didn’t take long for fans to turn on Scott and assume that the woman’s caption was a nod to Jenner and her and Scott’s 10-month-old daughter, Stormi Webster.

But how much of the picture can we believe? Well, according to Scott, none of it. After a fan asked him about the photo on Instagram, Scott commented back, denying that he cheated on Jenner and claiming that the picture was photoshopped. “Trolls working hard today,” he wrote. “I don’t be on a balcony wit no thots. That shit lame. Try again u trollsssss. Me and my wifey sturdy. Back to celebrateing !!!” He added, “Only got love for my wife. No time to be wasting. Try again.”

After his comment, the Goosebumps rapper also took to his Instagram to further deny the rumors, slamming the “trolls” for creagting “fake shit” to “destroy real love.” “Trolls always wanna create some fake shit to destroy real love. GOING OVER BOARD TO MAKE SHIT LOOK LIKE [IT’S] NOT IS EVIL,” he wrote. “I hate acknowledging shit. But quit try to take joy from shit that’s good. I pray god blocks out all evil.” 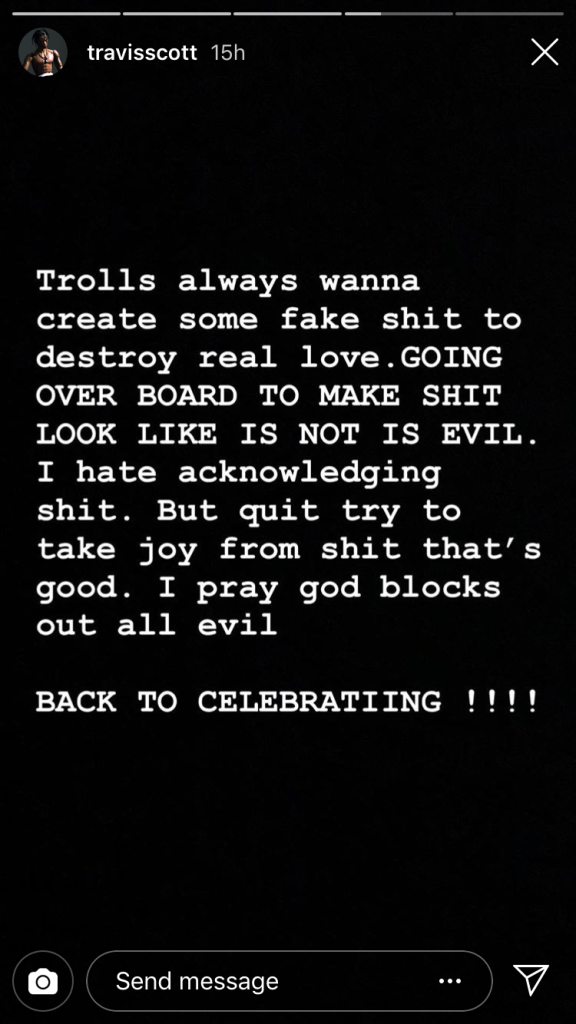 The rumors came a few hours after Jenner sparked engagement rumors when she included a diamond-ring emoji in a picture of her and Scott. The couple have also been calling each other “wifey” and “hubby” for the past few mothers, further fueling the rumors that they’re engaged.

And though we don’t know if Scott and Jenner are actually walking down the aisle soon, we do know that Scott has only been faithful to the mother of his child. And that’s that on that.