Not the first time. Travis Scott‘s criminal charges for past concert incidents have resurfaced following the tragedy at the rapper’s Astroworld Festival performance. As it turns out, “reckless” and “disorderly” conduct at concerts isn’t new for Scott.

According to past reports, Travis Scott has a history of inciting riots and violence at his concerts. This behavior has led the 30-year-old rapper to be arrested twice and sued on multiple occasions. Scott’s first offense took place in 2015 at Lollapalooza in Chicago, when the rapper encouraged the audience to climb over security barricades and storm the stage. Footage from the concert shows Scott telling the crowd, “Middle finger up to security right now,” before leading his fans in a chant of “We want rage,” per Rolling Stone. Thankfully, nobody was injured at the time, as authorities quickly intervened to stop the concert. Scott, for his part, pled guilty to reckless conduct charges and was sentenced to one year of court supervision following the incident.

In 2017, Scott was arrested a second time following a concert in Arkansas, when the Rogers Police Department claimed that he once again “encouraged people to rush the stage” during the show, according to Billboard. The rapper was charged with three misdemeanor charges for disorderly conduct, inciting a riot and endangering the welfare of a minor at the time, however, the latter two charges were dropped when Scott pled guilty only to disorderly conduct as part of a plea deal in 2018. According to the Los Angeles Times, the rapper also paid over $6,000 in fees to two people who were injured at the concert.

Just weeks after this incident, another occurred when 23-year-old fan Kyle Green was pushed from a third-story balcony at one of the rapper’s shows in New York City after Scott reportedly encouraged fans to dive into the crowd. The fan ended up being partially paralyzed from the fall and sued the “SICKO MODE” rapper following his injuries. While Green was eventually able to walk again, his attorney told Rolling Stone that he still has “significant, significant disability” and remains “partially paralyzed still.”

Given the rapper’s alarming history of arrests, it makes sense that many are wondering if he will face similar—or worse—charges following the tragedy of his Astroworld Festival event. Already, lawsuits against the rapper and his guest performer, Drake, are piling up from the victims’ families. Keep on reading below for what we know about the potential charges against Scott.

Will Travis Scott be charged for the Astroworld deaths? 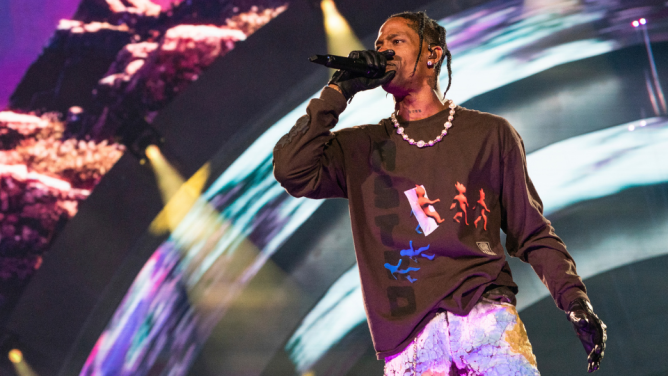 Tragedy struck in the rapper’s native Houston during his Astroworld Festival performance on November 5, 2021, when around 50,000 audience members began surging toward the stage. The crowd surge left eight people dead—including two high school students, aged 16 and 14. Harris County and Houston city officials also reported that more than 300 people were injured at the festival, among them at least 11 people who went into cardiac arrest. But will Travis Scott be charged for these deaths and injuries?

As of now, the rapper has yet to face any criminal charges—but that doesn’t mean there aren’t any coming down the line. According to Houston Fire Chief Samuel Peña, many of the injuries sustained at Scott’s concert were caused by the audience pressing toward the front of the stage. “The crowd began to compress toward the front of the stage, and that caused some panic and started causing some injuries. People began to fall out and become unconscious and that created additional panic,” Peña said at the time, according to The Hollywood Reporter. If it’s proven that Scott encouraged this crowd surge, the rapper could indeed face charges for inciting the crowd’s behavior. For now, determining how much Scott knew about the crowd’s situation will be an important part of the Houston Police Department’s investigation, according to CNN legal analyst Jennifer Rodgers.

Scott could also be held to scrutiny given that he was reportedly briefed on safety considerations prior to the concert. Houston Police Chief Troy Finner released a statement following the incident, noting that he had a “brief and respectful” conversation with Travis before Astroworld Festival to discuss his concerns. “I met with Travis Scott and his head of security for a few moments last Friday prior to the main event,” Finner said in a written statement on November 8, 2021. “I expressed my concerns regarding public safety and that in my 31 years of law enforcement experience I have never seen a time with more challenges facing citizens of all ages,” he wrote, referencing the global pandemic and ongoing social tensions throughout the nation.

“I asked Travis Scott and his team to work with HPD for all events over the weekend and to be mindful of his team’s social media messaging on any unscheduled events,” Finner continued. The Police Chief ended his statement by confirming that the department’s “criminal investigation” is ongoing before asking “for everyone to be considerate of the grieving families during this incredibly difficult time.”

According to legal analyst Rodgers, this conversation may play a role in whether or not Scott is found criminally liable. “One of the keys is whether what happened is reasonably foreseeable,” she told CNN. “If you’re told about a risk in advance, that makes it much more foreseeable.” Rodgers added, “If he saw something that was happening, he had a duty to stop the show.”