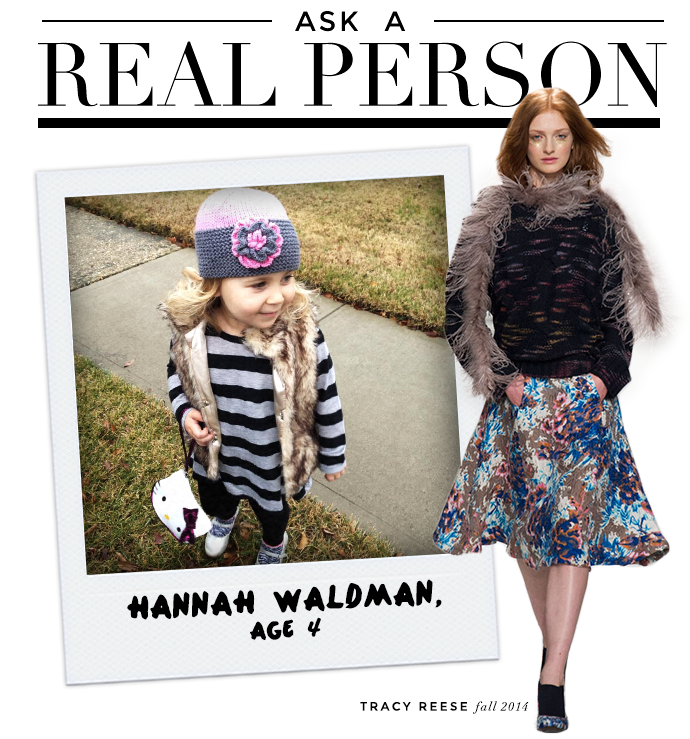 We’re pretty confident the headline you just read pretty much tells you everything you need to know about what’s to come.  Just in case you’re still unclear, however, here’s a primer: During New York Fashion Week, we occasionally like to ask a real person—i.e., one that doesn’t work in or follow fashion—to share their thoughts on a particular look from any given runway show.

Why? Because sometimes it’s key to remind ourselves that the world doesn’t revolve around the fall collections and preening packs of street style stars this week.

Next up: Hannah Waldman, the 4-year-old daughter of our editor’s friend. We showed Hannah a look from Tracy Reese Fall 2014, and here’s what she had to say.

Who is Tracy Reese? Do you know her?
NO.

Where do you think this girl is going?
A party … A birthday party. [Examines photo]

Maybe I was wrong
You were wrong.

MORE: What a 7-Year-Old Thinks About Creatures of the Wind 2014

Would you wear this look to school?
Yes, because I think my friends would like it. And because [her friend from school] Dean’s favorite color is blue.

Why does this girl have sparkles on her face?
Because she got it painted when she was at another party.

MORE: What Our Building Manager Thinks About Opening Ceremony Spring 2014