Never too old for a ball game with dad! Tom Cruise’s son Connor joined the Mission Impossible star for a rare family outing together in California, where the pair watched the Los Angeles Dodgers face off against the San Francisco Giants.

At one point during the game, which took place on Saturday, October 9, Cruise was spotted on the Jumbotron—and he wasn’t alone! The 59-year-old Top Gun actor was seated next to his son, 26-year-old Connor Cruise. While the elder Cruise flashed a smile for the cameras, his son could be seen chatting with other fans sitting next to him, according to Us Weekly. You can see Tom Cruise’s son Connor sitting next to him on his left in the photo below.

The Edge of Tomorrow share shares his son Connor with his ex-wife, Nicole Kidman. The former couple, who got married in December 1990 and divorced in 2001, also adopted a daughter, Isabella. While the pair rarely speak about their 11-year marriage, Kidman recently opened up about the media attention she experienced during their relationship in an interview for Harper’s Bazaar for their October 2021 cover story. 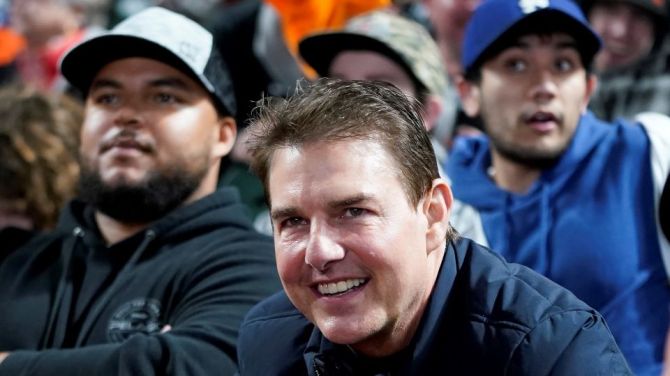 “I was young. I think I offered it up?” Kidman said when asked about the media frenzy she and Cruise faced. “Maybe I’ve gotten a bit more trepidatious, but I’m always trying to be as open as possible. I just prefer to live in the world that way.”

The Big Little Lies star went on to explain why she prefers to be honest in the public eye: “I’m wary at times, and I’ve been hurt, but at the same time I much prefer a warm approach rather than a prickly shutdown approach. My husband, Keith [Urban], says that when he met me, he said, ‘How’s your heart?’ And I apparently responded, ‘Open,'” she said, referring to her new spouse, whom she married in 2006.

Ever since she split from Cruise, Kidman has also kept her relationship with her children private. Some have speculated over the years that the Nine Perfect Strangers star is estranged from her children with Cruise due to their involvement in the Church of Scientology with their father, however, Kidman has since denied these rumors.  “They have made choices to be Scientologists. It’s our job as a parent to always offer unconditional love,” she told The Sun in 2019. These days, it looks like both Cruise and Kidman are offering that love up to their kids.