Now this is a couple we’d like to see splashed across tabloid magazine covers, if for no other reason than the sheer absurdity of it. But that’s all it is—absurd. While OK! Magazine is reporting that Tom Cruise and Lindsay Lohan are hooking up (yes—that Tom Cruise and that Lindsay Lohan), their reps flat out deny the story. A Cruise source was baffled by the suggestion, while Lohan’s rep told Gossip Cop, “It’s a lie. It’s laughable, and I even told them.”

The mag is reporting that the unlikely couple exchanged numbers in London on October 7 (she’s there performing in a West End production of “Speed the Plow”) and that they’ve been galavanting around town ever since. 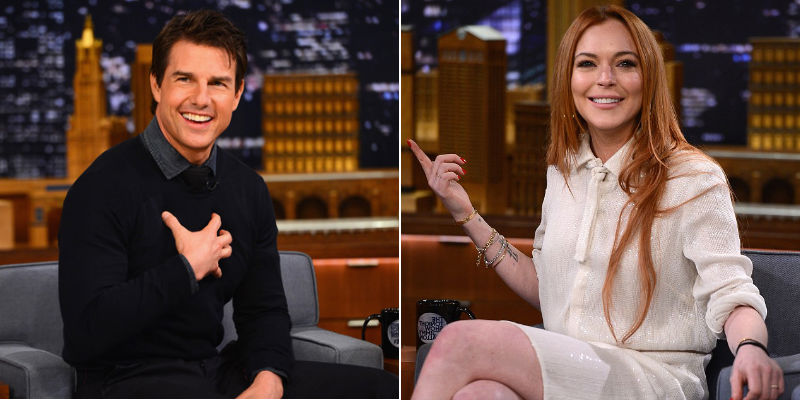 “Lindsay has been craving the security and sophistication that comes with dating an older man,” a source told OK! “So she couldn’t believe her luck when she ran into her old crush.”

In fact it’s not the first time Tom and LiLo have crossed paths. According to the mag, Lindsay met the action star when she auditioned for “Mission Impossible III” back in 2005. But while some have speculated that the audition was actually a cover for a girlfriend audition, we all know that Katie Holmes won that battle, anyway.

With Cruise’s widely known affiliation with the Church of Scientology—and aforementioned rumors that he’s maybe got something to hide by auditioning brides-to-be—was Lindsay nervous about the ramifications of getting entangled with the “Edge of Tomorrow” star? The simple answer, is no. “She’s head over heels,” the source added. And she “gushed” that Tom is the “Sexiest Man Alive.”

And how did Tom feel about Lindsay’s bad girl reputation? Well, OK!’s source has an answer for that, too: “Tom loves a party, but he’s spent his whole life focused on his career. Lindsay can definitely help him relax and have more fun.”

MORE: Is Jessica Biel Pregnant? All Signs Point To…

In a way, this couple makes sense though, right? Cruise hasn’t dated anyone in awhile, and he’s been known to romance ladies who are willing to change their ways of life to fit into his. And Lindsay could definitely use that change of pace. She’s impressionable and dying for a comeback—But at this point, Tom isn’t going to be the guy to do it.

What do you think? Are you into TomLo? Do you think it’s total nonsense? Share in the comments!