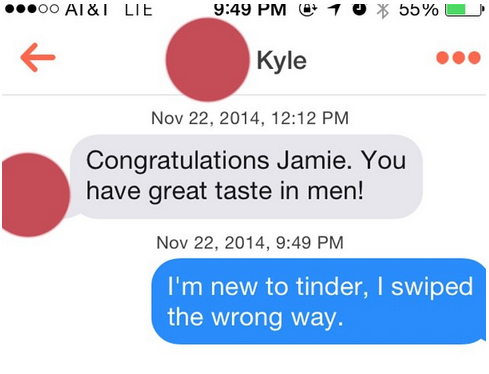 Well, this is a game changer! Tinder, the buzzy dating app behind multiple hookups and endless awkward dating encounters is just weeks away from launching a major update that will allow users to “undo” unintentional left swipes–the action that rejects a potential match. By upgrading to the newer application, called “Tinder Plus,” no longer will you have swipers regret about accidentally discarding someone that, on second thought, kind of resembled Chris Pratt.

TechCrunch reported that both of Tinder’s mobile apps recently received updates where the feature was mentioned in update text, suggesting changes are definitely on the way. However, all good things come at a price: You’ll have to cough up a one-off fee of $6.99 to upgrade from the regular app to the newer features available on Tinder Plus.

There’s a second, equally game-changing feature that makes that $6.99 price tag palatable: The paid upgrade is expected to let you search for users in other locations, whereas current Tinder users have only been able to connect with other potentials in their local area.

There are rumors suggesting more charges will be attached to unlock this additional feature, but it means you won’t be stuck searching for men in the same geographic dating pool, which is obviously priceless. Hello international boyfriend.

While you can’t download the upgrade just yet, Tinder has confirmed they’re officially on-track to launch updates in the US in March, so a new world of digital dating could be just weeks away. Stay primed, Tinderellas.