Timothée Chalamet is officially in his ‘Reputation’ era.

The actor showed up to the Oscars 2022 red carpet shirtless and in all black—I guess he decided to give everyone online a few heart palpitations before the show even began. The internet’s boyfriend is nominated for his role in Dune where he played Paul, the heir of the House Atreides. The main character on the big screen and on the red carpet.

Dune is nominated for 10 awards this Oscars season, including Best Picture, Best Costume Design and Best Hair and Makeup. It’s based on  Frank Herbert 1965 sci-fi novel
of the same title. There are six books in the Dune saga: Dune, Dune Messiah, Children of Dune, God Emperor of Dune, Heretics of Dune and Chapterhouse: Dune
.

Chalamet made a huge mark in his career starring in the film this year, given that it was such a huge production in cost and earnings. Plus, it was his third nomination for best film. He was also nominated for Lady Bird and Call Me By Your Name.

He certainly looked like the prince he plays in the glimmering Louis Vuitton ensemble. The blazer, paired with some sleek pants and his signature wavy hair, made for an entrance that we can all be thankful for. Maybe more shirtless red carpet moments could save the Awards Show season. 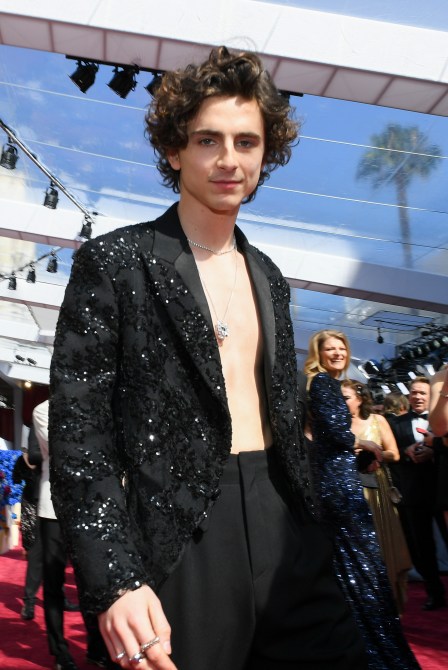 Though he didn’t have a shirt, his chest was anything but bare. He wore a large silver Cartier pendant that is as big as our love for him.

Twitter, of course, stopped in its tracks when Chalamet showed up. And users had a lot to say about the look. Some even compared it to Robert Pattinson’s look in the Twilight: New Moon promotional posters. Honestly, we see it.

There’s nothing like one heartthrob looking like another. Now, we can’t stop but thinking about how great Chalamet would be in a Twilight remake. Can we get Zendaya cast as Bella Swan please??