Over the last few years, Timothée Chalamet‘s net worth has continued to grow—and given what he’s up to these days, we doubt that trajectory is going to change any time soon.

In order to really appreciate how far Timothée Chalamet‘s net worth has come today, let’s take a quick look down memory lane. The New York native has been acting ever since he was a child, having landed his first television role in an episode of Law & Order in 2009. Following his TV debut, Chalamet began taking on more roles—both on stage and on screen. He’s enjoyed a stint Off-Broadway in 2012’s The Talls, along with reoccurring appearances in shows like the dramedy, Royal Pains, and Homeland, where Chalamet starred as the Vice President’s son. This role landed him his first nomination, for the Screen Actors Guild Award for Outstanding Performance along with the rest of his cast in the series.

The rising star continued to nab more high-profile projects after that. Among them was 2014’s Interstellar, which grossed over $675 million worldwide. In the film, Chalamet portrayed the son of lead actor Matthew McConaughey‘s character—a role that put him on the map for even greater opportunities. His breakthrough role came three years later in the film adaptation of André Aciman’s Call Me By Your Name. The film landed Chalamet his first Academy Award nomination, making him the third-youngest star to ever be nominated for Best Actor at the time.

Ever since then, Chalamet has enjoyed a pretty meteoric rise to fame. He’s starred in period films like The King, where he played none other than Henry V of England, along with the 2020 film adaptation of Little Women. He’s even hosted Saturday Night Live—all before the age of 25! And as if all  of this wasn’t already impressive enough, Chalamet was also tapped to star in the epic adaptation of Dune in 2021.

The film, which is based on the cult-classic science fiction novel of the same name, follows Chalamet’s character on a journey to save his people and, possibly, the entire universe. Clearly, a role like this is no small feat—and Timothée Chalamet’s net worth in 2021 reflects that. For everything we know about how much Timothée Chalamet is worth today, just keep on reading below.

What is Timothée Chalamet’s Dune salary? 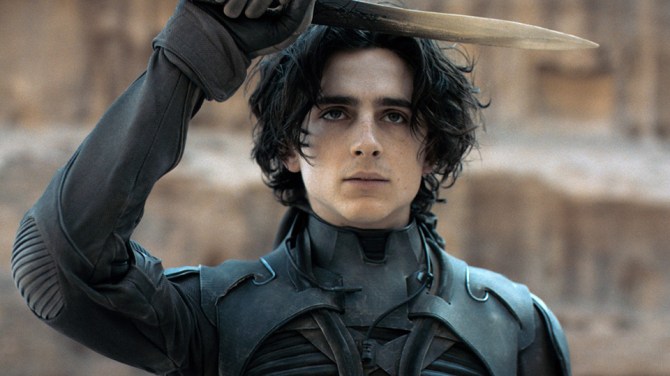 Timothée Chalamet plays Dune’s central character, Paul Atreides, a young man whose family maintains the desert planet Arrakis. While the planet itself is a wasteland, it is home to their universe’s most vital resource: melange a.k.a. “the spice,” a drug with the power of expanding one’s consciousness and lifespan, along with fueling interstellar space travel. In the film, which is based on Frank Herbert’s 1965 sci-fi novel of the same title, Chalamet’s character must take the fate of Arrakis—and by proxy, the entire universe—into his own hands.

During an interview with Deadline in August 2021, Chalamet admitted that while he always approaches his films from a personal place, there’s a special “connection” to Dune that sets it apart from the rest. “I like to think that with every film I’ve done, whether it’s Call Me by Your Name or Beautiful Boy, The King, or Little Women, the character you play is almost a piece of your flesh,” he told the site at the time. “And that’s always true, but simply from the perspective of how long the shoot for Dune was, and also the arc that Paul Atreides is on, as well as the huge love and almost biblical connection that so many people have for the book and the original film, it really felt… tectonic, if that’s the right word for it. Just getting to this finish line feels like: phew.”

So, how much was Chalamet’s salary for this major project? While there are no official reports on Chalamet’s Dune salary just yet, sites like Show Biz Galore suggest that he made a whopping $2 million for his role in the film—and that’s before any added residuals and profits from the box office, meaning his Dune salary could end up being even bigger. His Dune co-star, Zendaya, reportedly made around $300,000 for her role by comparison.

Speaking of Zendaya, Chalamet has also opened up about what it was like starring alongside her. Zendaya, who plays his love interest Chani in the film, will have a larger role in the Dune sequel: “Chani will play a huge role in the next film. I don’t know if there’s a script yet, but just based on the book, along with Lady Jessica [Rebecca Ferguson], they have a lot to do together, let’s put it like that,” he told Deadline. “Zendaya was incredible in this movie; the moment she pulls the mask down, it felt properly showstopping and powerful. I was hiding behind the camera, counting my lucky stars, because I was there in month two of the shoot, and here was a total powerhouse just coming in for the first time.”

How much is Timothée Chalamet’s net worth in 2021?

Timothée Chalamet’s net worth is $10 million as of 2021, according to Celebrity Net Worth. Just to give you some perspective on this, Chalamet’s net worth in 2020 was far less at around $6 million—which means that his net worth has almost doubled after filming his role in Dune in 2019. Of course, aside from Dune, the majority of Chalamet’s net worth is still thanks to his other leading roles in aforementioned films like Call Me By Your Name, The King, Little Women and the forthcoming Wonka, among others.

Dune is available to stream on HBO Max.