If you’re anything like us, you’ve been in desperate need of Tiger King season 2 since the Netflix docuseries took the world by storm in 2020. Well, you’re in luck, because Tiger King season 2 is on the way and it’ll be “just as dramatic” as the first season (or even more.) Here’s what we know about it.

What Was Tiger King Season 1 About?

Tiger King season 1 seven-episode docuseries that premiered on Netflix on March 20, 2021. The series followed the rise and fall of Joe Exotic, the self-proclaimed Tiger King and the owner of Oklahoma’s Greater Wynnewood Exotic Animal Park. Much of the series followed the feud between Joe and Carole Baskin, the CEO of Florida’s Big Cat Rescue. Joe and Carole disagreed about his treatment of big cats. While Carole believed that Joe’s zoo conditions, breeding programs and attractions, where he charged visitors to pet lion and tiger cubs, were abuse and violations of animal rights, Joe didn’t think the same. Long story short, the feud became dark, and Joe was sentenced to 22 years in prison for plotting Carole’s murder (among other charges) on January 22, 2020.

Will There Be a Tiger King Season 2?

As you can tell, the case is wild, and there should be more than enough material for a Tiger King season 2. Netflix confirmed that Tiger King season 2 was in the works in September 2021. In an interview with Entertainment Weekly in March 2020, Rebecca Chaiklin, one of the series’ producers, confirmed that the creators would love a “follow-up” on all the drama in season 1. “There could be a follow-up on this story because there’s a lot that’s still unfolding in it, and it’ll be just as dramatic and just as colorful as what has unfolded these past few years,” she said. 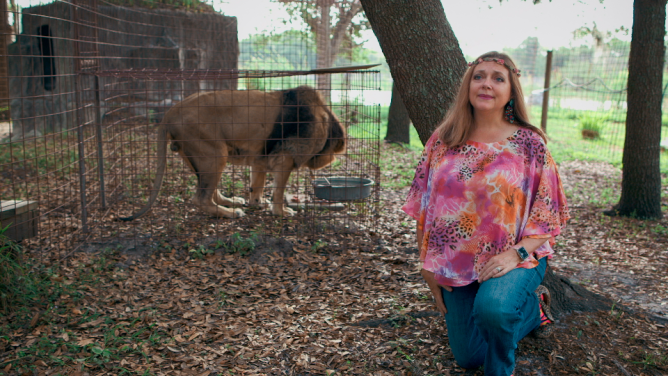 What Will Tiger King Season 2 Be About?

As for what Tiger King season 2 could be about, well there are two storylines so far. The first is Joe’s $94 million lawsuit with the United States Federal government. After the docuseries premiered, TMZ reported that Joe filed a multi-million-dollar lawsuit against the U.S. Fish and Wildlife Service and and the U.S. Department of Interior on the basis that he was falsely imprisoned. One of the crimes he was convicted for was the deaths of five of his tigers, who were buried at the back of his park. Because tigers are considered an endangered species, the government claimed that Joe violated the Endangered Species Act.

However, according to TMZ, Joe rebuts in lawsuit that the federal government incorrectly listed the “generic tiger” as an endangered species. Further, Joe also claimed that he was “discriminated against because he is the only person charged with this statute because [he] is an openly gay male with the largest collection of generic tigers and crossbreeds.” TMZ also reports that he accused two of his former colleagues, including his ex-business partner Jeff Lowe, of lying to federal agents and planting evidence against him. He is also seeking a presidential pardon from President Donald Trump.

There’s also a storyline involving Carole that can be explored. Since Tiger King, viewers have petitioned for the Federal Bureau of Investigation to reopen the cold case involving Carole’s missing husband, Don Lewis, who disappeared in August 1997. The series also led a sheriff in Florida to ask for any new leads on the case.

In October 2021, Netflix released the trailer for Tiger King season 2, which saw footage of Joe Exotic on a call from jail, as well as interviews with Carole Baskin and Jeff Lowe. From the looks of the trailer, season 2 will revolve around Joe Exotic’s feud with Jeff Lowe, who became the new owner of Joe’s zoo after his arrest. The trailer also dug deeper into the disappearance of Carole’s ex-husband, Don Lewis, who disappeared in 1997, as well as introduced new characters to the Tiger King story.

When is Tiger King season 2 coming out?

Netflix hasn’t announced the exact release date for Tiger King season 2, but the service did confirm in a tweet in September 2021 that the follow-up will air by the end of 2021. “Tiger King is coming back this year — and Season 2 promises just as much mayhem and madness as Season 1!” Netflix tweeted, alongside a screenshot of Exotic on the phone from jail. On the screenshot was the text, “A Netflix documentary series: Tiger King 2”

The Tiger King season 2 trailer sees the return of Joe Exotic, Jeff Lowe, Lauren Lowe, Carole Baskin and other characters from season 1. However, according to Entertainment Weekly, co-producers Eric Goode and Rebecca Chaike will return to oversee the series.

Are There Any Other Tiger King Shows?

Along with Tiger King season 2, there’s an upcoming limited series about Carole, where Kate McKinnon will play the controversial sanctuary owner.

A version of this story was originally published in March 2020.