Inject this content into our veins. A new Tiger King episode is coming to Netflix on Sunday, April 12 and it will explain what happened to Joe Exotic’s business-partner-turned-arch-nemesis Jeff Lowe. Since the release of Netflix’s Tiger King: Murder, Mayhem and Madness, a true crime documentary about privately owned exotic cats in the United States, several characters from the docuseries have become household names. Among them is Jeff Lowe, Joe Exotic’s former business partner who bought his zoo and turned him in for murder-for-hire.

In a recent Cameo, a site where fans can buy video messages from “celebrities,” Jeff and his wife, Lauren Lowe, revealed that there will be at least one more Tiger King episode to come to Netflix and that episode will come sooner than we think. “Netflix is adding one more episode, will be on next week. We’re filming here tomorrow,” he said.

Netflix announced that the new episode will be an aftershow hosted Joel McHale, who will interview characters including John Reinke, Joshua Dial, John Finlay, Saff, Erik Cowie, Rick Kirkman, and Jeff and Lauren Lowe. The episode, titled The Tiger King and I, will be released on Sunday, April 12

As viewers remember, Jeff took ownership of Joe’s Greater Wynnewood Exotic Animal Park in Oklahoma after he was sentenced to 22 years in federal prison for his alleged plot to murder Carole Baskin, his rival and the owner of the Big Cat Rescue in Florida, and the alleged abuse of many animals at his park. (Among Joe’s charges is that he illegally sold tiger cubs, some as young as two weeks old, and killed five of his tigers and buried them in the back of his park to make room for younger big cats.) 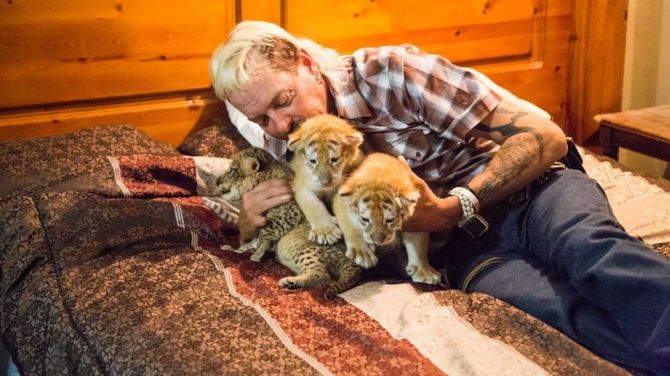 While it hasn’t been confirmed yet, Tiger King’s show runner Rebecca Chaiklin told Entertainment Weekly that a Tiger King season 2 isn’t out of the realm of possibility. “I mean, yes, we have a crazy amount of footage and it’s a story that’s still unfolding,” she said. “We’re not sure yet, but there could be a follow-up on this story because there’s a lot that’s still unfolding in it, and it’ll be just as dramatic and just as colorful as what has unfolded these past few years”

Give them the green light, Netflix. Because Tiger King season 2 is all we need during these weird times.