Awards season is my favorite season, even if it all looks a little different in 2021. Yes, this year’s Golden Globes were pretty virtual-attendee-heavy, but that doesn’t mean they weren’t also great! Before I had the chance get too bummed-out about yet another virtual ceremony, Tiffany Haddish’s 2021 Golden Globes look brightened up my whole evening with a little glitz and glimmer. Leave it to one of the funniest women in Hollywood to remind me that, at the end of the day, fashion is supposed to be fun!

Remember back when Tiffany Haddish would wear the same white gown over and over again? She wore it to four different appearances, proving that you can always find an occasion to over-dress. Her $4,000 Alexander McQueen frock cemented Haddish as a total fashion icon in my eyes, so I don’t want to hear anyone coming for me about wearing the same pair of sweatpants more than one day in a row, okay? Glad we could clear that up.

Back to the Globes fashion: Haddish joined other presenters like Kristen Wiig, Awkwafina and Cynthia Erivo to present the Globes IRL while the nominees themselves stayed safe at home. Haddish, who was styled by none other than Law Roach, rocked a blingy look by Alberta Ferretti. It kind of gave me soda can tab realness, but in the best way. I loved the notched neckline and body-hugging silhouette! The dress itself had a bodysuit underneath but was mostly see-through, so Haddish’s long legs were especially on display. Ooh la la! 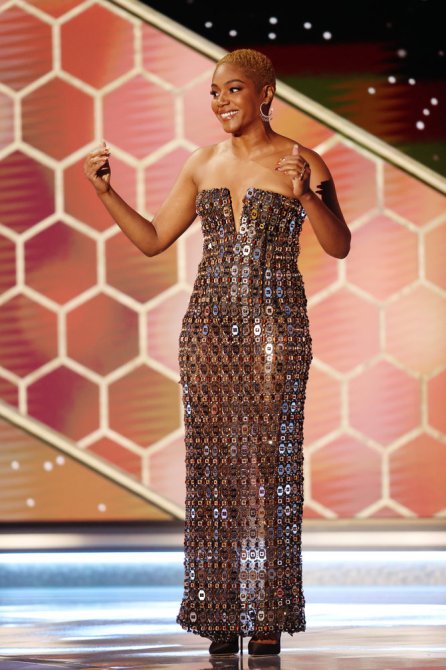 Haddish accessorized her bold gown with simple black pumps and some detailed silver hoops, and her super-short hair—she shaved her head back in June, ICYMI—was bleached blonde, a new look I absolutely adored. TBH, it was proof she really can pull off anything. We stan a versatile beauty queen! And of course, her glam was on point with skin glowing for the gods.

All in all, I’m glad Haddish was one of the celebs who got to make an IRL appearance this year. Remember when the red carpet fashion actually took place on, you know, a real-life red carpet? I miss those days. Still, it seems our fave celeb stylists aren’t slowing down despite the lack of opportunities to dress their clients. Law Roach really snapped with this look; he must’ve been saving it for just the right night for Haddish to slay! 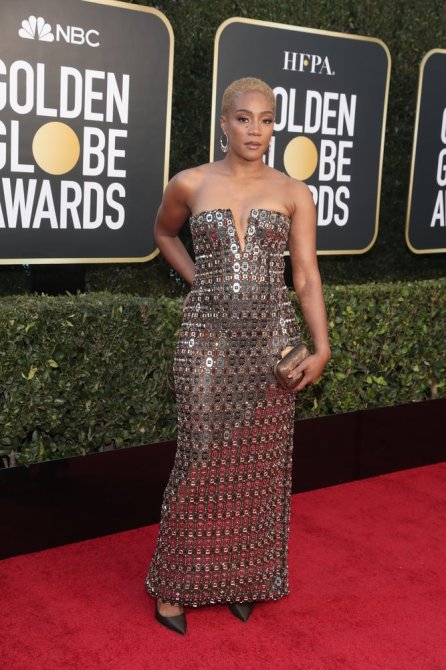 While we’re all sat at home due to some (very necessary!) pandemic precautions, let us be thankful for the killer looks we’re able to experience during this very strange awards season. Haddish might not have any Golden Globes of her own at home, but this look is a real winner in my book. TBH, I wouldn’t be mad if this becomes the second look she wears over and over again. It’s that good!