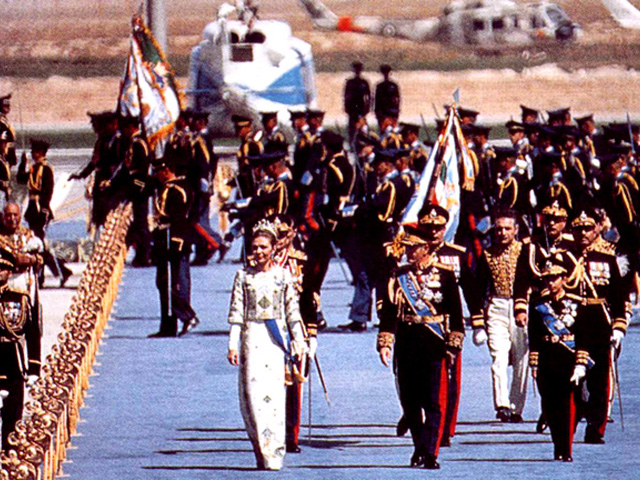 There is no better way to make a political statement than with a multi-million dollar party, right? Well, that’s exactly what the late Shah of Iran thought in 1971 when he celebrated the 2,500th anniversary of the founding of the Persian Empire. To make it known that Iran is a nation equal to others, the Shah threw the be-all-end-all Arabian nights party where Persian carpets, jewels, champagne, and royalty kings filled the scene. The budget had no limit, refreshments were flowing, and every detail was thought of and taken care of.
From the guest list to the entertainment, we’ve got the details so you’ll be prepared in case you ever decide to try to one-up this historic party.
Venue: Three enormous tents (more like mini-cities) and 59 smaller tents comprised the Shah’s “tent city” in Persepolis where the big bash took place. Keep in mind, guests of the party weren’t roughing it by any means. The interior design firm The House of Jansen, who helped Jackie Kennedy design the White House, made sure these tents were air-conditioned and they featured Baccarat crystal, Limoges china, Porthault linens, and intercoms.
Guest List: Perhaps one of the more eclectic guest lists in history, at this party it wouldn’t be a shock if to your right was a sultan and to your left was a president. Among the 500 lavish guests, Emperor Haile Selassie of Ethiopia, Princess Grace and Prince Rainier of Monaco, and Vice-President Spiro Agnew were among them. In total there were nine kings, five queens, sixteen presidents, and two sultans.
The Food: The Shah spared no dollar—or should we say Iranian rial—when it came to feeding his guests. 25,000 bottles of wine, 7,700 pounds of meat, 8,000 pounds of butter and cheese, and 1,000 pints of cream kept the 500-person guest list well-fed and buzzing. To ensure that he had the best of the best, the Shah flew in 165 chefs from Maxim’s of Paris who served up quail eggs and caviar, partridge with foie gras and truffle stuffing, and filet of sole stuffed with caviar.
Extra Amenities: Based on the fabulous roster, we’re certain most of partygoers arrived already quite well groomed, but in case anyone’s hair was out of place French hairdressers were made available and came with 300 wigs and 240 pounds of hairpins.
Fun Fact: Emperor Haile Selassie, who originally RSVP’d for himself and five others, arrived with seventy-two guests. Talk about rolling deep.
Cost: If you’re looking to replicate the Shah’s extravagant Arabian nights party, be sure you have a wide open desert at your disposal and some serious money on hand. The 2,500th Anniversary of the Peacock Throne is speculated to be the most expensive party in history. The Shah of Iran spent $90 million on the bash in 1971, which today is equal to over $516 million.