David Benioff and Dan Weiss have a chance to redeem themselves with The Three-Body Problem on Netflix. The series, which is being adapted from author Liu Cixin’s critically acclaimed sci-fi novel trilogy, was reportedly greenlit as part of the former Game of Thrones showrunners’ $200 million deal with the streaming giant. Benioff and Weiss signed the partnership last year, agreeing to create new television series and films exclusively at Netflix for the foreseeable future. This project marks their first under the new agreement.

As for what viewers can expect from the forthcoming series, the Game of Thrones execs promise one of the “most ambitious” storylines audiences have ever experienced. The show will cover each of Liu’s novels in the trilogy—The Three-Body Problem, The Dark Forest, and Death’s End—which tell the story of humankind’s first contact with an alien civilization, beginning in the age of  China’s Cultural Revolution. “Liu Cixin’s trilogy is the most ambitious science-fiction series we’ve read, taking readers on a journey from the 1960s until the end of time, from life on our pale blue dot to the distant fringes of the universe,” Benioff and Weiss said in a statement. “We look forward to spending the next years of our lives bringing this to life for audiences around the world.”

And the Game of Thrones alums won’t be the only ones involved with bringing Liu’s story to life. The dynamic duo has paired up with writer and producer Alexander Woo, who told Variety it’s “a privilege to be adapting one of the great masterpieces of Chinese science-fiction.” Liu’s novels have been translated into over 20 languages and sold at least 8 million copies worldwide since the first book in the series was published in 2008. According to Woo, “The Three-Body Problem trilogy combines so many things I love: rich, multi-layered characters and true existential stakes – all told as an elegant and deeply human allegory.” 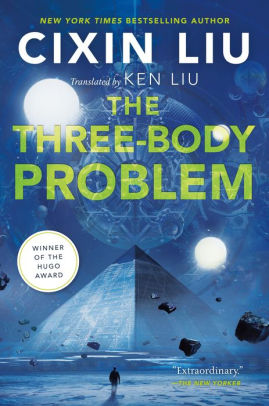 In addition to the powerhouse production trio, the likes of Brad Pitt, Rosamund Pike, and Rian Johnson have all signed on as executive producers, along with author Liu himself as a consulting producer. Liu revealed in a statement that he is “excited for new and existing fans all over the world to discover the story,” whereas Netflix is reportedly adamant about paying “homage” to the author and his work.

“David Benioff, D.B. Weiss, and Alexander Woo have experience tackling ambitious sagas over time and space,” said Netflix’s vice president for original series, Peter Friedlander. “Rian Johnson and Ram Bergman have long dazzled fans with thrilling and mind-bending epics. They are all fierce advocates of The Three-Body Problem. As ardent fans, it was especially meaningful to us to get the support of Liu Cixin who created this expansive universe. We all share the same goal: to pay homage to this incredible story and take members on the adventure of a lifetime.”

Netflix wasn’t the only streaming giant interested in purchasing the rights to adapt the acclaimed series. According to Forbes, Amazon Studios reportedly considered paying $1 billion for the series in 2018—so you can only imagine the payment Netflix settled on. Let’s hope the investment lives up to the value of Liu’s work. In the meantime, get your hands on copies for the trilogy; after all, with no release date in sight, readers unfamiliar with the series have plenty of time to catch up.