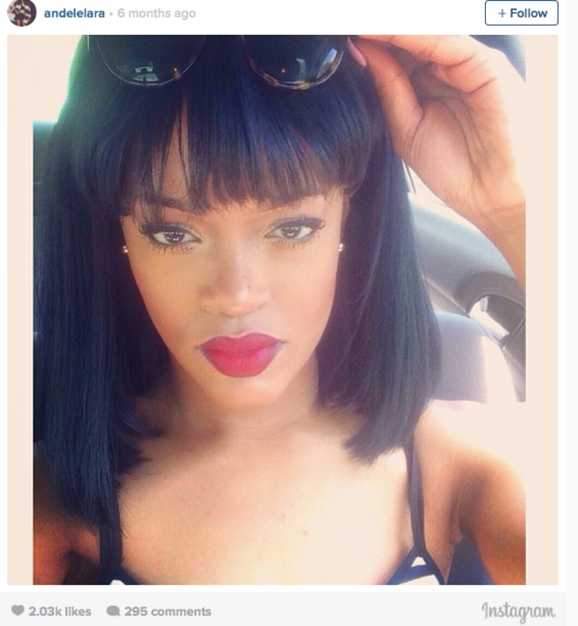 Andele Lara is just your average Boston college student, except for one minor thing: She’s the spitting image of Rihanna.

“Literally, people mistake me for her all the time! I only have to step out of the house for an hour before I hear someone say, ‘Oh my god, is that Rihanna?'” the 22-year-old told The Daily Mail, adding:

“At first, I thought it was funny to take a picture with someone who believed I was her and then make their day. But as Rihanna gets even more famous, the attention just intensifies. Some people follow me into stores or as I’m driving. Other times fifteen people will swarm at me all at once to take a picture with me. I do think the attention I get is cool but there have been some scary occasions when some super-fans have followed me on my way to work everyday. And I must admit there have also been moments when I couldn’t face taking a photo with yet another Rihanna fan. But it really makes their day to think they met Ri-Ri. I’ve never denied anyone a picture.”

While it might sound like a big pain to look like the biggest pop star on earth, Lara has turned her Rihanna-like face into cold hard cash, landing over $20,000 worth of contracts in the last year to promote things on Instagram, she told The Daily Mail.

She said: “I wouldn’t really say I’ve gone out looking for opportunities, they’ve just come along naturally. I reckon if I put more effort, I would get even more! I’ve scored hair contracts as well as sneaker, mascara, hair accessories and apparel deals. I also get into clubs for free and I get a lot of free drinks too!”

Hey, if you can’t actually be Rihanna, it apparently pays quite well to look like her.