This Is Us, which premiered in 2016, follows the Pearson family (which includes siblings Randall, Kate and Kevin Pearson and parents Jack and Rebecca Pearson) through different times of their lives. The show, which stars Sterling K. Brown (Randall), Chrissy Metz (Kate), Justin Hartley (Kevin), Milo Ventimiglia (Jack) and Mandy Moore (Rebecca), aired its season 4 finale in March 2020. The episode left fans with several cliffhangers: Madison, Kate’s friend, revealed that she’s pregnant with Kevin’s baby; Randall and Kevin end their relationship after Randall revealed that he convinced their mom, Rebecca, to do a clinical trial for her Alzheimer’s; Kate and her husband, Toby, consider having another baby. In the future, we also learn that Kate and Toby’s son Jack (who’s now an adult) has a sister named Hailey, as well as a daughter named Hope with his wife, Lucy.

Suffice to say, there are a lot of questions that This Is Us has to offer this season. If you can’t wait like us, read these This Is Us season 5 spoilers, theories and clues about what will happen to the Pearsons and the Big Three. (Click here to read about This Is Us‘ premiere date and other news.)

Kate Will Have a Big Storyline With Her Dad

In This Is Us season 2, the show revealed that Jack died after he returned to the Pearsons’ burning house to save Kate’s dog. Though he escapes the fire, Jack later dies from the smoke in his lungs. In the future, viewers see Kate struggle with the belief that she killed her father. In June 2020, Metz told StyleCaster that the writers of the show called her to tell her about an “important” storyline with Kate and her dad for season 5.

“There is a storyline that’s coming up next season, Dan and the writers called me and was like, ‘Are you going to be comfortable with this?’ And I was like, ‘Uh. Yes? It’s a very important topic to bring up and to discuss.’ We get to delve deeper into where Kate’s issues really stem from aside from the shame and the guilt that she’s had about her father’s death,” Metz said at the time.

This Is Us Will End After Season 6

Metz confirmed to StyleCaster in June that This Is Us will end after season 6, so fans should expect the show to answer a lot of questions to set up the series finale in season 5. “We know how it ends. So far, we’re going until season 6, but I think everyone is hopeful that there might be another season or a spinoff,” Metz said at the time. “I mean, we’re not talking Game of Thrones budget, but this show and the storylines are very intricate, and you want there to consistently be quality. We’ve known sort of from the get go. They’ve always had the timeline of how things were going to unfold. Tings do change because of whether an actor can’t be in the show anymore or they’re pregnant. But we’ve known for mostly the last four years.” 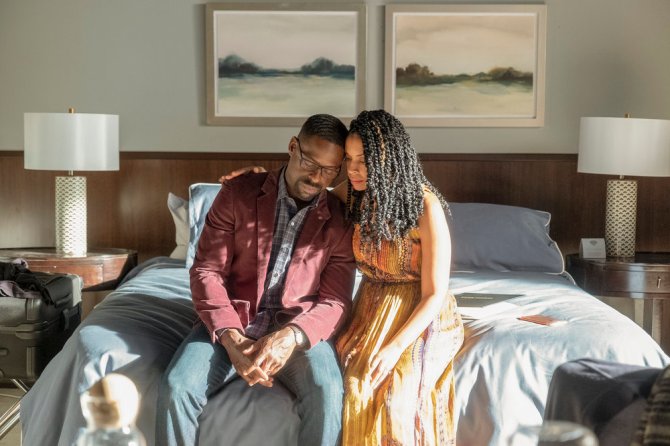 Fans have been rooting for Kevin and Sophie (Kevin’s childhood friend whom he married and later divorced) since season 1. Season 4 almost saw the two reunite until Madison told Kevin that she’s pregnant with his child. In a June 2020 interview with StyleCaster, Metz hinted that Madison will be a roadblock for Kevin and Sophie, but that doesn’t mean the two are over. Metz also teased that Kevin’s tryst with Madison will cause tension in his relationship with Kate, who is best friends with Madison.

“I think that Kate was in shock. ‘What the hell? This is the only friend I have, and this is what you do?’ But I think Kate is going to know what’s good for Kevin,” Metz said at the time. “I think it’s interesting because if Kevin really got together with Sophie and they have this big, incredible amazing life together, you’re like, ‘Really? That’s too perfect.’ It doesn’t really work out that way. I found it interesting that the writers decided that it would be Madison. I’m excited to see where it goes. Not only for Justin, but for Cait Thompson, the actress, and for Kate, the character.”

There Will Be Less Kissing

Due to the current health crisis, TV and movie productions have had to find new ways to deal with kissing and sex scenes—This Is Us included. In a September 2020 interview with Entertainment Tonight, Metz confirmed that there will be less kissing scenes in This Is Us season 5 because of this.

Coronavirus Will Be a Storyline

Creator Dan Fogelman confirmed on Twitter in August 2020 that coronavirus will be a storyline on season 5. “Yes on Covid,” he wrote. “We’ve decided to attack things head on. Very proud of @ThisIsUsWriters.”

“How that needle was thread and how it was addressed, I thought the writers came up with something really wonderful — as they always do — to discuss a topic that’s current,” Ventimiglia told Us Weekly in October 2020 of how the show addressed cornavirus. “It’s burning and it’s in all of our yards, so even though I wasn’t around for the filming of the first two episodes, what they had written was absolutely right in the way they were approaching it from so many different angles. They aren’t ripping it apart for discovery, but just trying to have a deeper understanding of what we’re going through.”

He continued, “The one thing that I’ve always appreciated with the show — we’re not trying to tell people how to live their lives, we’re just trying to show the life of these folks and hopefully, you can relate to it.”

Miguel May Have Died

In an interview with Us Weekly in October 2020, Ventimiglia hinted that Miguel may be dead in the future when Rebecca has Alzheimer’s, which is why he isn’t seen next to her hospital bed. Instead, to her is Jack’s brother Nicky, who’s wearing a wedding ring. When Ventimiglia was asked about the theory that Jack’s brother may have remarried with Rebecca, he hinted at Miguel’s fate in the future.

“I mean, that’s pretty cool. Speaking as Jack, it breaks my heart that Miguel is not around because that’s his best friend,” he said. “But maybe that means that maybe Jack and Miguel are just kind of hanging out in heaven together. I don’t know!”

There Will Be A Lot of Pregnant Rebecca Scenes

Ventimiglia confirmed in October that Moore’s pregnancy with her husband, Taylor Goldsmith, will play a part in This Is Us season 5. He told Us Weekly at the time that the cast is expecting to film more scenes of Rebecca when she was pregnant with her triplets. “I’m sure as she’s evolving in her birth, as her belly is growing, then we’ll probably be playing some of those notes up to the Big Three’s birth,” Ventimiglia said at the time. “As far as I understand it, Mandy’s not really showing right now, but I think … it’s gonna creep up on all of us!”