As usual, This Is Us has us shool. This Is Us Season 4 Kate and Mark theory is throwing fans for quite a loop. The hit NBC drama loves flashing forwards and backward in time to show small glimpses of what has, and what will happen to our favorite characters. Well, in the latest flashback, we met Kate’s teenage boyfriend, Mark. Now friends are wondering what happened to Kate’s old boyfriend. And also—why are we only just hearing about Mark now? Let’s dive in. FYI: Season 4 This Is Us spoilers are ahead.

In Episode 4 of This Is Us,  viewers watched an adorable first encounter between Kate and her teenage boyfriend, Mark. They meet at a record store, where Mark is a the manager. And after just a brief exchange, Mark has hired Kate as an employee. Fans were hardly surprised by what they saw next—Kate and Mark going at it in the storeroom. Given the couple’s immediate attraction, a storeroom make-out wasn’t far away.

Then, Mark suddenly makes an uninvited appearance at the Pearson family dinner, telling Kate he didn’t want her to feel like a fifth wheel. He knew Kevin and Randall would both have dates, so he looked up her address on her job application and made his way to the house. Of course, he first stopped for daisies, because he knew not to arrive empty handed. He then introduces himself as Kate’s boyfriend. So all sweet and good, right? Well…maybe not. Back in the present-day, Kate discovers some polaroids from that very night, hidden in the family’s piano bench. Rebecca seems slightly discouraged, glancing at the photos with a sigh. She seems sad as she says she was so hopeful everyone was happy and moving on after Jack’s passing, but she was wrong. So what is Rebecca referencing? 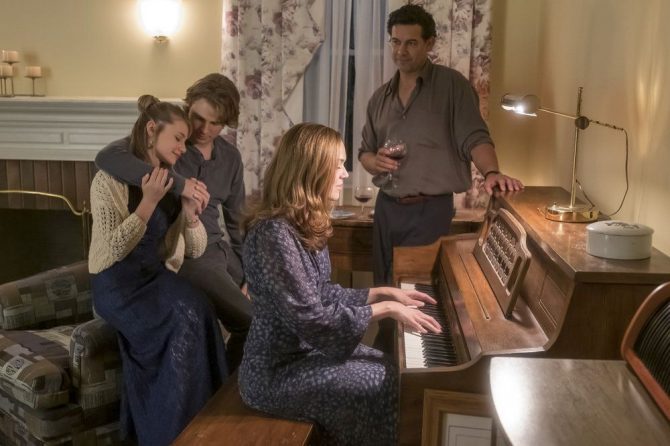 Well, if we look at the scene we saw in the flashback more closely, Mark’s actions don’t entirely seem to come from a cute place. It felt like a grand gesture at the time, but recounting it above made it sound very creepy. And that’s exactly how it feels—it was inappropriate. Kate’s boss used his privileged access to her personal information. He then shows up—uninvited—to her home, first stopping to steal flowers from her neighbors’s yard. Kate introduces Mark as “a friend from work,” but Mark blatantly ignores her lead, telling everyone he is her boyfriend.

But Kevin failed to make Kate see the truth. He tried to frame it under “he’s too old”—because Mark is in his 20s and Kate is just 18. But the reality of what he’s trying to say is that Mark’s actions are rooted in a blatant disregard for Kate’s needs and wants. He crosses boundaries, hers included, on multiple occasions. So his “grand gesture” wasn’t rooted in bringing her happiness, it was rooted in his own wants and needs.