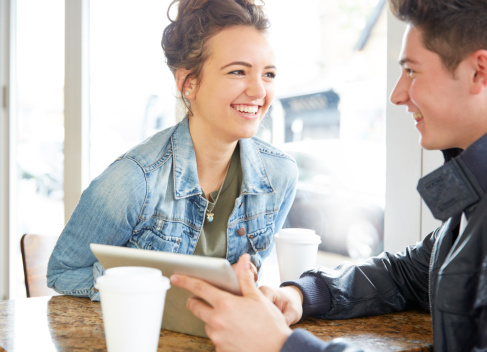 By and large, we don’t really believe the tired phrase that men are from Mars and women from Venus, preferring a more progressive standpoint that men and women really aren’t that different at the end of the day. (And there’s plenty of ongoing research to back this up.) But sometimes, we just can’t deny the psychological gap that exists between gentlemen and those of the fairer sex.

MORE: Does It Matter What You Order On a Date? Here’s What Men Really Think

This is especially true when it comes to daily interactions on topics including clothing, dinner, and anything that requires doing more than one task at a time. In no way are we apologizing for our behaviors below, just simply observing them. In fact, if you read closely enough, you may detect a hint of praise for the way we ladies often conduct ourselves.

MORE: Relationship 101: When To Meet the Parents, When to Take a Trip, More

Read on! And if you happen to be male, you might want to take notes.

1. Say we’re “fine,” when we’re really not fine.
If you haven’t done this, you have yet to graduate to womanhood. Nothing’s more frustrating that being angered by a man only to have him not understand why you are upset with him. Your only adequate recourse: say you’re “fine,” and expect him to figure it out on his own. Obviously.

Why do we do this? In some cases, it’s because right after an argument, we haven’t gotten our thoughts together to adequately explain why we’re unhappy; in other cases it’s because we’re not feeling assertive enough in the moment to explain what’s bothering us. Often enough, however, it results from just wanting the dude to know what’s up without us having to spell everything out for him which, we realize, isn’t always the best strategy.

2. Wear our highest heels on a date, then complain all night about how badly our feet hurt.
Dear all men everywhere: here’s why we do this. We wear the shoes because they look beautiful; we complain because they hurt. These two behaviors are not mutually exclusive. We hate to be the ones to break it to you, but this will probably never change.

If we wear our highest high heels on a date to the beach, the gym, on a bike ride, or to a football game in November, then you’re allowed to complain.

3. Ask if we look good in a new dress, then get upset when the response is anything but “absolutely, you look amazing.”
This is something women do despite themselves. We aren’t stupid; we know going into it that this isn’t the greatest idea. And it’s illogical to boot: there is only one acceptable response (at least, if we’re dealing with a man who knows where his bread is buttered). And yet, we ask anyway. Why?

Probably because, like any human being, we enjoy being told we look good—which at the root stems from the desire to feel good. And despite the fact that we know we don’t need to ask for such approval, we still care what you think when it comes to certain items, like a pretty new dress we bought to wear to a big event with you.

5. Deny ordering dessert for ourselves, but nibble on other people’s.
This is a psychological thing that also applies to other foods perceived as unhealthy, fatty, or otherwise indulgent. If we order it for ourselves, that means we’re given in to our temptation to eat something that, for whatever flawed reason, we think we shouldn’t. If we just have a couple bites of yours, we’ve committed to nothing and those calories feel like they don’t count. Silly, right?

6. Claim we have no expectations, then get upset when we don’t get what we want.
We want to believe we’re able to go with the flow and take things as they come, so we say things like, “It’s okay, we’ll go to dinner wherever you want!” or “I don’t care, what do you want to do?” but then get irked when things don’t go our way. This is probably because we want to avoid the idea that we might be “high-maintenance” at any cost, which is silly now that we think about it because a simple “I’d rather eat pizza than sushi tonight” goes a long way.

7. Know how to multi-task like a true pro.
On the more practical side of things, men will never understand our ability to multi-task. While, for many of them, eating popcorn and watching a movie at the same time is about as far as they get, it’s not uncommon for us to be able to juggle four to five tasks at the same time. And we aren’t just saying this—science can, and has, proved it.