We never thought this day would come, but it has indeed arrived: under industry pressure to be as thin as humanly possible, some models have reached such scarily skinny frames that editors are actually photoshopping them to look plumper. The research comes courtesy of Leah Hardy, a former editor at Cosmopolitan, who told the Daily Mail that she often saw models “reverse retouched” to make them look healthier.

MORE: What Classic Works of Art Would Look Like Photoshopped

“At the time, when we pored over the raw images, creating the appearance of smooth flesh over protruding ribs, softening the look of collarbones that stuck out like coat hangers, adding curves to flat bottoms and cleavage to pigeon chests, we felt we were doing the right thing,” Hardy reveals. “But now, I wonder. Because for all our retouching, it was still clear to the reader that these women were very, very thin.”

And she’s not the only one. An editor at British Vogue also revealed, “I spent the first ten years of my career making girls look thinner, and the last ten making them look larger.”

MORE: Here’s a GIF of a Model Turning Into a Completely Different Person

Karlie Kloss is among the models who has been digitally plumped. For a spread in the October 2012 issue of Número magazine, the gorgeous 21-year-old had her jutting ribs and collarbone smoothed over to look less skeletal. Check it out: 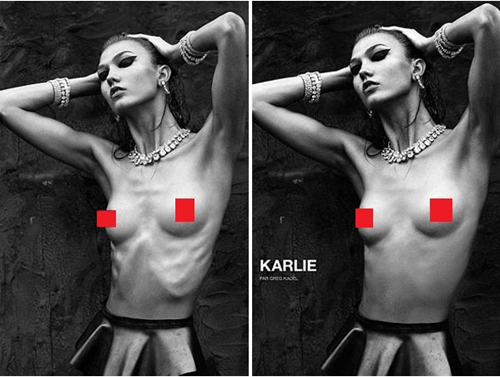 Photo: Courtesy of The Society Pages

While we never want to participate in body shaming of any kind—some women are just naturally thin, and we get that—we’d wager that many of these models aren’t naturally this thin. It’s their profession to fit into the mold of beauty the fashion industry (and society, really) has deemed acceptable.

What do you think about models getting Photoshopped to look larger? Sound off below.