Like his fashion designs, Thierry Mugler‘s face was also used as a form of art. Mugler, the founder of the French fashion house Mugler, had underwent several facial reconstructive surgeries in his life before his death in 2022.

Mugler launched his eponymous fashion house in the 1970s and became known for his dramatic, avant-grade designs. He retired from the brand in 2002 but returned in 2013 as its creative adviser. Throughout his career, Mugler has designed for dozens of celebrities including Lady Gaga, Cardi B, Beyonce and Kim Kardashian, who paid tribute to the late designer in an Instagram post on January 24, 2022.

“Manfred Thierry Mugler 💔 My heart breaks. There’s no one like you! Your vision, your transformations, your magic! I am so honored to have known you, spent time with you and be a muse for you,” she captioned the post, which included a slideshow of photos of her and Mugler. “There was so much more for you to show the world and that we had planned to do together, but you already gave us so much. I will never forget our time together around the world and learning from the master himself on what couture really meant!” She continued, “You always said beauty will save the world – and you really believed it was a better place because of the beauty all around! Thank you for the beauty. I love you so much. My condolences go to Manfred’s family, friends, JB and his incredible team – and everyone who loved him and who’s lives he has touched.”

Iman, who’s modeled several time for Mugler’s brand, also paid tribute to the late designer in an Instagram post. “In my career I can honestly say I’ve had two collaborators who’ve changed the trajectory of not only my career but my life….Peter Beard and Thierry Mugler!” she captioned the post, which included a series of videos on the runway for Mugler. “Mr. Mugler was not only a designer who believed in me but also in my womankind…. the black model! He was not only an ally for me in front of the crowd but also behind my back & ours—— A true friend! Let’s remember our heroes and allies not only when they die, but let’s honor them and shout out their names when they’re alive! I will forever be in your gratitude. #RIP #ManfredThierryMugler.” 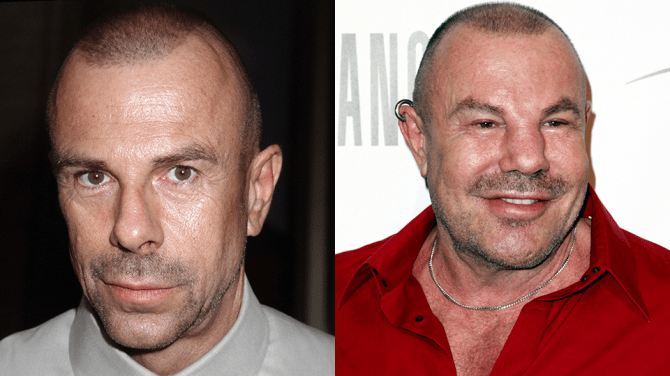 What happened to Thierry Mugler’s face?

What happened to Thierry Mugler‘s face? Mugler told Interview magazine in 2019 that he’s undergone several facial reconstructive surgeries after he suffered various accidents in his life. The first major accident was when he crashed his jeep, which left his nose “completely destroyed.” When he suffered a second accident—this time, with a motorcycle and steel cables—Mugler asked the surgeon if he could make the procedure more “fun” by adding a piece of bone from his hip to his chin and altering his face so he could look more like a “warrior.”

“[Transforming my facial features] was all about fun and pleasing myself. And opportunities. I had several accidents. One was crashing in a jeep, during which my nose was completely destroyed,” Mugler told actress Tippi Hendren at the time. “Another motorcycle accident involved steel cables, after which I had to remove a piece of metal from my leg. There was all this anesthesia and stuff, and I could never motivate myself to go back to the hospital becauseI’m so busy, and the surgeon was screaming at me, because they had to take this piece of metal out of my leg.”

He continued, “So I said, ‘Let’s find a way to make this fun!’ I asked another surgeon if he could do some things to my chin, and then I was happy to get the bloody anesthesia. He actually took a piece of bone from my hip and put it on my chin, so I don’t have any plastic or silicone. It’s all bones. I wanted my face to represent progress, because after years of being a thin, charming dancer, I wanted to be a warrior. I’ve done so much in my life. I’ve fought so much. I’m a superhero, so it’s normal to have the face of one.” Mugler also explained that he wanted his facial reconstructive surgery to be as natural as possible, which is why he wanted to use bones to reconstruct his face instead of silicone or plastic. “I don’t know what normal even means. I think nature is endless and beautiful, so I try to occupy nature and never contradict it. Silicone, these cheap things, are ugly,” he said.

He also told Hendren about how his background in classical dance taught him how his body has “no limits” to what it can do. “It showed me that there are no limits. When you do intense stretching the way I do, it’s sort of a meditation,” he said. “And as time progresses, you realize it’s infinite. You die before you reach the end of your perfect technique, and then we become something else, so it is truly infinite.” He continued, “You know, your body has a memory and it’s connected to your spirit. If you want to use it, you have to get rid of the past.It’s just like emptying your drawers to put new stuff in them.”