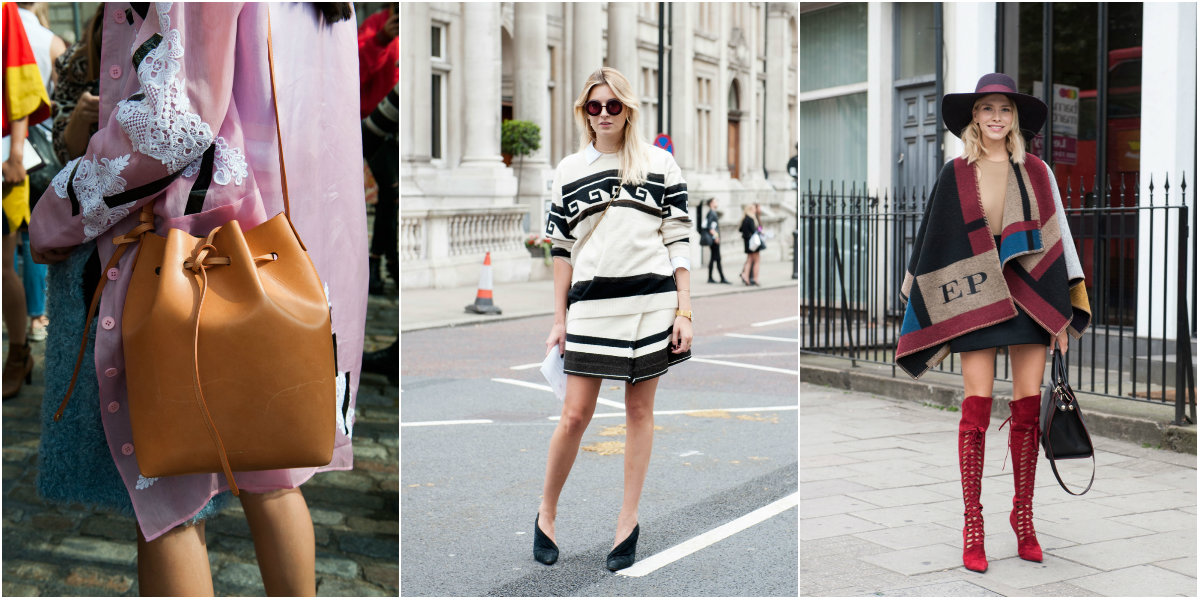 As 2014 draws to a close, we’re officially bidding the year farewell with a look at individual items and trends that made a splash in the fashion world this year with editors, It-girls, street style stars, and bloggers.

MORE: How Brands are Capitalizing on Normcore

It should be noted that overall, the influence of the “It” item phenomenon was felt less strongly this year as it was in 2012 and 2013—years that saw pieces like Isabel Marant wedge sneakers, Céline Luggage Totes, that Kenzo tiger sweatshirt, Valentino rockstud pumps—likely because most of the fashion crowd jumped aboard the Normcore movement and decided to eschew flashy items in favor of nondescript basics like baggy jeans, plain tees, and sneakers.

That said, a few very specific items were at the forefront of street style—the beautifully simple Mansur Gavriel bucket bag, a singular plaid coat from Zara, Adidas’ Stan Smith sneakers—and they all had a few factors in common:  Cool people wore ‘em, they were photographed to death, and we all wanted ‘em. 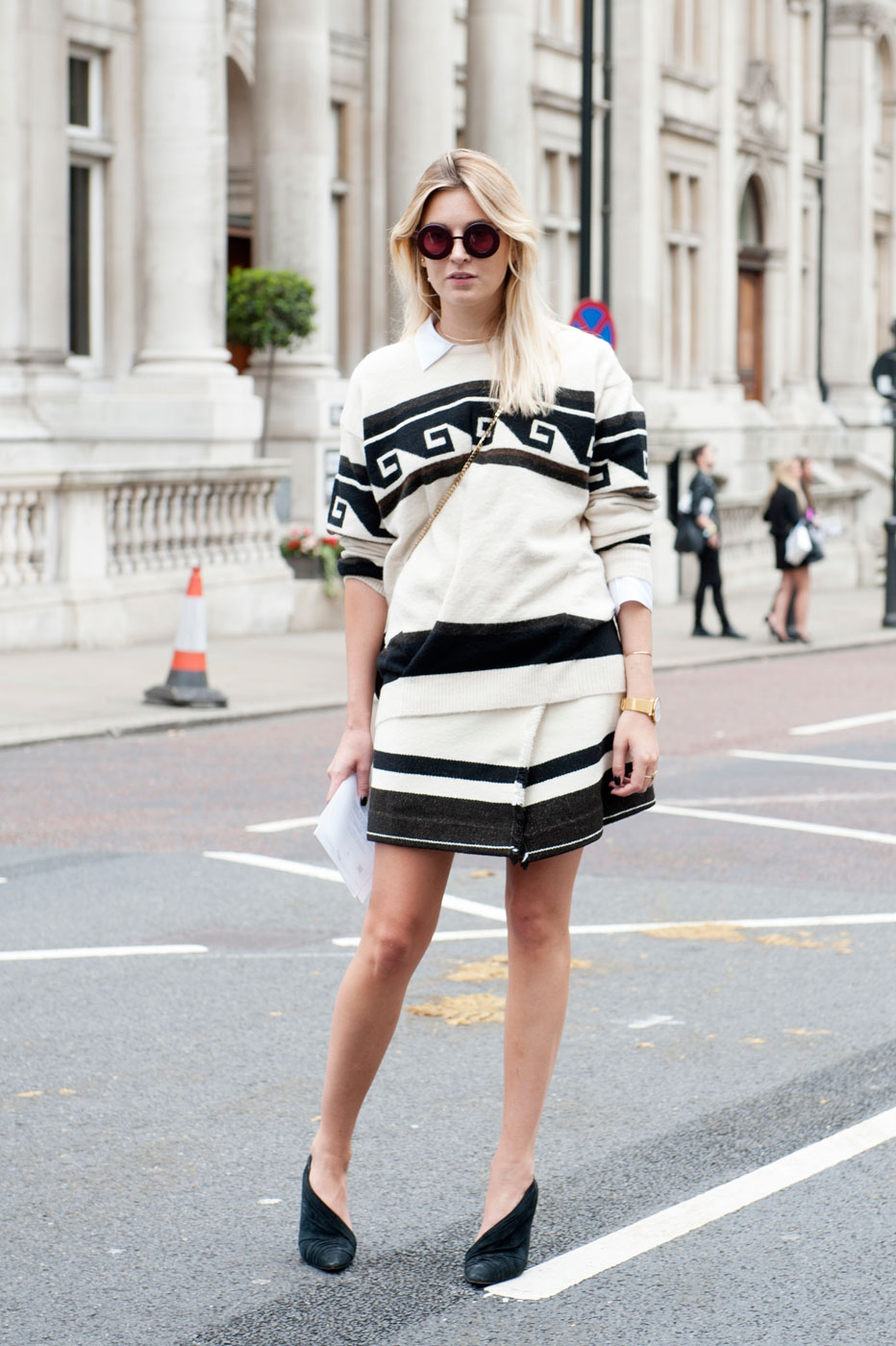 Isabel Marant ‘Samuel’ Sweater and ‘Adelaide’ Blanket Skirt
You can always count on Isabel Marant to produce gotta-have-it items every year, and in 2014, it was her cozy oversized Samuel sweater paired with her wrap-style skirt, that was a big hit with street style stars. 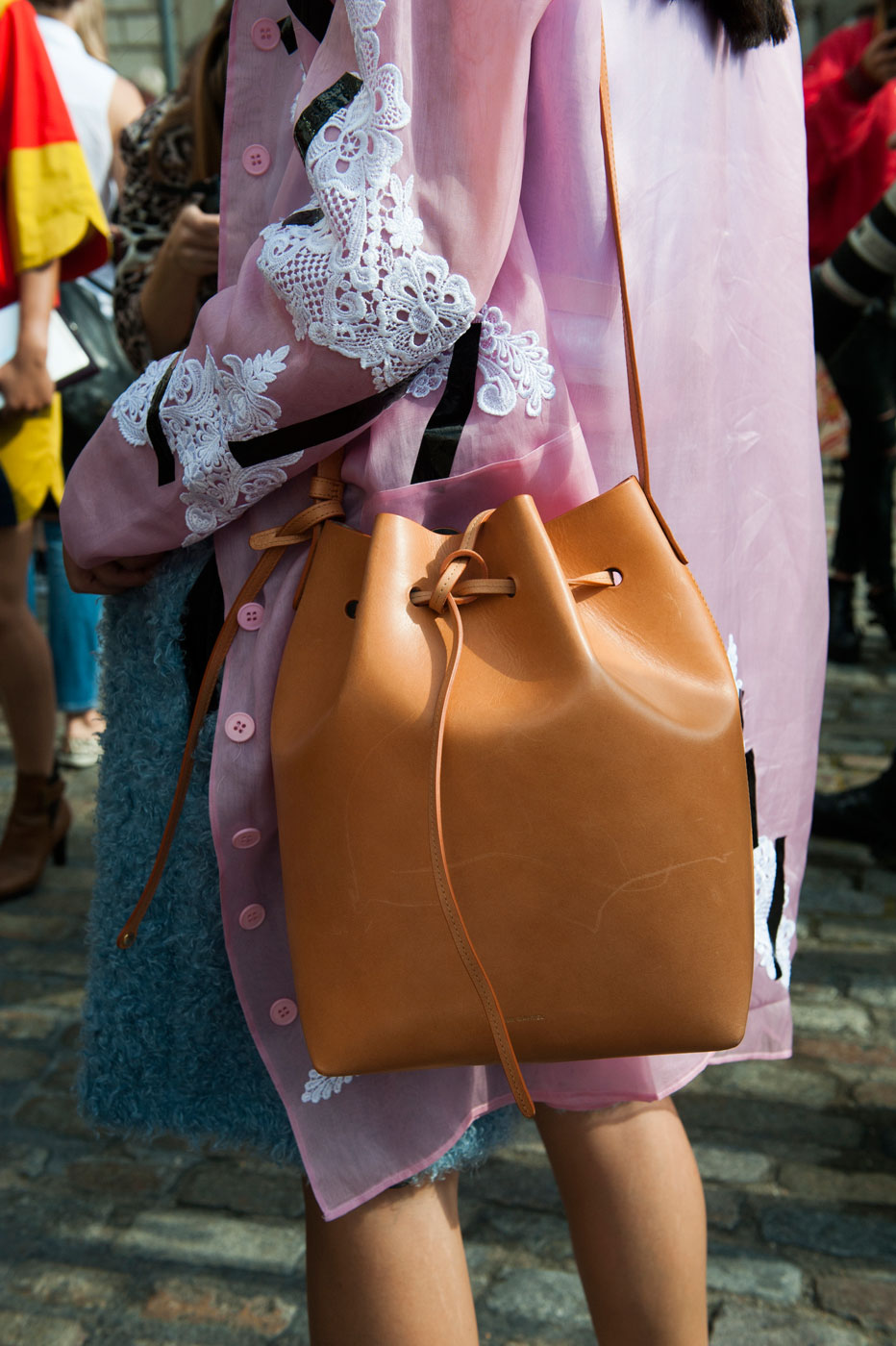 Mansur Gavriel Bucket Bags
A young label managed to do the impossible this year: Create bags that had the fashion crowd in an absolute tizzy but that didn’t look particularly trendy or status-driven—a clear departure from our obsession with flashy status bags.

However, there was no denying that—among the fashion crowd—Mansur Gavriel’s bucket bag was a status symbol in 2014, even if the founders didn’t design it that way.  The bucket style sold out everywhere, was listed on eBay for almost triple its price, and—after its inaugrual collection—the label raised its prices from $495 to $610 and $695, an obvious response to the fact that people want these bags because of their rising fashion cred. 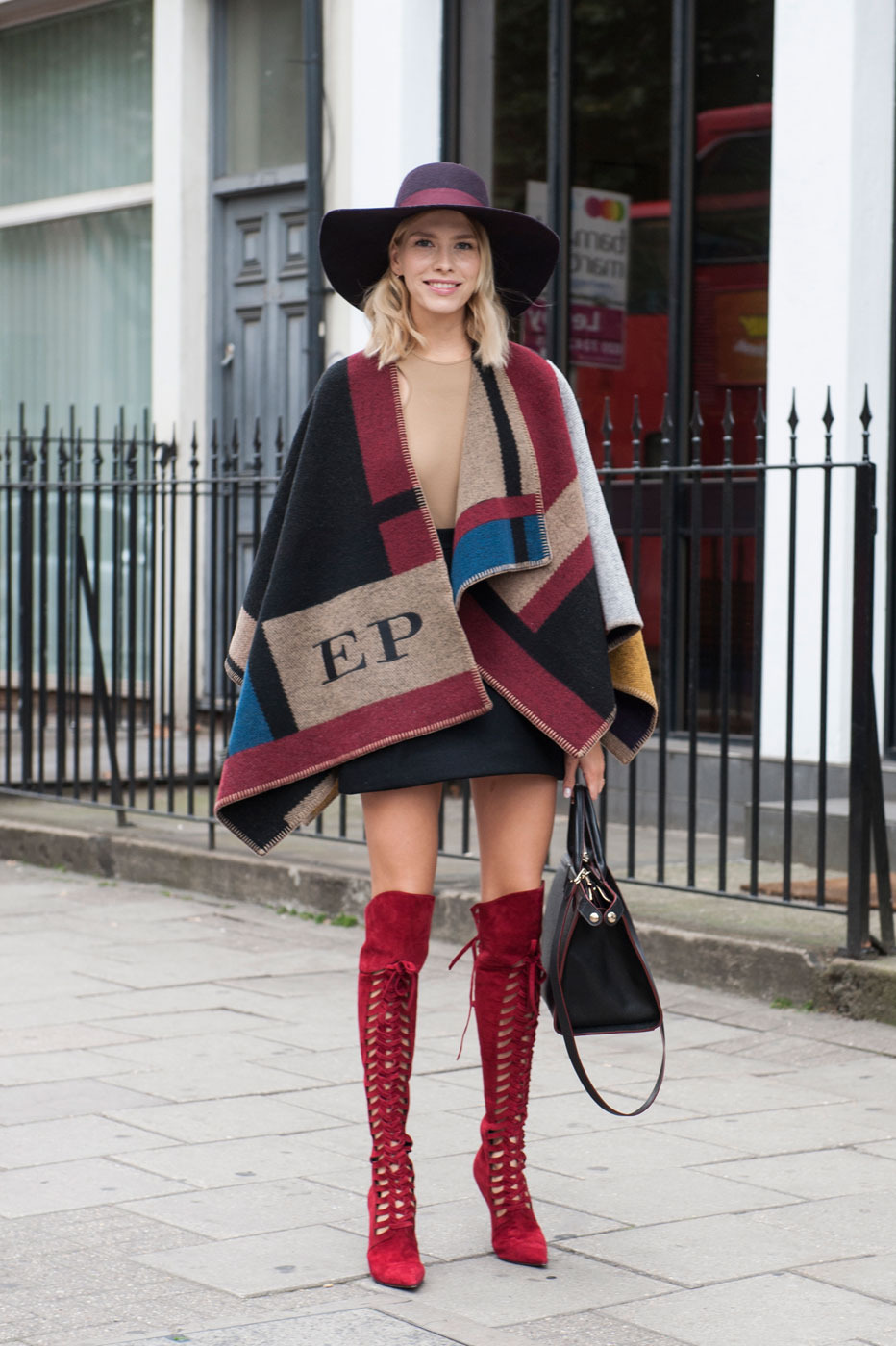 Burberry’s monogrammed blanket cape
During its Fall 2014 runway show, Burberry paraded top models down the catwalk wearing blanket capes monogrammed with their initials. In what felt like a second later, every It-girl and fashion insider had one, including Olivia Palermo, Elena Perminova (above), Suki Waterhouse, Rosie Huntington-Whiteley, and Sarah Jessica Parker.

Stella McCartney shoes
From the beginning of the year to the end, Stella McCartney footwear was a definitive street style staple. From her chunky track-soled heel that spanwed a thousand knock-offs, to her star-print Elyse lace-ups and slip-in platform loafers, we couldn’t get enough of Stella’s decidedly un-dainty shoes in 2014. 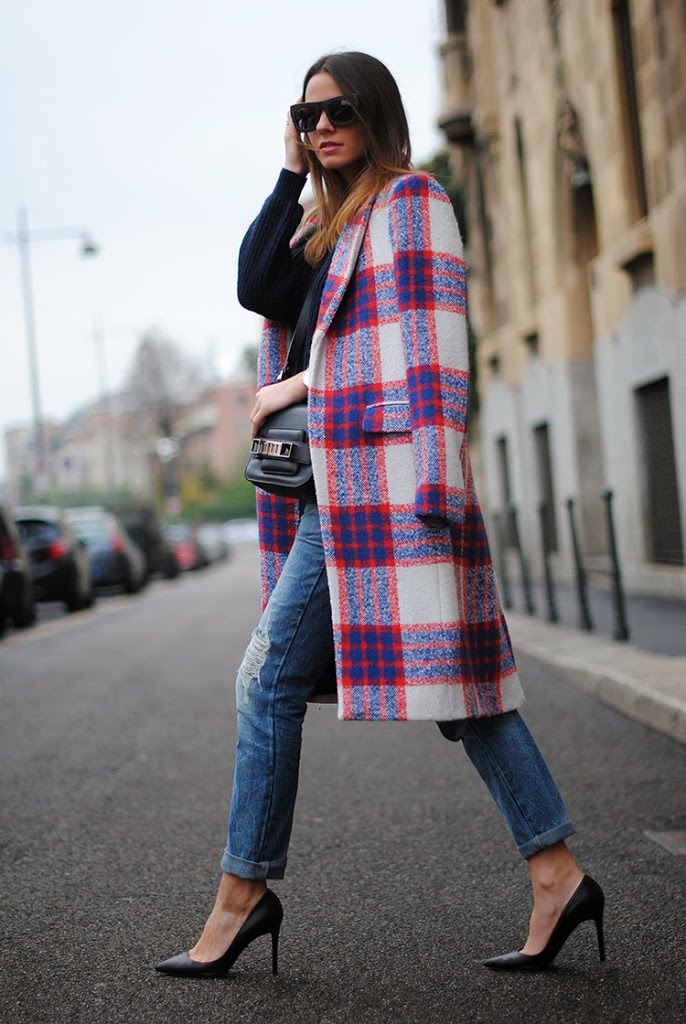 Zara’s plaid overcoat
Sure, it might have been artfully “inspired” by Céline’s version, but fashion bloggers couldn’t get enough of Zara’s red, white, and blue plaid overcoat, making it a street style staple of 2014. 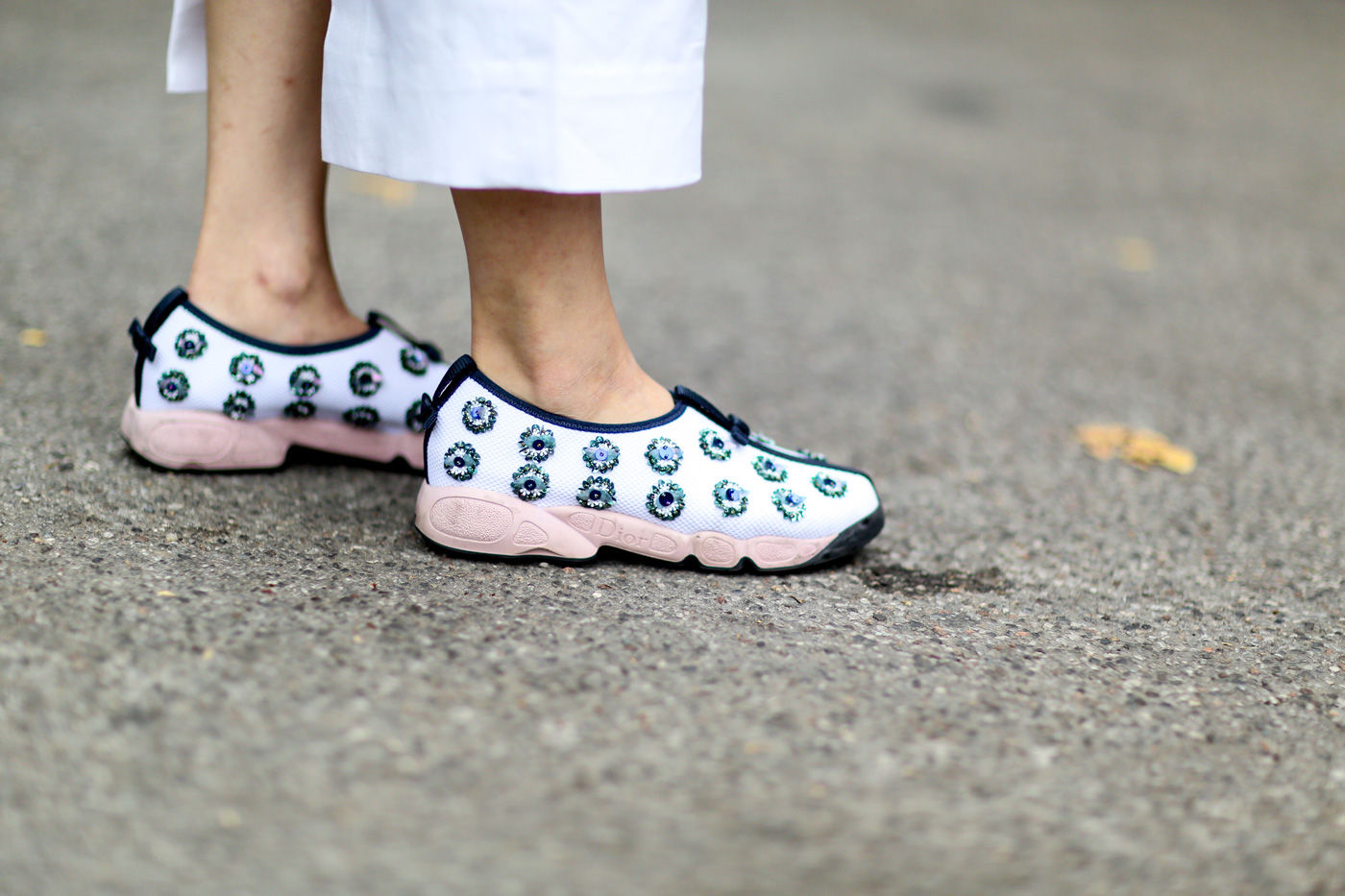 Dior sneakers
Christian Dior’s $1,100 embellished kicks, dubbed “Fusion” sneakers, first made an appearance on Dior’s Spring 2014 couture runway, paired with intricate lattice-cut cocktail dresses and structured strapless dresses, and a season later, it was hard to look at street style snaps and not see the shoes. Vogue China editor Angelica Cheung was wearing them, so were fashion it-girls Natasha Goldenberg and Hanneli Mustaparta, fashion bloggers Susie Lau and Chiara Ferragni, and a host of other insiders. 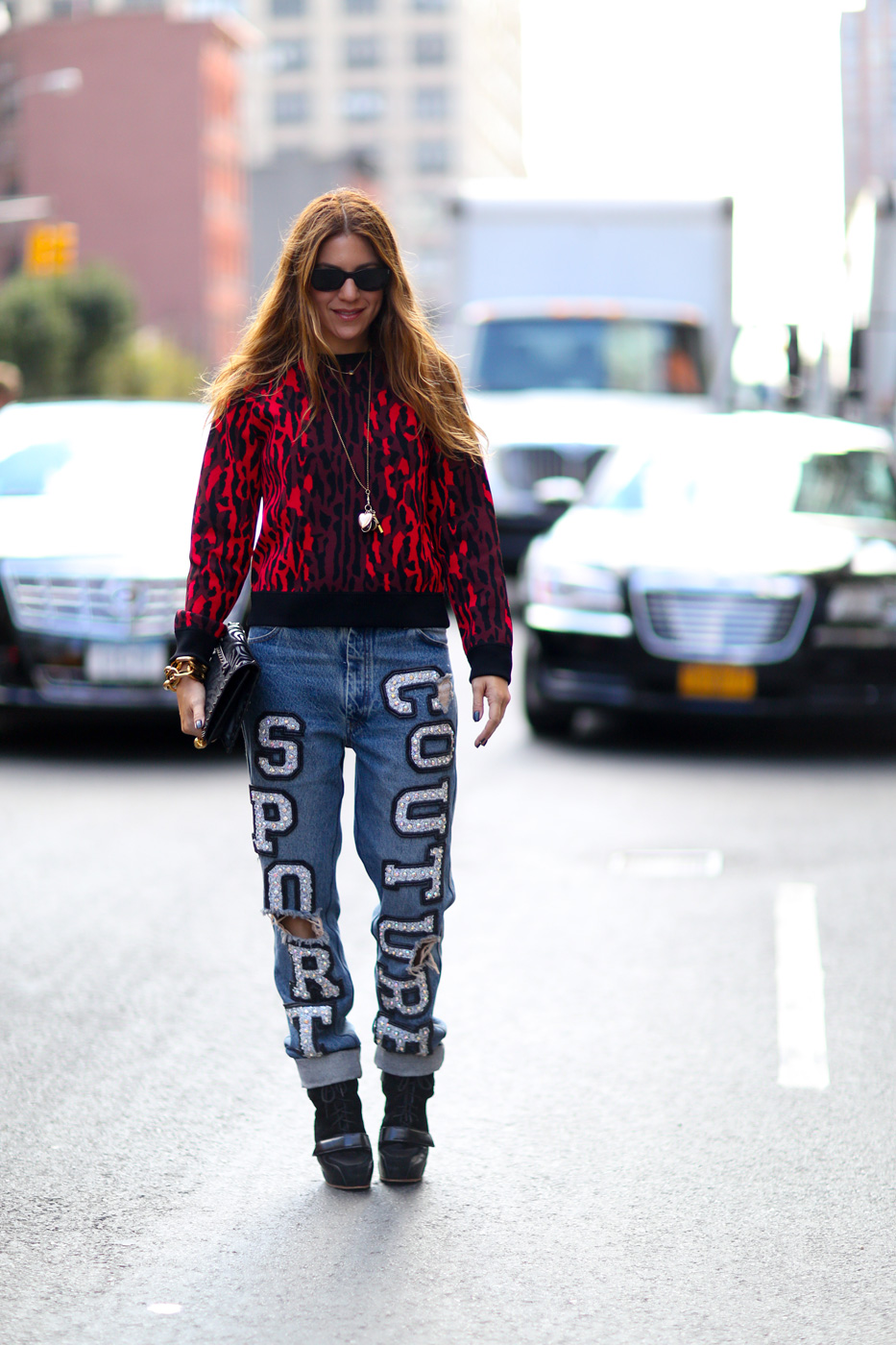 Ashish Embellished Jeans
Not every street style starlet stuck to understated denim this year: We saw several step out in Ashish’s $1, 380 boldly embellished jeans, emblazoned with sayings like “Sport Couture,” and “Vogue Jeans.” 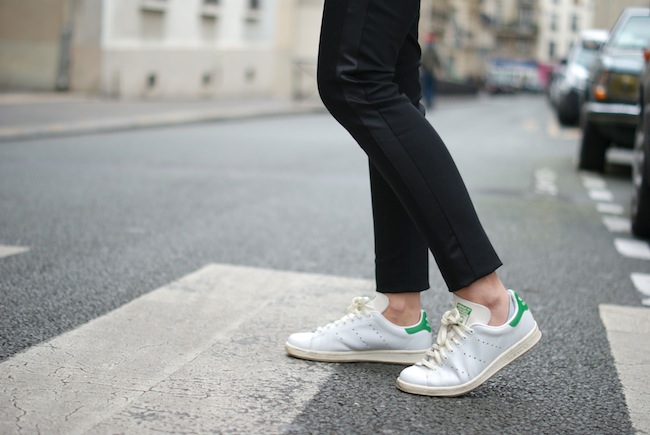 Stan Smith Sneakers
Arguably the most widespread street style trend was Adidas’ $75 Stan Smith sneaker, which was spotted on pretty much every editor, blogger, and insider this year, who paired them with everything from leather pants to Chanel tweed skirt suits.

Another sign that the shoe was having a serious moment—designer labels started to copy them, including Isabel Marant, Sandro, and Saint Laurent, who introduced a leather white sneaker in 2014 for $575 that feels just like a Stan Smith.