If you’re new to The Umbrella Academy, welcome. You’re in for a wild ride. If you’re already a fan of the series, welcome back as we rank The Umbrella Academy powers from least to most powerful. To disclaim, none of the Umbrella Academy powers are weak. Each has its purpose and each can hold their own in a battle. (Yes, even Klaus. If you need more proof, take a look at the epic superhero battle in the first episode of season 2.) But, because we have nothing better to do as we wait for the next season, we thought we would break down why some characters are more powerful than others. (Again, all of this is subjective, so, really, all of the Umbrella Academy members could kick our asses if they really wanted to.) 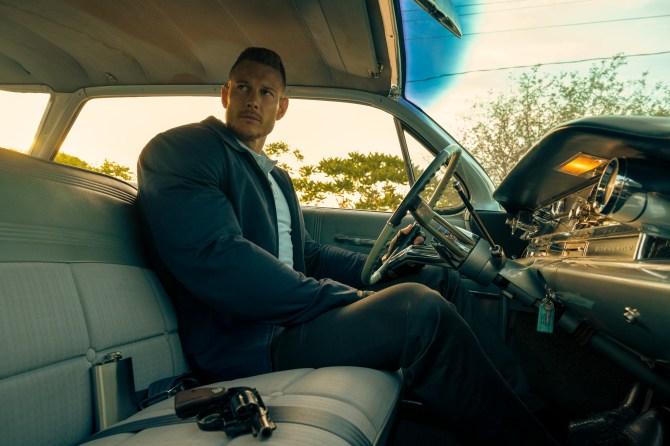 In any other universe, Luther would be the most powerful person in the world. But in The Umbrella Academy, super-strength can only take him so far. Though Luther is strong—really strong—he doesn’t have the flexibility in his powers that some of the other Umbrella Academy members have. Sure, he can throw large objects and pretty much take down anyone in hand-to-hand combat, but when it comes to range attacks or powers that are a bit more creative, Luther is more vulnerable. Still, Luther is more strong than the average guy with super-strength. Though he was born with his powers (like the rest of the Umbrella Academy), his super-strength became even more powerful when Hargreeves gave him a super-strength serum that merged his DNA with an ape. Though the serum saved his life, Luther must now live with gorilla-like features, which explains his top-heavy body. While he’s not a fan of his ape-like figure, there’s no doubt that his power was amplified with the serum. 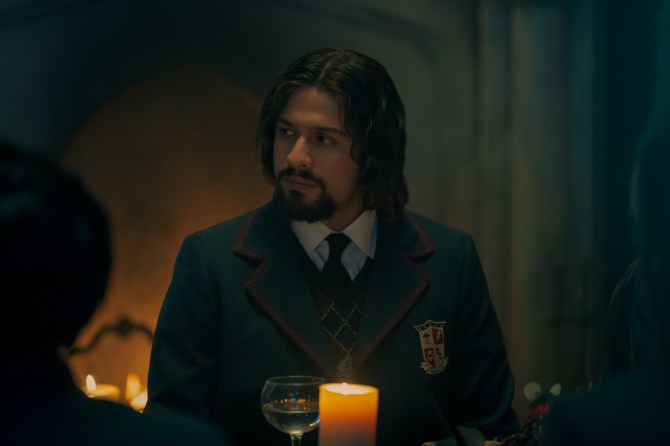 Power: The ability to curve the trajectory of anything he throws

Diego has the power to curve the trajectory of anything he throws. (His weapon of choice is knives, obvi.) Because of his power, he never misses and can strike an enemy from a whiles away. In the epic fight scene in season 2, Diego changed the trajectory of bullets that several soldiers shot at him, so his power affects more than objects he throws. Compared to a lot of superhero powers we’ve heard of, Diego’s power is unique and comes in handy in a lot of situations, where he has anything that he can launch into the air and turn into a deadly weapon. Still, compared to some of the other members, his powers do have limitations. For one, when he’s alone with nothing around him, there’s not much he can do besides hand-to-hand combat. (Though Diego excels at that as well.) Plus, compared to other Umbrella Academy members who can attack with more than physical force, Diego’s power just pales in comparison. 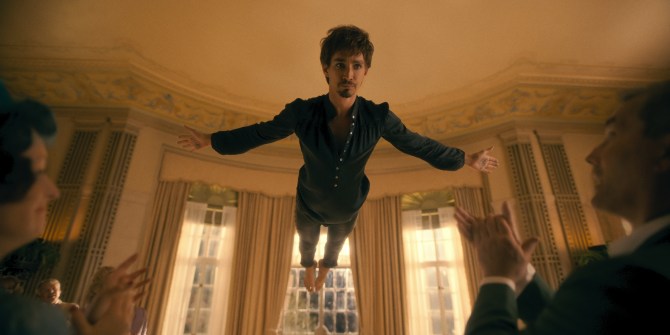 Power: The ability to communicate with the dead and make them temporarily corporeal

Most of season 1 saw Klaus suppress his powers with drugs and alcohol, but once he was able to hone it, we learned that Klaus could not only talk to the dead but bring them back temporarily as corporeal beings. What does this mean? Well, Klaus can’t bring anyone back to life (yet), but he can summon them and harness their powers, like Ben, if the dead is willing to help. This means that Klaus could potentially be the most powerful Umbrella Academy. The only issue that the ones who are more powerful than him aren’t dead yet, so he can’t use their powers as his own. 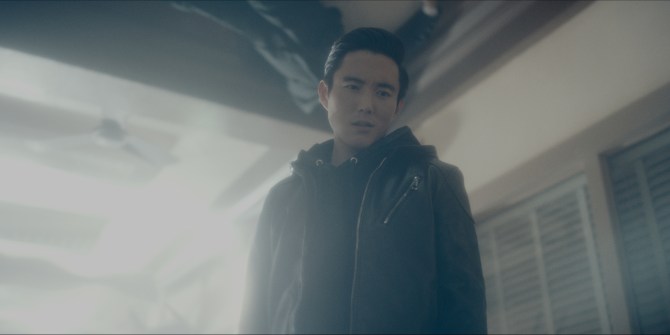 Power: The ability to summon tentacled horrors from his body

Ben is the only Umbrella Academy to have died after his powers overcame him on a mission. We don’t see much of Ben in season 1, but we do know that his power is the ability to summon tentacled horrors from his body. What does this mean exactly? Well, from the looks of it, he can launch massive tentacles from his body that pick up objects or rip people apart. Needless to say, Ben is powerful, and each of his tentacles can wreck havoc on multiple enemies at once. Still, given that Ben isn’t doing as much fighting these days, considering that he’s dead, we ranked in in the middle of the pack when it came to his powers. Also, while Ben’s horrors have more flexibility than, say, Diego’s knives-throwing, they still have their limitations compared to other members’ powers. 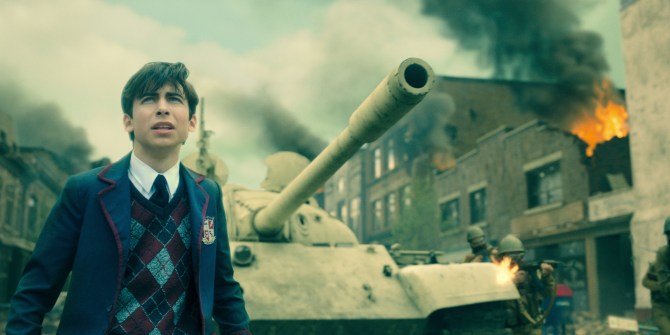 Power: The ability to jump through time and space

Here us out: While Five’s ability to jump through time and space doesn’t seem like the scariest power, rest assured that the boy (man?) is one of the most dangerous out of the Umbrella Academy. For one, Five’s power is more defensive than the rest, which means that he’s more likely to survive if an enemy comes after him. All he has to do is teleport away. Secondly, Five is a trained assassin after spending years on his own while stuck in the past. Though he can’t rip people to shreds like Luther, Five can teleport behind an unsuspecting enemy and kill them before they even know what’s happened, and we consider that a great power. 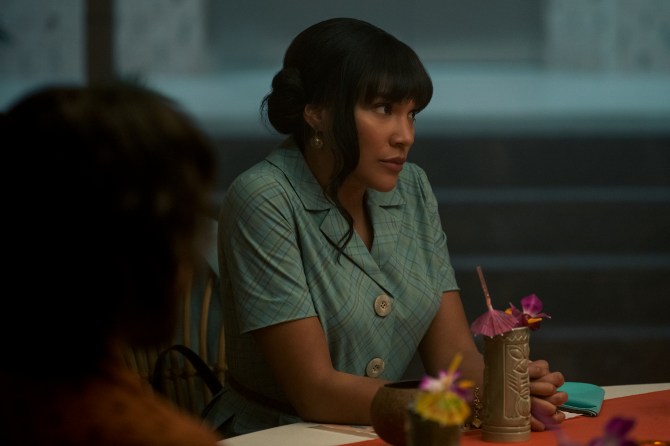 Power: The ability to control minds with the phrase “I heard a rumor”

Allison’s power may also not seem the most flashy, but she has the upper hand over most of her fellow Umbrella Academy members. Here’s how her power works: Allison can make anyone do anything as long as she says the phrase “I heard a rumor” before what she wants to happen. In the epic fight scene of season 2, we see Allison tell some soldiers that she heard a rumor she blew their minds. What happened next? Well, those soldiers’ heads exploded. With just her words, Allison can make someone drop dead. Though she’s not as comfortable using her powers as much as her siblings, after years of abusing it, Allison has an incredible gift. The only issue is when her voice is gone, like in season 1 when Vanya slits her throat. In that case, Allison can’t talk, and if she can’t talk, she can’t use her powers (from what we know), so the loss of her voice really is her Achilles heel. 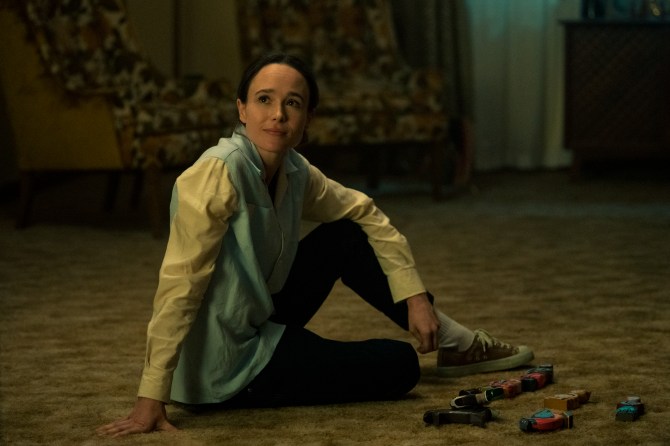 Power: The ability to convert sound waves into a destructive force

Is it a surprise to anyone that Vanya is the most powerful Umbrella Academy member? For one, she’s the reason for the apocalypse in season 1 that sends Umbrella Academy back in time to fix what she’s destroyed. Though Vanya seemed like the weakest of the Umbrella Academy as kids, given that she didn’t even know what her power was (a classic superhero trope), she soon became the most powerful member once she learned that she could turn sound waves into a destructive force that could kill millions in an instant. Sure, Five could teleport behind her or Allison could rumor her, but the ability to kill millions with a massive sound wave can’t go unnoticed.