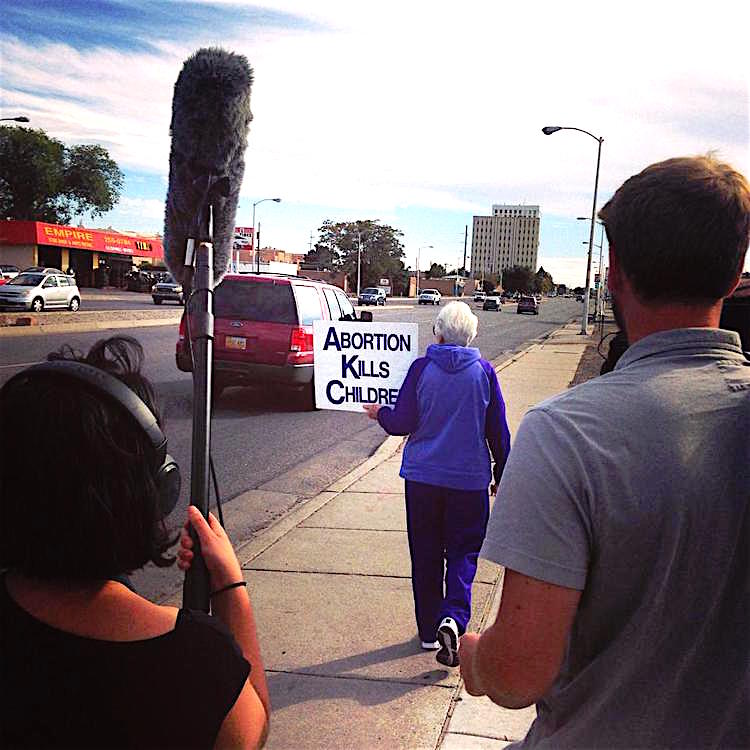 (Courtesy of “The Provider”)

Last year, Maya Cueva was a student filmmaker working on her senior thesis. She and her fellow student directors chose to focus on reproductive-rights legislation in Texas, where they followed the work of a doctor named Dr. Shannon Carr, who travels from New Mexico to provide abortions in one of the 19 clinics left in the Lone Star State. The result: a short documentary named, fittingly, “The Provider,” which turns a sharp eye not only on Carr but also on her patients, the women who desperately need access to abortions in Texas.

Nearly 12 months later, Cueva and her fellow directors are working on expanding the short to a full-length documentary. In the year that’s passed, Texas has sent a restrictive law called HB2 to the Supreme Court that could severely limit abortion access if it passes, which makes the story that much more urgent in an already all-too-timely national discourse about reproductive rights and health care access. Cueva and the rest of her team are currently presenting “The Provider” at the South by Southwest festival in Austin, Texas, and made time to chat with us about her work.

Give us a short synopsis of “The Provider.”
[It’s] a documentary that follows a traveling abortion provider; her name is Dr. Shannon Carr, and she travels from New Mexico to Dallas, Texas. Texas is now facing a restrictive law called HB2, which essentially has made it so there are only 19 clinics left in the whole state. Many clinics have to meet certain requirements that this law states, and many of them can’t meet these requirements, [such as] becoming ambulatory surgical centers, because that costs millions of dollars to make these renovations. Because of this, many clinics had to close.

How did you hear about Dr. Carr and her practice?
It was a long process. We initially read a story about [another] traveling provider named Dr. Willie Parker, who travels from Chicago to the last remaining clinic in Mississippi, and when we found that article, we’d never heard of doctors or abortion providers who had to travel, so we were very interested from the beginning and wanted to learn more about what the reasons were.

We then contacted clinics throughout the United States, trying to find anyone who might want to talk to us, give us a little more information about what they do as a provider who travels. It took a long time to finally get to Dr. Carr, but it was through another doctor who’s based in New York who gave me her contact information, and that’s how we finally got to her.

Did you find a lot of these traveling doctors were willing to talk to you? It seems like there could be a lot of risk involved in this profession.
All providers are facing similar threats, depending on where they’re practicing, so if they’re in the South, they’re going to be facing threats—there’s a lot of stigma around abortion—so it can be pretty unsafe for providers to be out and open about their profession. They have to be careful, especially around journalists, because there have been people who have posed as journalists that are anti-choice activists. They’ll meet with the doctor and then write all these things that just aren’t true, and they’ll post their picture everywhere and basically target them, so it can be very scary for providers to open up.

For Dr. Carr, however, her main objective is reducing that stigma, putting her face out there and putting a name to the face is what it’s all about, like, “I should be proud to be an abortion provider,” which is so important. I think it’s really admirable to face threats. She’s on websites where their sole focus is to target abortion providers, and so she’s up against all these obstacles, she has protestors outside the clinic every day, but to still want to come out and say, “I love my work, I love the women that I’m helping,” is such a brave thing to do. And you can see that on screen. You kind of want her to be your best friend, you feel comforted by her right away—I know I definitely did the first time we met. She’s an incredible woman. 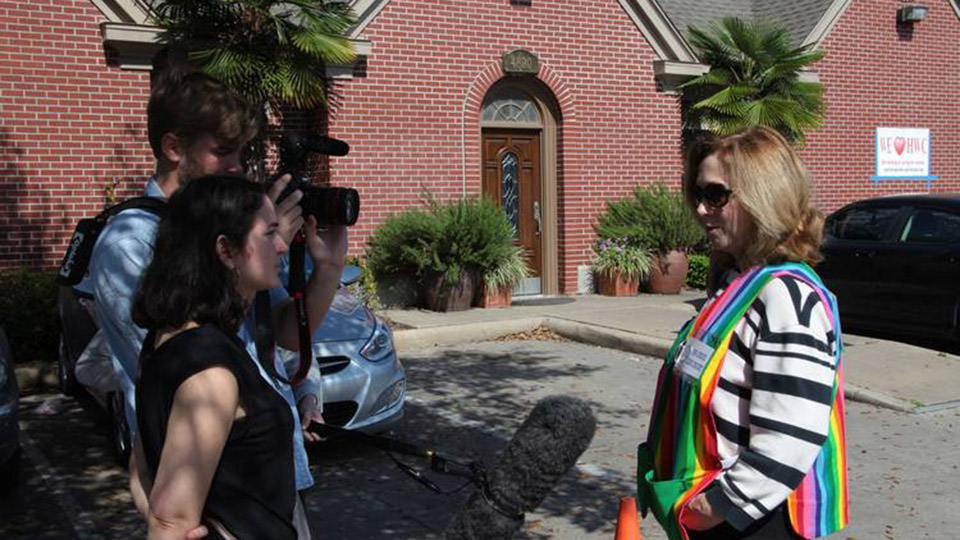 Director Maya Cueva, left, on set in Texas. (Courtesy of “The Provider”)

Do patients also travel?
Patients have to travel very far to receive an abortion in Texas. We actually [went along] with a patient who came to see Dr. Carr, who traveled from Wichita Falls, which is about 150 miles from Dallas. Sometimes they don’t have a way to get there, they can’t take the time off from work, they have kids to watch, or they don’t have the resources to get there. Women with means, mainly white privileged women, are going to be able to travel out of state, and they’ll probably be okay. But for many women without resources, who might be women of color, might be lower income, they can’t. They won’t be able to just buy a plane ticket and go. It has to do with privilege as well; because people who are always going to have access aren’t going to worry about it. Those who are going to be most impacted by the closures of these clinics—what’s going to happen to them?

The need is always going to be there, women are always going to need abortions, and if there’s nothing available to them in terms of clinics, they’ll take whatever measures that they need to have one. Why do we want to put women at this kind of risk and danger?

Why did you choose to focus on this particular facet of reproductive rights?
This idea of a traveling abortion provider was just so interesting. None of us had even known that it existed. Additionally, one in three women will face having to make the decision to have an abortion in their lifetime; we should care because the numbers are there and the need is so great. No one wakes up and thinks, “When I grow up, I want to have an abortion.” These things come from unplanned pregnancies, difficult circumstances; it’s great to have these services if we are not ready to bring the pregnancy to term. It could happen to any of us, even if you are protecting yourself. Not everything is foolproof.

Is this conversation more relevant now than ever?
A film about restrictive abortion access is very timely right now, especially that we are facing an extremely historical Supreme Court case, and it’s one of the biggest Supreme Court cases on reproductive rights since Roe vs. Wade. This is happening right now; if they rule in favor of HB2, there will only be 10 clinics left in the whole state of Texas, which will definitely affect the reproductive rights in other states as well. And the scary thing is that we’re watching this unfold in real time, you don’t know what’s going to happen. 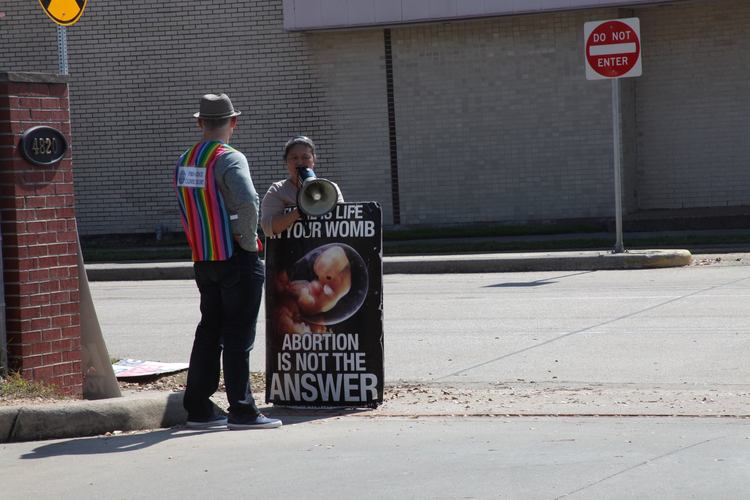 (Courtesy of “The Provider”)

How can people get involved to ensure that reproductive rights are going to be a choice for women in the future?
The best way is by being informed about what’s happening around reproductive rights in this country. It’s not just Texas. In fact, in Oklahoma, a bill passed that abortion providers’ licenses are being revoked. Abortions are a constitutional right, but if this keeps [occurring] and people aren’t being informed or don’t think it will affect them, then what’s going to happen to you? If you’re a woman or you have a uterus, you might have to face having an abortion at some point, and if you’re not acting now to make sure there’s safe and legal access, then what will happen when you or someone you know and love might have to face this?

Voting is also important—do your part to make sure that these anti-abortion laws are struck down. Vote for candidates that support and prioritize your reproductive rights, health care, and access. Start a dialogue with friends, family, loved ones, anyone you know. That’s what we’re trying to do with this film. We’re trying to start a dialogue, spark conversation about access to health care and reproductive rights. If you want to learn more about our film or reproductive rights in this country, I would definitely encourage you to visit our website, watch our short film that we have there, and contribute in whatever way you can.