The Politician season 2, which premiered on Netflix on June 29, follows the race between Payton Hobart and Dede Standish for a seat in the New York State Senate. Payton, who lost the election for Student Body President in The Politician season 1, is a New York University student with less experience than Dede, but tons of passion, especially around climate change. Dede, on the other hand, is the incumbent Majority Leader, who’s been senator for years and years and has grown tired of the role. Compared to Payton’s ecocentric campaign, Dede and her campaign manager, Hadassah Gold, stick to their conservative platforms.

In the end, Payton becomes New York State Senator after the election ends in a tie and Dede drops out of the election after not having the same passion for local politics as Payton. (She later runs with Payton’s mom, Georgina Hobart, for Vice President of the United States and wins.) So is Payton and Dede’s election in The Politician season 2 based on a real election or any real politicians? So far, there’s nothing confirmed from creator Ryan Murphy, but fans have pointed out resemblances between the storyline and the 2018 election between Alexandria Ocasio-Cortez and Joseph Crowley for a  seat in the U.S. House of Representatives as the representative for New York’s 14th district.

Though AOC and Payton have their obvious differences (he’s a white man from wealthy area of Santa Barbara, California, and she’s a woman of color from the Bronx), there are some similarities in how they were known at the time of their elections, as first reported by Refinery29. Payton, an NYU student, wasn’t well-known in the world of politics in The Politician, and neither was AOC, who’s talked about how she bartender in New York to fund her congressional campaign. 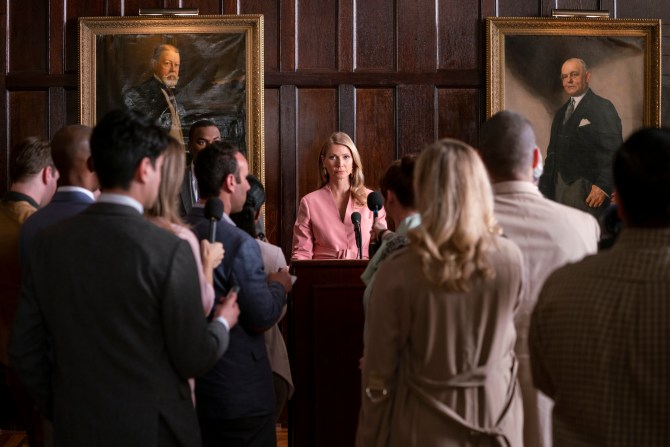 Like Dede (who was an unrivaled senator for years), Crowley, AOC’s opponent, was the chairman of the House Democratic Caucus and had been in congress for more than a decade. As seen in the Netflix documentary, Knock Down the House, Crowley also didn’t take AOC seriously (in the same way that Hadassah and Dede underestimated Payton). In the end, AOC won the election because of the change to her community. Payton won over Dede for the same reasons, and Dede even agreed before she conceded to him that he would make a better senator than him.

Still, there’s no confirmation from the creators that The Politician season 2 is based on AOC and Crowley’s election. Laura Dreyfuss, who plays McAfee in the show, also told StyleCaster in June that the show exists in its “own universe” with little to no references to the real world. “What I love about the show is it’s in its own universe. It’s taking place in our world. It makes it more,” she said. “You’re able to remove yourself from current day and still feel like you’re existing in a parallel universe where this all happening.”

Still, there’s no denying there are similarities between Dede and Payton’s election and the 2018 race to represent the New York 14th district.

The Politician season 2 is available to stream on Netflix.