Mando’s return can only mean one thing: The search for The Mandalorian season 2 theories has also just begun. For fans of the Star Wars spinoff series, finding and debating over what they think might happen in the Disney Plus series is practically a full-time job, what with entire legions of Mando lovers dedicating themselves to making connections over on Reddit. Of course, that also means the number of these theories rival that of the Stormtrooper ranks. Seriously—there are that many.

Given the sheer volume of forums and message boards all dedicated to The Mandalorian Season 2, we figured we’d cut down the work of searching for the most convincing theories for you. Instead of browsing the comments section of yet *another* recap video on YouTube for clues about, say, Baby Yoda’s origin or Moff Gideon’s MO, check out a selection of some of the leading theories about Lucasfilm’s latest addition to the Star Wars franchise.

Ahsoka Is Searching for Baby Yoda

For fans uninitiated with the Star Wars universe beyond The Mandalorian, this theory requires a brief explainer on Ahsoka’s character. (If you’d like to spare yourself the Wikipedia search, we just recommend tuning in to Lucasfilm’s animated series, Star Wars Rebels and Star Wars: The Clone Wars—and don’t be turned off by the animation—we promise these series are about as complex as “cartoons” can get). But for those who can’t get invested in another Star Wars series quite yet, here’s the TLDR version.

Ahsoka Tano is known in Clone Wars and Rebel Wars as Anakin Skywalker’s apprentice, or Padawan. (And she was responsible for some pretty impressive feats, more of which we’ll get into below). What you need to know is that while she never became a Jedi Knight, she can still sense the Force. Some fans believe that she has sensed the Force in Baby Yoda, a.k.a. The Child, and will come searching for him.

Given that Mando is currently on a journey to reunite Baby Yoda with the Jedi, it only makes sense that Ahsoka will help him—after all, she was a member of the Jedi order before leaving their ranks. But Mando’s involvement in Baby Yoda’s fate brings up a whole other theory…

Ahsoka Is After the Darksaber

Another thing about Ahsoka: She was renowned for leading the Siege of Mandalore against Darth Maul. If Mandalore sounds familiar, that’s because it’s the homeland of the Mandalorian creed.

What’s important here is that the last time we see Ahsoka, she was in the presence of Sabine Wren—a Mandalorian warrior and revolutionary leader—who was the last person in possession of the Darksaber before gifting it to Bo-Katan Kryze in an effort to unite the clans of Mandalore. But clearly, that exchange went wrong, seeing as how Moff Gideon shows up in The Mandalorian season 1 wielding it.

It’s entirely possible that she—and perhaps Wren—will be looking to retrieve the old Mandalorian weapon and Jedi artifact in Season 2. Which brings us to our next point…

Mando Will Wield the Darksaber

If the Darksaber has historically been a weapon wielded by the Mandalorian people, it makes sense that Mando himself will manage to retrieve it from Moff Gideon at some point in Season 2. This could put him in conflicting waters with Ahsoka if she’s in a bid to find it herself, but we’re hopeful it could ultimately bring the two together as allies against Gideon—and provide answers as to how he got a hold of it in the first place.

Minor spoiler ahead for The Mandalorian season 2, Episode 1, “The Marshal.” If you haven’t seen it by now, go ahead and catch up over at Disney Plus. But if you have seen the season premiere, then you’d know that fans encountered a mysterious cloaked figure at the end of the episode. And one theory holds that this character is Boba Fett.

Yes, Boba Fett is supposed to be dead. We get into the particulars of how Boba Fett could have survived the events of the original Star Wars trilogy over here, but the TLDR version is that, somehow, Boba Fett made it out of the Sarlaac’s pit alive and has been living in the deserts of Tatooine for around five years.

He’s lost his armor to Cobb Vanth, otherwise known as the Marshal we meet in Episode 1 of The Mandalorian season 2, who has handed it back over to Mando by the episode’s conclusion. Chances are, Boba Fett and Mando are now due for a meeting—and this may just help Mando discover the information he needs to find other Mandalorians out there. We’d bet on it.

We’ll Learn More About Mandalore—And Maybe Even Travel There

With everything we know about the quest and importance of the Darksaber, it seems like only a matter of time before we encounter more of Mandalore’s history. One Reddit user, KaliReed, thinks it’s practically a given at this point: “Going to Mandalore now for sure I bet. The Darksaber is far too important to the Mandalorians to not make a big live-action Mandalore reveal.”

Moff Gideon Is After the Powers of the Force—For Himself

While it’s possible the imperial commander is after Baby Yoda as a duty to someone else, fans have noted that there must be something in it for him: The Force. Now that he’s already wielding the legendary Darksaber, it seems like his next step is to extract powers from “The Child” to use them himself—possibly becoming our next Sith lord. 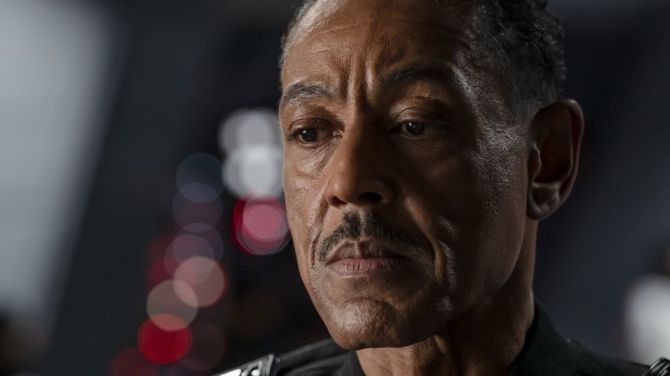 “Gideon’s end game: Find out how to give himself the force. Lightsaber. Vader costume. He just needs the one thing he cants easily steal or have made. He needs to study magic baby in order to figure out how to make Midichlorian juice,” writes one Reddit user.

Most of us thought that Fennec Shand, the mysterious mercenary, was killed. But by the end of Episode 5 in Season 1, an anonymous figure approaches her body—leaving us to believe that there’s hope for the conniving character’s return. As for who the figure is, fans are guessing anything from Moff Gideon or Mando’s forefather, Boba Fett. There’s no doubt that we’ll finally learn who it was in Season 2.

The Mandalorian Season 2 is available to stream on Disney Plus.