“I think we’re all done being fucking knocked around.” Ruby (Tiffany Haddish) expresses to Kathy (Melissa McCarthy) and Claire (Elizabeth Moss) after consoling Claire at the hospital. Written and directed by Andrea Berloff, The Kitchen explores the underbelly of a 1970’s crime-ridden neighborhood from the lens of three women. But strong performances don’t save this film, whose sum doesn’t match its parts. Indeed, the three wives of incarcerated Hell’s Kitchen gangsters have been left without support. With their husbands in jail for three years, they continue the family business and take it to new heights beyond their wildest imaginations.

We meet the three soon-to-be crime queens after their husbands get arrested for armed robbery. This isn’t their first rodeo: the crime group, temporarily ran by Little Jackie (Myk Watford), financially provides for their families after this happens. However, for this conviction, funds are limited because the community isn’t paying their dues. Kathy, Claire, and Ruby investigate and discover Little Jackie has been sullying relationships with the neighborhood. They develop backdoor deals and work to take over the crime business from under Little Jackie and his crew.

At the center of this story is the growing business relationship between the three wives. Kathy is the brains of the operation, with McCarthy delivering a vulnerable but cunning performance. Claire is a domestic violence victim who leverages the new business to learn self-defense. Moss invests in her character, delivering heartbreak and insanity to the audiences. Ruby is the most complex character on paper. As a Black woman, she’s married into an Irish family who makes it clear she’s not welcome. She’s given new responsibilities where she has to co-lead while battling a racist crime structure. Haddish tackles the complexity as best as she can–but it doesn’t always translate effectively on screen. 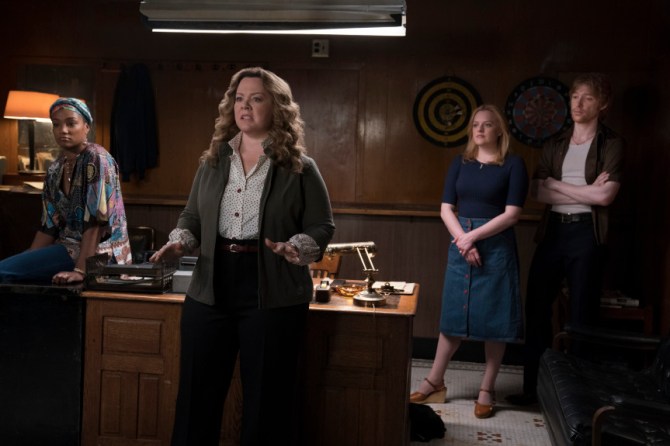 Emphasis is placed on business relationship versus friendship – and that’s deliberate. The script tries to center women’s empowerment but it’s not always effective. This gets very heavy-handed with Kathy’s lines especially: she stresses how she’s putting herself first, how the men don’t know anything about family, etc. While important (and accurate!), the theme feels surface level and doesn’t deliver where it counts. It’s not a requirement for women to be friends with each other. But Kathy, Claire and Ruby barely communicate with each other – both inside and outside the business. Once they gain independent wealth, they no longer rely on each other and drift apart. As a result, the central storyline of women running and leading together becomes moot.

Another ineffective tool used is in this film is the editing. There are many points where shorter scenes are oddly placed in between the story that makes the film feel choppy. In one scene, Kathy is in an argument with her husband but it’s abruptly cut short to move on to the next story– a beat with Kathy and Ruby. Perhaps it was an attempt to inject character development in between the violence. While the intention was a good one, you walk out feeling large chunks of the story are missing.

When it comes down to it,The Kitchen could be summed up as a film with good intentions but less-than-stellar delivery. The actors do what they can with the material given – and some perform better than others. But the true crime here is the editing and lack of depth in the women-centered themes. It’s still a solid crime romp with a few twists and tricks that will keep you entertained. It’s a shame, there was enough in the clip to shoot out something greater – but the trigger was never pulled.