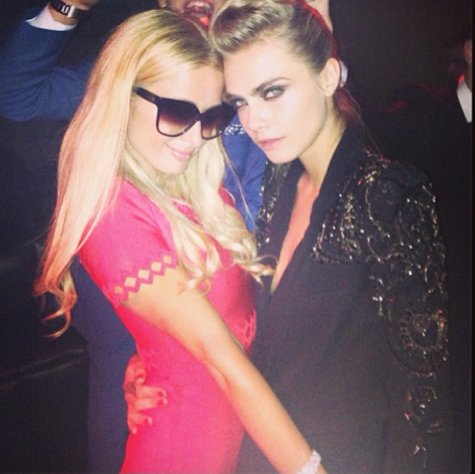 Although the always glamorous Cannes Film Festival came to an end on Sunday, there are a slew of headlines that people can’t stop buzzing about. Yes, the movies are great—and so is the outrageously chic red carpet—but what tends to be the most fun is the celebrity gossip. When A-listers are abroad, they clearly can’t help but have a little fun—so you can bet that there were plenty of juicy tidbits that made their way stateside.

From wardrobe malfunctions to a top model dodging a top actor’s advances, it was a Cannes to remember. Read on for the best celebrity gossip!

New Blonde Party Pals: Cara and Paris
Rita Ora who? It seemed that 20-year-old It-model Cara Delevingne wasn’t missing her hard-partying pop star BFF, as she found a new bleached blonde buddy to rage with until the wee hours: 32-year-old Paris Hilton. The duo showed their love for each other (and, of course, partying) on their respective Instagram feeds throughout Cannes.

Paris’ Boy Toy Gets Physical
Speaking of Paris Hilton, her 21-year-old model beau River Viiperi tagged along to everything during Cannes, occasionally looking like a lost puppy. However, things took a turn when a persistent female fan, desperate for Hilton’s autograph (what year is this again?) began crowding her. He forcefully shoved her away, but the fan kept coming back for more. Eventually, the dashing duo made it to their yacht party—and proceeded to furiously make out for the duration of the event.

Eva Goes Commando at Cannes
It truly wouldn’t be an A-list red carpet event without a wardrobe malfunction, and this time the culprit was 38-year-old Eva Longoria, who pulled up her seafoam Atelier Versace gown to avoid it getting wet. She pulled it just a little too high, showing off way more than intended—and it was clear to everyone there that she’d left her underwear at home for the evening.

Delevingne Disses DiCaprio …
One of our favorite stories from Cannes was the report that notorious model-lover Leonardo DiCaprio set his sights on Cara Delevingne but was rejected, even after “begging” her to go home with him. Not all hope is lost for “The Great Gatsby” star—she did give him her number, so maybe one day she’ll consider answering his calls.

…But he Still Threw a Party With a Yacht of Models
Never one to let rejection get in the way of a good time, DiCaprio threw a huge party on a yacht where he was surrounded by scantily clad models. He was reportedly paying attention to a brunette beauty, so perhaps Delevingne killed his taste for blondes.

Psycho Party Crasher Impersonates Psy
Most of us can’t stand “Gangnam Style” and think the overplayed tune is extremely annoying—but that doesn’t mean that being the performer behind it, Psy, doesn’t have its benefits. Take for instance this man, who snuck into multiple parties—like the swanky Chopard bash—dressed in Psy’s trademark suit and sunglasses. The real Psy eventually got wind of the situation, sending out a series of tweets warning guests about the imposter.

Nicole Gets Anne’s Sloppy Seconds?
When Nicole Kidman stepped out in a stunning ivory lace Valentino gown at the premiere of “Nebraska,” many began to buzz that it was the same dress Anne Hathaway had rejected for the 2013 Oscars after seeing her “Les Misérables” costar Amanda Seyfried‘s similar Alexander McQueen dress. Reps deny that it was the same dress—but many are still speculating it was.