The Haunting of Hill House, which is loosely based on Shirley Jackson’s 1959 novel the same title, became hit when it premiered on Netflix in October 2018. The show was so successful that Netflix announced a second season, titled The Haunting of Bly Manor, in February 2019. Much like the American Horror Story franchise, the Haunting series is an anthology, where each season is about an individual story with some of the same actors playing different characters. Still, given that Ryan Murphy season of American Horror Story is connected (in one way or another), fans wonder if the same could be said about the Haunting franchise.

The Haunting of Hill House followed a family of five kids who were haunted by their paranormal experiences at a their home called Hill House in the ’90s. The series alternated between two timelines: the siblings as adults and the siblings as children. The Haunting of Bly Manor, on the other hand, is a brand-new story. the series follows an American nanny who takes a job at a house in the English countryside called Bly Manor, where two children, whose parents have died, live with a housekeeper, a chef and a gardener. Little does the nanny know that the house is haunted by people who have been killed by the Lady of the Lake, the original owner of the manor who cast a spell on the house centuries ago when her husband dumped her dead body in a nearby lake. 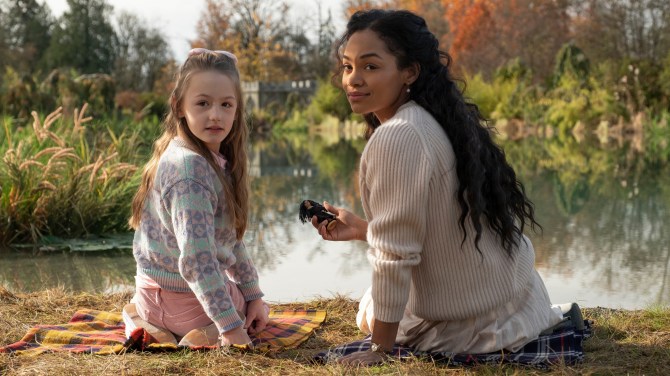 Like the American Horror Story franchise, both Haunting seasons share similar cast members: Victoria Pedretti plays Nell (Hill House) and Dani (Bly Manor); Oliver Jackson Cohen plays Luke (Hill House) and Peter (Bly Manor); Kate Siegel plays Theo (Hill House) and the Lady of the Lake/Viola (Bly Manor); Carla Gugino plays Olivia (Hill House) and the older version of Jamie (Bly Manor). There are also some parallels between Hill House and Bly Manor, though it’s unclear if those were intentional by the creators. In Hill House, Nell’s husband dies, presumably by the Bent Neck Lady. In Bly Manor, Dani’s husband also dies in a car accident. Both Dani and Nell are played by Victoria Pedretti. Likewise, both Hill House and Bly Manor have a “lady” who haunts the homes: the Bent Neck Lady in Hill House and the Lady of the Lake in Bly Manor. Each of these ladies were also once residents of the home: the Bent Neck Lady is Nell, whereas the Lady of the Lake is Viola. Both seasons also share similarities in the children, and how the kids are the ones who come in the most contact with the ghosts.

But other than that, it looks like that’s where the parallels end. While there are for sure similarities between the seasons, they’re not necessarily connections, but Easter eggs for viewers. “It was really important for all of us not to play the same notes we played for the first season,” creator Mike Flanagan told Cosmopolitan UK.

He continued, “At its foundation, the Haunting series is very much about haunted spaces and haunted people. The way we make those things dance together is really going to be what’s uniform about Hill House and Bly.”

The Haunting of Bly Manor is available to stream on Netflix.