Little did she know that Hannah Grose—a housekeeper at a haunted mansion in the English countryside who, unbeknownst to her, was pushed to her death by a possessed child—would be so crucial to the plot of the Netflix miniseries, which premiered on Friday, October 9. “I was tied up with other things, and [creator] Mike [Flanagan] emailed and was like, ‘Have you read episode 5?’ I was like, ‘No What is going on with episode 5?’” Miller recalls. “Then I got to it, and I was like, ‘Shut the front door! What?! I’m a ghost! Shit! I’ve never played a ghost before! How do you play a ghost?’ Then I realized, I’m playing a ghost who doesn’t realize she’s a ghost, so I guess that makes me a ghost who’s human. There was this delicate balance.”

The Haunting of Bly Manor—which is a follow-up to 2019’s The Haunting of Hill House—centers on an American teacher named Dani who takes a job as a nanny to two English children whose parents died. As the days pass, Dani—along with the home’s housekeeper, chef and gardener—learn that the manor (and its residents) have more secrets than they thought. Though The Haunting of Bly Manor sure has some scares, Miller promises that it’s more of an emotional journey than a scary one. “It’s not as scary as it might seem,” she says. “Get ready to laugh and get ready to cry. Bring your Kleenex.”

Ahead, Miller talked to StyleCaster about what it was like to film The Haunting of Bly Manor’s dream scenes, what makes Dani and Jamie’s relationship different than other gay on-screen romances and and the IRL horror story on set. 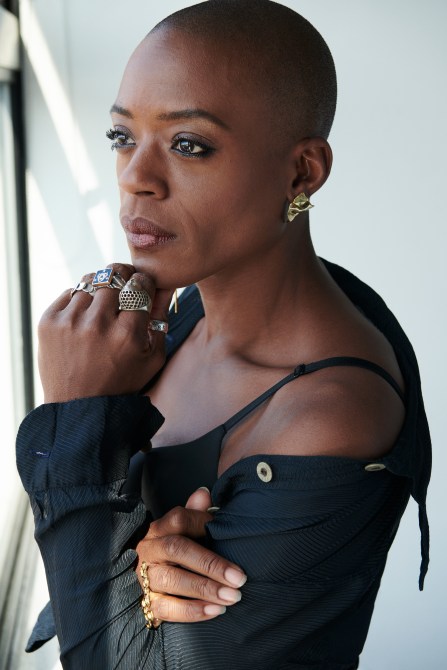 “When I got the sides, I was like, ‘Well. I got to do my due diligence. I’ll watch the first season, Hill House. Oh my God. I was absolutely obsessed. I watched one episode, and I was like, ‘Right. I’ve really got to learn some lines now, so I can put some stuff on tape.’ Two episodes. Three episodes. Five episodes later, half past 11 at night, I was like, ‘OK! I’ve got to stop.’ I learned those lines so fast and taped so quickly, so I could get back to watching it. That’s why I went out for it. The first season was so well done. It wasn’t until I got the script that Hannah really resonated with me. I was blown away.”

“We filmed them all at the same time over the course of a day. It was intense. I was dreading it. Not dreading it, but I wanted to make sure I got it right. Rahul Kohli, who plays Owen, is such a little bastard. I love him, but he’s a little bastard. Every time it came to do a closeup of those scenes, he would fart. He’s such a twat. He literally broke the tension with his wind. I had a lot of fun shooting those scenes.

The way I saw those scenes was, it was a whole orange at the beginning. Then the reveal of her actually being dead, it gets a little bit closer. It all starts to get merged. She loses sense of her body and her groundedness. Shooting when they jump from memories into different memories was difficult.You open the door, and you’re in the daylight and then you’re suddenly in the upstairs bedroom. How did you get there? That was difficult in terms of the timeline of what just happened when we’re shooting. Of course, it’s all out of sequence and then you shoot out of sequence, so you’re like ‘Where the hell am I?’”

“A lot of these queer dramas, it’s all about coming out. It has changed more in recent years. Very recently. For Dani, it’s her first lesbian relationship. It’s not about coming out. It just is. It’s just beautiful in the same lens as any heterosexual relationship. I think that’s a testament to Mike, of not making it a big deal like ‘Ooh. There’s two women together.’

It’s not just about coming out. Let’s celebrate queer culture. Let’s progress. Let’s move forward. Let’s look into the good things and the challenges that we face being queer, and it doesn’t necessarily have to be about challenges. Let’s normalize it. When we normalize it on our screens, we have a responsibility, as people in the entertainment industry, to show all sides of our society. If there’s just one story, one narrative then it gets stuck in that place. It’s always a thing to come out. It’s just normal culture, which is why I’m now speaking out about as an older Black female. There are women my age who still don’t, for whatever cultural or family reasons, feel free enough to speak about their sexuality. For the younger generation, they’re not seeing any queer aunties or any gay uncles.That’s one of the reason I’m now kind of going, ‘Fuck it!’ I have nothing to hide. Here I am.” 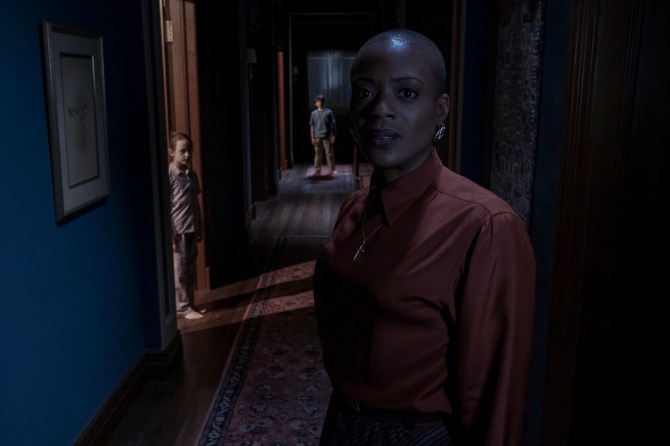 On her idea for another Haunting season

“Absolutely, I would go back. Fingers, toes, legs, what else can I cross? I can cross my eyes.

On the IRL horror story on set

“The first day of shooting, the very first scene we shot was in the dining room. I sit down to have dinner in episode 1, and I shit you not, the lights blew. And they just kept blowing and blowing and blowing. I was like, ‘What the fuck is going on?’ All the electrics have been checked. The bulbs have been checked. They’ve got new bulbs in. They just kept blowing. There was no reason for them to blow. Being the superstitious person that I am, I was like, ‘Is this going to be another Carrie? One of those horror films that happens to the actors afterwards too?’ But that was it [in terms of scariness on set.] In the plot, there are little Easter eggs, so sometimes you wouldn’t notice there was a ghost in the corner, so you would go, ‘Oh! For fuck’s sake!’ One of the little kids with the doll face, there were three of them, they would be under the table or something, and we wouldn’t realize.”

On if Bly Manor is a real house

“It was shipping containers with a green screen over it. It had a real door, but that was out. We did see a picture of it. Fortunately, being from England, you’re used to growing up and seeing manor houses, so it wasn’t too hard to imagine what that would look like. The interior was so superbly done that it didn’t matter. You’re very much in that world.”

On where she thinks Hannah is now