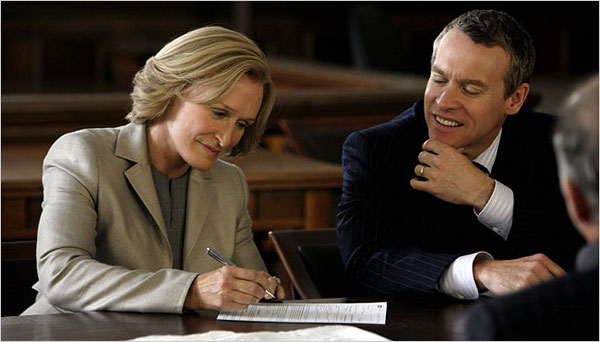 Last night, Twitter was ablaze with people raving about Shonda Rhimes‘ new ABC legal drama “How to Get Away With Murder,” which stars the inimitable Viola Davis as tough-as-nails attorney and law-school professor Annalise Keating who manages to win high-profile cases via questionable strategies—and intimidates the hell out of her students.

If you’re anything like us, there’s a good chance that “Murder” whet your appetite for other juicy programs that deal with the law, and the people who manipulate it. Obviously, there’s been no shortage of legal programming on television, but for every “Law and Order,” there’s a “Harry’s Law,” too.

If “How to Get Away With Murder” is at the top of your DVR list, we strongly suggest you check out six other legal dramas that are widely considered the best ever.

Not only one of the most masterful legal dramas, but some say it’s one of the best TV shows of the last few decades—and we agree. It stars Glenn Close (in the best role she’s every played) as brilliant, ruthless litigator Patty Hewes and Rose Byrne as her protegé Ellen Parsons, a relationship that takes on a captivating cat-and-mouse narrative throughout.

What’s so interesting about the show is that each season is based on one case—modeled after something going on in the world right now—and never steps foot into a courtroom. Instead, it uses non-linear storytelling to focus on the characters’ lives, and the legal maneuvering that goes on among them.

Plus, the guest stars throughout the show’s five seasons are excellent and include Tate Donovan, Ted Danson (who plays corrupt cocaine-snorting CEO Arthur Frobisher), Željko Ivanek (who snagged an Emmy for his role as a slow-burning Southern lawyer Ray Fiske in Season 1), Marcia Gay Harden, Ryan Phillippe, Chris Messina, and John Goodman, to name a few.

Considered one of the bet ensemble casts of all time, this show focuses on the team at Los Angeles law firm McKenzie, Brackman, Chaney & Kuzak, and the drama that occurs inside and outside the courtroom. It ran for a whopping eight seasons and focused on parallel storylines, social drama, and off-the-wall humor, and—throughout its run—highlighted the social and cultural ideologies of the 1980s and early 1990s, as many of the cases dealt with hot-button issues like race, AIDS, gay rights, abortion, and sexual harassment. The series often highlighted tensions between the wealthy senior lawyers and their junior-level counterparts.

Both a legal and political drama, “The Good Wife” follows Alicia Florrick (Emmy-winner Juliana Margulies), who—following her politician husband’s prostitution scandal—goes back to work as an attorney at a prestigious Chicago law firm, and the show basically follows her transformation from a politician’s scorned wife to a high-powered career woman.

Sure, this mid-’90s legal drama was short-lived, but it consistently lands at the top of lists like these. Like “Damages,” this show told a single story—a major murder trial—over the course of a whole season, which ultimately deterred viewers who were then only used to stand-alone cases that got wrapped up in 60 minutes (ahem,”Law & Order”) which caused the format to shift in Season 2.

Starring Daniel Benzali, Patricia Clarkson, Stanely Tucci, and Jason Gedrick, “Murder One” is a bit slow by today’s standards, but the first season is definitely worth watching if you’re a fan of legal dramas. And it has insanely dramatic theme music that’ll stick in your head, too.

After splitting with her husband, New York City lawyer Amy Gray (Amy Brenneman) takes her young daughter to her childhood home in Hartford, Connecticut, where she becomes a judge on the state’s family court. In addition to the family-related cases that she adjudicates, a chunk of the show—and, according to some critics, it’s selling point—is the experiences and interactions between Amy and her mother, a social worker in the field of child welfare played by Tyne Daly.