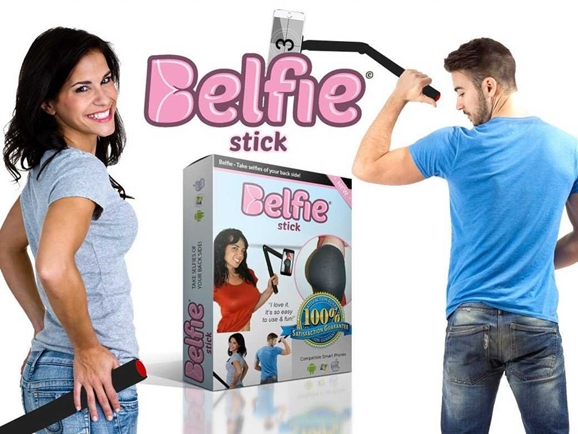 Selfie sticks—poles that allow you to snap a photo of yourself from a distance—were one of the hottest items of 2014, but apparently 2015 is going to be all about The Belfie Stick. We can’t say we’re  exactly shocked given everyone’s rabid preoccupation with derrieres as of late.

Let’s step back for a sec: The term “belfie” was officially coined by Instagram star Jen Selter last year (ICYMI: She’s known for her very shapely bottom), subsequently becoming a huge hit with the likes of Kim Kardashian, Miley Cyrus, and Rihanna, not to mention more than a few regular gals on Instagram. But let’s be real: Taking a photo of your own ass is no easy feat.

That’s where The Belfie Stick—created by the folks behind selfie network ON.com—comes in. Before creating the product, ON polled around 10,000 people and found that they wanted to take butt shots but were having a hard time maneuvering the regular selfie stick to do that, according to Business Insider.

MORE: How to Take a (Tactful) Nude Selfie

Lucky for all, they created a way to combat that problem with a tool made from bendable titanium steel, hence The Belfie Stick. Phew.

Want one of your own? The stick is available for pre-order for $79.99—a small price to pay for the Instagram likes that’ll (obviously) roll in.