Season 16 episode 6 of The Bachelorette was the perfect example of what makes this show so incredible. We have infighting between the men, we have the return of a few fan favorites, we have a silly competition *and* a physical competition and we have a plethora of makeouts. But most importantly, we have Tayshia who has no time for insecure men and petty drama. Just another reason she’s our favorite Bachelorette. Let’s get into it, shall we?

We kick things off with a group date. Honestly, I’m a little confused about this timeline we’re in. When the episode does start or end with a rose ceremony I get all thrown off. But here we are on a group date, the last round of dates from ‘last week’ before the rose ceremony. Sure. 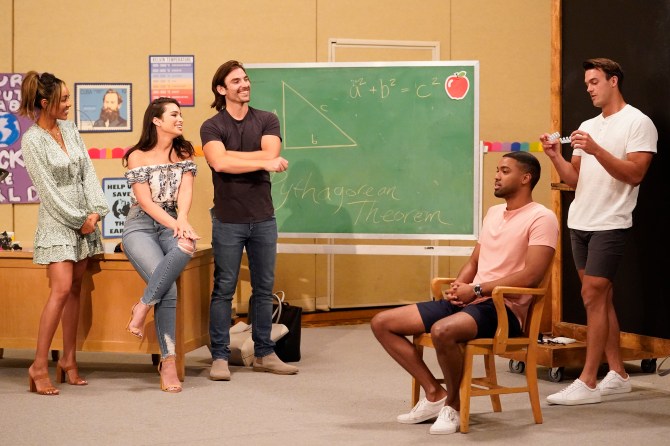 Ashley I and Jared are here to host the Grown Ass Man Challenge, something I hope all women make their prospective boyfriends do from here on out. We have a basic math challenge, a physical challenge, and a cooking challenge (the most important IMO).

Before we begin, Ashley I tells the men to “show up” for Clare, I mean Tayshia, and we all have a good laugh. And then I realized, how would she know about Clare’s incessant “he showed up” comments? Did Ashley get a sneak peek at Clare’s after the final rose? Even then, how would the producers know during filming what a meme that would become? Either someone has killer intuition or the Bachelor producers can see into the future. Both options are 100% believable.

Ok, back to the Grown Ass Man Challenge.

Bennett, a Harvard grad as he loves to remind us, completely flubs the basic math portion and blames it on the wording. How entitled Harvard bro of him. But honestly, I can’t judge, I’m not very good at mental math either.

We move onto the physical challenge, which Bennett excuses himself from because of an old injury (again, very Harvard of him) and we see Chasen and Ed go head-to-head, clearly foreshadowing the drama ahead.

Next up, we have breakfast in bed where all the men are super jealous of Chasen for thinking of that “I’m the main course” line. It’s an obvious one sure, and you can see the look of “why wasn’t that me??” come over each guy’s face as shirtless Chasen hops on the bed with Clare. 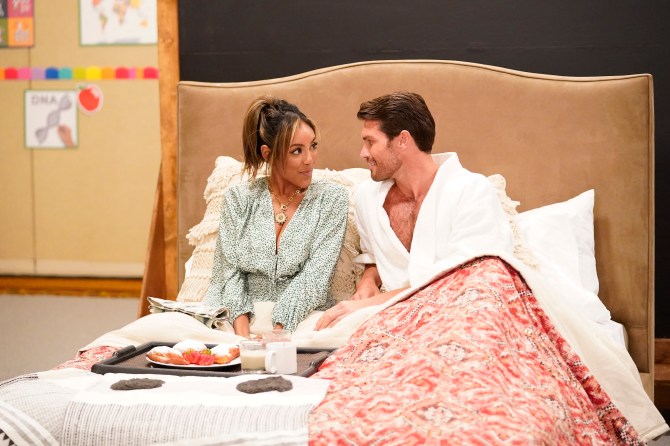 But, it’s really Bennett who takes the cake on this one, actually getting into the bed with Tayshia. Because’s what’s the point of breakfast in bed if you don’t have anyone to share it with?? Bennett gave Tayshia that bold move she was looking for, and even though he epically failed the math portion of the challenge, this put him right back on top.

Bennett wins the Grown Ass Man Challenge and Ed loses, making him the Man Child of the group. He’s a good sport about it which had me thinking, okay at least he’s not *really* a man child. I will eat these words later.

At the after-party, we see Tayshia have some real chemistry with quite a few men. She’s got some great guys in this group and she knows it. Clare, you blew it.

I like the way Tayshia talks about all of the guys. It’s clear she’s actually trying to get to know them and each of their personalities and how that fits in with what she wants. And I believe everything she’s saying! Which isn’t always the case on this show.

Chasen and Ed start yelling at each other at the party and honestly, I’m not sure about what. Ed keeps saying Chasen isn’t here for the right reasons. Good one dude. And Chasen says something about adjectives? Idk and I don’t really care. I don’t think either of these guys are going very far.

Ed goes and tattles on Chasen to Tayshia. Tayshia seems annoyed any of this is even brought to her attention. She asks Chasen if he’s only here for “career leverage”—this girl is very good at talking about being an influencer without actually saying the word influencer—and she tells the guys she doesn’t want to hear any more about it.

“I will take this, I will process this and I will make a grown woman decision.” YES, HONEY. This 29-year-old is more mature than our previous 39-year-old will ever be.

Time to give out the group rose date. I like this thing Tayshia does where she narrows down her group date rose contenders to give validation to the stand-outs, even if they don’t get that coveted rose. Men need to be told when they’re doing well. And she understands that. 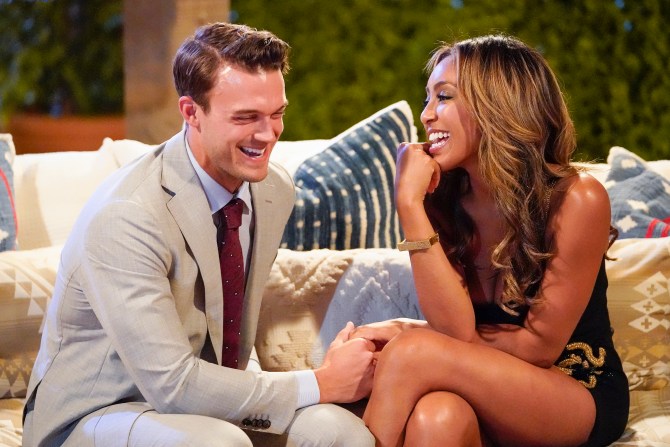 Despite this, Ben, one of the guys she called out, is disappointed he didn’t get the validation of a rose. Tayshia literally just told you how much she likes you, dude. Take that comment and run with it! Have some confidence! I’ve come to the conclusion that all of these men are Man Children.

Next up we have the cocktail party and rose ceremony (wtf is this timeline, I hate it). The Chasen/Ed feud continues and Tayshia sees right through it. I do believe she’s into Chasen so I think his sticking around is her decision. But why is Ed still here? Oh yeah, because we have producers pulling the strings behind the scenes.

The look on Ed’s face when Chasen gets the rose is so petulant, he is the biggest man child I’ve ever seen and he needs to get over this so-called feud. Chasen’s nonchalance about the situation is the right attitude to have and has me thinking he really is here for Tayshia, and not for the clout. But also, I don’t care, he’s hot, and Tayshia is smart. If he’s not a good guy, she’ll see it.

Apparently, this is Tayshia’s first big rose ceremony? This season of The Bachelorette is a total time warp. How very 2020 of them. Jay, Montel and Peter are sent home and I don’t really care because I don’t know who these men are. Next!

We move into the second group date of the episode, a wrestling challenge that I am certain will bring out the worst in these men.

Wells shows up to co-host with Chris Harrison, which, LOVE! But also, I need more details on how and where these guests are quarantining. We’re still living in a COVID-19 world and I would like that to at least be acknowledged? But it’s clear that’s not happening so I guess I need to move on.

Tayshia says she hopes this wrestling competition stays low-key and I think even she knows that’s a pipe dream as she says it.

They slick the guys with oil (why?) and the competition begins. The guys are really into it, but no one is killing each other yet. We have some skinned knees and broken egos, but that’s pretty par for the course on a date like this. 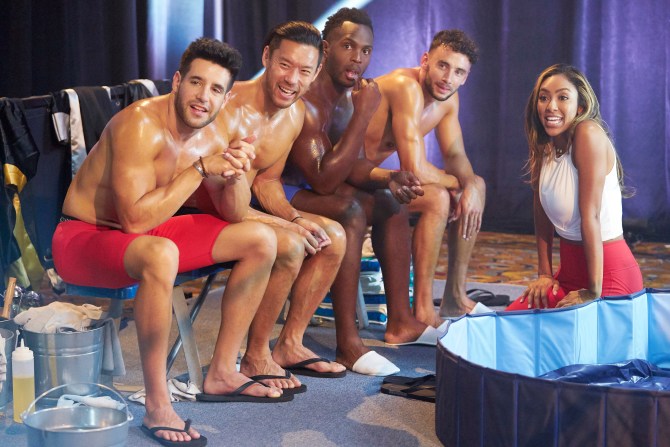 Finally, we get to the match up everyone’s been waiting for—Chasen and Ed—and Ed decides that he can’t do it because of his “chronically dislocating shoulder.” That is the biggest pile of BS I have ever heard in my life. I hate using this word, but it’s the only one that fits the situation. Ed is a pussy.

We’re on a national reality TV show that airs on ABC, nothing that bad was going to happen to you, dude. The fight would have been called before Chasen could have done any damage. Way to cop out and show Tayshia what kind of man you are, Ed. The kind that makes excuses and doesn’t. Show. Up. SMH.

Then, Noah jumps the fence to show Tayshia that he’ll show up for her and she’s into it. The guys are obviously very not. Tayshia invites him to join the after-party and I’m so glad she did because once there, she shaves off his mustache and he suddenly becomes super hot.

It’s like the moment in the ‘90s rom-com where the nerd takes off her glasses and the guy realizes she’s been gorgeous all along! The producers really should have used this moment to pull together a makeover montage, but that’s not a bone I’ll pick today.

More infighting happens between Ed and Chasen and I’m bored, but I did LOL at his talking head. Is he drunk? He does not sound stable.

Ben tries to talk to Tayshia but it’s too late, “the party is over.” Ben, I’m really rooting for you and you need to man up and show Tayshia the love. She’s into you! Seize the moment!

Ending the episode here feels very weird and incomplete. We didn’t even have a one-on-one tonight. I hate when the producers play with the timeline like this. I need a beginning, middle and end to my Bachelorette episode and clearly, I get very thrown off without that. Ugh. Until next week!