We got a fresh start on season 16 episode five of The Bachelorette and I for one am here for it. Tayshia comes in and brings with her good vibes and positive energy we were definitely lacking with Clare. It definitely could have something to do with the way she was edited, but that’s neither here nor there. I’m loving Tayshia as our new Bachelorette and I can’t wait to watch her journey to find love.

The men are practically giddy when they see Tayshia walk in and I can’t blame them. The woman is hot, bubbly and easygoing, basically everything Clare was not.

Things seem to be going well at the cocktail hour when Chris pulls Tayshia aside to let her know they’re bringing in four new guys to the group. Does this mean we’re getting a longer season than normal? I sure hope so. Plus, Tayshia deserves a little “men stepping out of the limo to meet the Bachelorette” moment. It’s iconic, even without the perpetually wet driveway.

Adding new guys into the mix will certainly mean more man-drama with the guys (lots of huffing and puffing and a pissing contest or two) and I for one am here for it. Guy drama is so surface-level and they get so worked up about the smallest things, all in the name of jealousy.

I’m still having plenty of “who is this guy” moments with this group. We’re five episodes in and I still don’t recognize half of them thanks to the Clare and Dale show. Again, SO glad that’s over.

Let’s take a moment for Tayshia and Riley’s conversation about their careers. “I’m more in the beauty and lifestyle space,” is the best way to say “I get paid to post on Instagram.” I’m loving that they guys didn’t really have time to research her beforehand and are thus asking dumb questions like this. 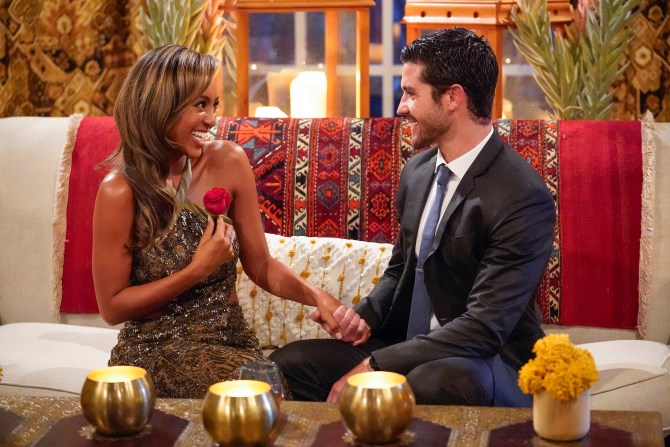 Tayshia gives the rose of the night to Spencer putting a very large target on his back—that combined with his “who scared away Clare” joke. I don’t think this poor guy knows what he got himself into.

Thankfully, Tayshia decides to skip the rose ceremony and get to know all of the guys in the group before making any cuts. The OG men have been through the wringer and deserve a little slack.

Before we can get to Tayshia’s first group date we have to sit through a mini ‘After The Final Rose’ with Dale and Clare and I literally could not care less. Clare’s energy is horrible, especially after watching Tayshia for the past hour. I hope she finds happiness but I don’t care to see her on my TV ever again.

Shoutout to Clare’s “babies!!” comment after Chris asks them what’s next. Um how about a wedding first? This girl really likes to move fast. Dale did not acknowledge the comment but thankfully, Chris was there to call him out. This is why Chris Harrison is the most beloved guy in Bachelor Nation, he gives the people what they want! 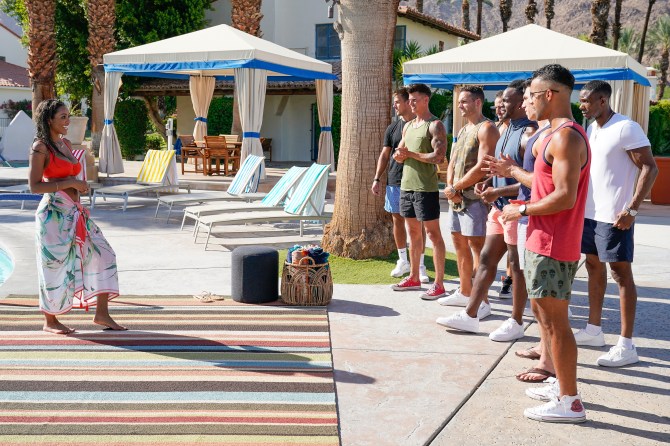 Back to the real show and a game of… splash ball? Is that just basketball in the water? Does everyone know it’s called splash ball? Consider me confused.

Tayshia goes right from the pool to the judge’s table with no hair and makeup touch-ups, just au natural. She’s so low-maintenance and Clare would *never.*

The competition gets fierce, Spencer plays up a bloody lip making that target on his back even bigger, and the losing team has to go home while the rest of the guys get to watch Tayshia eat hot dogs.

Everyone comes back together for the group date after-party and the men let Spencer know that he’s lunch meat. I’m not quite sure what that means, but I do know that Spencer looks a little freaked out by this and doesn’t have the balls to be the villain the producers want him to be.

Back at the other side of the resort, Brendan gets the first one-on-one. I don’t know much about him, but I liked his turtlenecks and he seems pretty genuine, so I’ll root for him.

The group date concludes with a rose for Eazy, which made me happy since he was the one who had to awkwardly interrupt Clare and Dale’s hour-long make-out session a few episodes ago. He deserves a little confidence boost and I’m glad Tayshia gave him one.

After the group date, Jason decides he was too invested in Clare to move forward with Tayshia, which was a bit disappointing. Jason actually seemed like a good guy! Classic Clare, playing with his emotions and ruining him for Tayshia. Reason number 43,897 I *really* dislike Clare.

Next up, the first one-on-one that didn’t make me want to hide under a pillow the whole time. It’s not awkward, no weird forced kisses and no mention of Dale. Thank GOD.

I will say though, these dates are pretty boring. Producers are going to need to step it up in the coming weeks if they want to hold my attention, or at least manufacture some drama in the house to keep things interesting. I did appreciate Chris Harrison’s mad dash around the resort but that’s a one-trick pony I don’t need to see again.

Tayshia and Brendan sit down for dinner and discuss their “married and divorced at a young age” stories. It’s kind of an unfair advantage for him that they both have this in common. And it’s definitely not a coincidence either.

The date ends with kissing beneath fireworks and I am thrilled we have a whole season of Tayshia ahead of us. These guys actually seem, dare I say, genuine? And she is a class act. Can’t wait for next week!