A lot happened on season 16 episode four of The Bachelorette. Last night’s episode had both a first date and an engagement, and it looks like Clare got her happily ever after? I guess we’ll find out for sure next week on a mini “After The Final Rose” episode.

We get right into it with that tense scene between Clare and Chris Harrison that’s been teased for weeks on end now. And it’s actually… not as tense as they made it seem. Those sneaky producers are always hyping up the drama. With all the horrible editing Clare got this season, I was expecting there to be much more of a fall out on her end.

But Clare and Chris seem to have no hard feelings against each other and it really looks like Clare decided to leave on her own terms. How based in reality that is, I have no idea.

Clare and Dale go on their first (!!!) one-on-one date and we learn that Clare’s parents’ names are James and Lili, so basically she’s Harry Potter.

These two people know nothing about each other and are probably about to get engaged. If we thought the usual pace of this show was fast, Clare and Dale just set a serious record. I do feel though that this is the most genuine we’ve seen Dale, probably because it’s the most we’ve seen of Dale without his tongue in Clare’s mouth.

Now that they’ve confessed they’re ‘falling in love’ with each other—which, for the record, is vastly different from ‘I’m in love with you’—they’re ready to get engaged? I guess? Honestly, Dale and Clare don’t seem so sure about this either. I don’t buy the smiles they’ve plastered on their faces.

Their first date ends with a corny AF song from the couple from Listen To Your Heart, and some alone time. The next morning, Dale is still talking about ‘the process’ and ‘the journey.’ He has no idea they’re about to tell him it’s over and he either needs to propose or walk away. But the fact that he thinks she can still date other guys after they slept together is hilarious. That’s not how this show works, Dale!! That was not a fantasy suite date and you’re not Pilot Pete.

Clare and Chris sit down for another conversation. Judging by the look on her face, I don’t think Clare realized this would end in a proposal, even if she ended it six weeks early. She seemed surprised by this information in her conversation with Chris and honestly, I was too. I thought they would just… leave together?

Clare goes to talk to the guys to tell them she’s done. They’re understandably pissed, but it seems they all take the high road in wishing Clare well and pretending they’re happy she found the one for her. Really, I think they’re just worried not getting enough screen time to support their future careers as Fit Tea models. 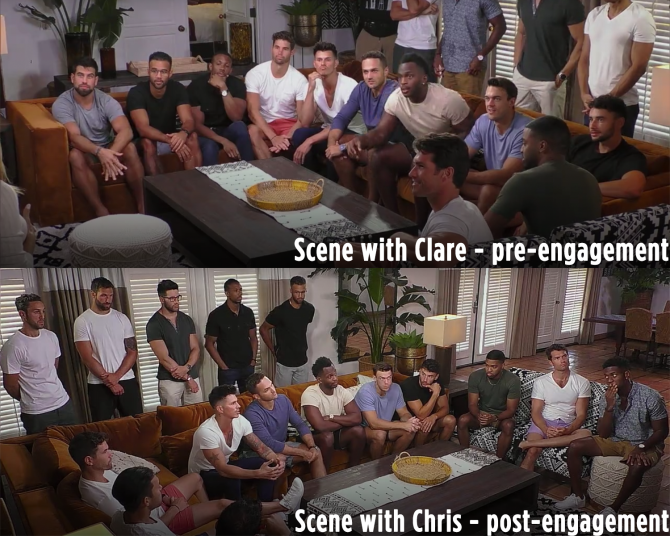 And here’s where things get fishy. The men are in the same clothes and same seating position when Chris comes in later to tell them Clare and Dale are engaged. Even Chris is in the same outfit as earlier. When was this filmed?? Was Clare already engaged when she told the men she was out? Or did Chris come in before Dale got down on one knee? SO MANY QUESTIONS!

Either way, Clare and Dale get engaged (after just one date!!) and live happily ever after, or so they’re making us think. Time will tell whether or not they’re still together. In the meantime, I’ll be refreshing their Instagram pages for a breakup announcement like I’ve been refreshing these vote counts. 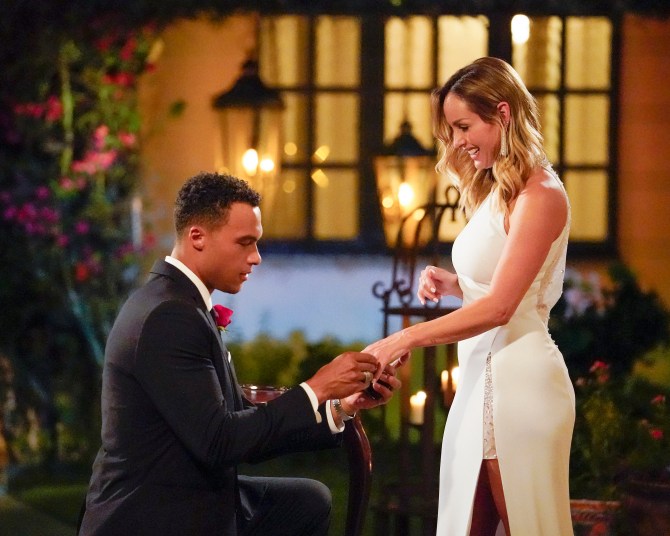 In the scene that was definitely not filmed in the order they’re showing us, Chris tells the guys a new Bachelorette is coming in and the men can stay or decide to go. Of course, they all decide to stay (hello, Instagram clout!), but I definitely felt for Jason who really had a meaningful date with Clare. He got vulnerable and then got dumped. Poor guy. I hope he goes far with Tayshia, he deserves love. Blake on the other hand….

Tayshia steps out of the limo looking drop-dead gorgeous (that dress! Whew!) and I know there is no way the guys won’t go ga-ga over her, no matter what next week’s previews are trying to make us believe.

This season of The Bachelorette is so classic 2020 but this might be the first sh*t-show moment of the year I’m not mad about, because it makes for *excellent* tv. We’re basically getting two seasons in one and I am living for it. Until next week!