More hearts were broken on last night’s episode of The Bachelorette. Katie Thurston is turning out to be the kind of Bachelorette who likes to break up with her men before their date ends (more on that later). We start the episode with Katie divulging to hosts Tayshia Adams and Kaitlyn Bristowe that she’s still unsure about some of her men.

“I don’t know who my final four guys are,” Katie admits. “I’m struggling a little bit, because this week I have two one-on-ones. And in some ways, I want to continue these strong relationships I have and use that to just strengthen our relationship, especially heading into hometowns.”

The final men are Blake, Michael A., Mike P., Andrew S., Brendan, Greg and Justin. The next shot shows them discussing their prospects of making it to hometowns. The all-too-important week where the lead meets her contestants’ families is right around the corner, and two men—Brendan and Mike P.—have yet to have a one-on-one date. You’d think that would mean that the first one-on-one date would go to Mike P. or Brendan. But, nope! Instead, Katie invites frontrunner Greg to spend the day with her. 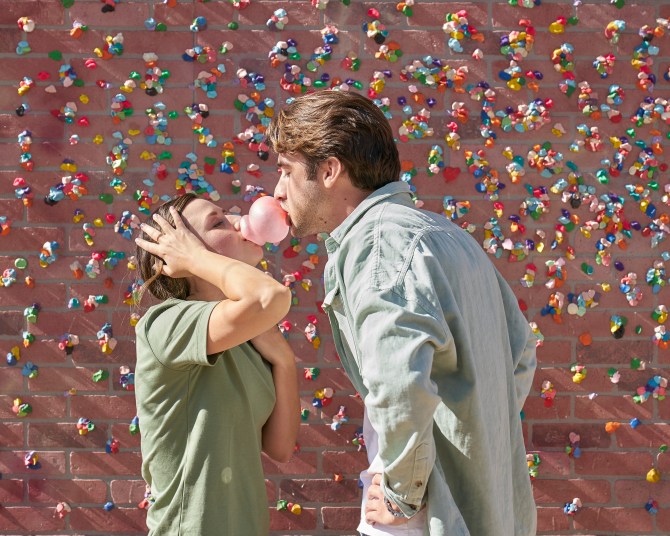 Katie shows Greg a little bit of her Washington roots. They play catch with a fish (don’t ask), shuck oysters and play football. Don’t worry—there’s also romance and plenty of kissing. Greg opens up that some of his reservations throughout the show are a result of childhood insecurities. His candor touches Katie and she, unsurprisingly, gives him the rose.

“Greg is somebody I’m definitely falling in love with,” she reveals in a confessional. Greg echoes her sentiment in his on-camera interview: “I think that I’ve found the love of my life. She’s made me love more than I ever thought I could.”

Next, we have the group date. Blake, Michael A., Andrew S., Justin and Brendan are invited to  see Katie. Yes, this means Mike P. snagged the one-on-date. Brendan is justifiably shook, so he decides to confront Katie in her room. I’d be remiss not to add that he puts on lip balm right before she opens the door. Prepping for an impromptu makeout sesh, Brendan? It wasn’t needed because Katie took the time to send Brendan home before they even made it to the date.

“I want you to know that the first night I met you, you were bold and you always put me first and you were always intentional with our relationship. You’ve continued to put yourself out there, you’ve gone out of your way to make me feel special,” Katie tells Brendan. “I mean, even you being here right now and checking on me means a lot. You are somebody that I felt a connection with. I was like, ‘This is somebody I really want to get to know more.’ But what I will say that is hard for me is because of hometowns being next week, I don’t know that we could get there in time.” 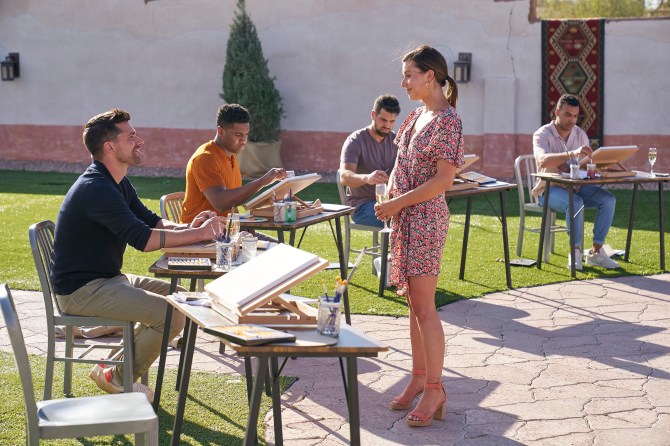 And then there were six. The remaining men (sans Mike P.) head to the group date where they are greeted by photos that look like…vulvas. Katie wants the men to “have fun and loosen up a bit” by creating their own sensual paintings. Of course, they had to share with the class and Blake’s was so graphic that the entire painting was blacked out. That just makes me love him more, honestly. What? I said what I said.

Blake pulls Katie away first at the after party (more points for Blake!) and while he says he’s “not in love” with her, he believes it is “inevitable.” He’s confident in their relationship—justifiably so. Katie also sits down with Justin, Andrew. S., and Michael A., who snagged the group date rose.

Katie and Mike P.’s one-on-one date begins with an awkward start. They’re tasked with cuddling in order to grow their intimacy. There’s lots of nervous laughter and Mike P. talks about his mom a lot. Apparently, Katie reminds him of his mom which is apparently a good thing??

“Things are awkward but Katie’s very calming. She is a nurturer, and man, do I love nurturers,” he tells the camera. “She reminds me of my mom. My mom brings a nurturing touch to everything and every situation she comes in contact with. Katie does the same thing.”

Ultimately his mom, uh, I mean Katie, can’t see their relationship going to the next level. Katie comes to see him while crying (never a good sign) and then drops the bomb

“It’s tough because today would have had to really taken our relationship to the very top, and it didn’t,” she tells him. “I just don’t think it would be fair to make you go to a dinner with me tonight. I don’t think it would be fair to continue our journey and involve our families if deep down I know where my heart is headed. It’s a hard decision to want to send you home.” 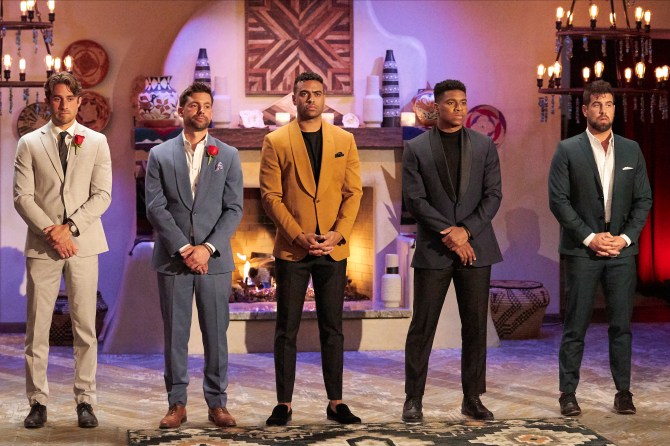 That’s two breakups, and we haven’t even reached the rose ceremony yet. And the drama is just getting started! Katie tells Tayshia and Kaitlyn that she’s struggling before the ceremony. Andrew S., Justin and Blake don’t have roses. Blake’s name is called first and then Justin’s .That means Andrew S. is going home (*sobs*). Katie walks him out to have a tear-filled conversation. Then, he’s off, but not really. He comes to Katie’s room the next day so they don’t end their relationship on such a depressing note.

“I hope you know that it wasn’t, like, an easy decision. It was one of those things that it felt like, even up to like, the last, like, second…I think that’s what makes it really hard. It was the first time I made a decision that I didn’t feel confident about,” she tells him, which I’m sure didn’t make him feel any better. I know it didn’t make me feel any better!

Andrew S. handles the heartbreak like a true gentleman. “I can really say, you know, I fell for you,” he responds. “That’s what, like, makes me, you know, in the pain that I have, it gives me comfort because you know, it’s a feeling I’ve never really felt with anyone. I’m super proud of you, and just love the woman you are. You are just incredible.”

He then pulls a move straight out of a Nicholas Sparks movie and gives her a note to read once he’s gone. The note says, “If you change your mind…I’ll be waiting.” Katie begins to cry and runs—runs!—after him. I’m talking running down the stairs and jumping into his arms. By this point I’m like, “Katie, why are you sending home this gem of a man who you clearly really, really like?!” She asks if he would stay if they could find a way, but he turns her down. He wants her to choose him—not keep him around only to send him home again.

“I wanted to say yes. I’d love nothing more than to be with her,” Andrew S. says in his confessional. “She fucking sprinted down the stairs, and I said no. But I want my future wife to choose me and, you know, I wasn’t chosen. So I had to say no. I don’t want to go through this with her again. I don’t want to be standing at a rose ceremony, waiting for her to not choose me.”

The question on my mind is the same question that I’m sure is on Katie’s: Did she send home the wrong man?