In a scene from the current season of The Bachelorette, Garrett Yrigoyen, a Nevada sales rep with deep brown eyes and a scruffy jaw, is teaching Becca Kufrin how to perform a football tackle. They’re standing a few feet apart in a dim, wood-paneled shop outside of Ventura, California, when Kufrin, a Minnesota publicist with shiny brown hair and big, doe-like eyes, rushes toward him, scoops her hands underneath his butt and lifts him in the air for a few seconds. Moments later, they’re making out. “That’s the way a date should go,” Yrigoyen tells a producer in a later interview.

The scene, from the third episode of season 14 of the franchise (which airs its finale on August 6), is a classic example of Bachelor-fan bait. The music, the low lights, the romantic zoom in on Kufrin and Yrigoyen as their hands caress each other’s faces were all meant to make the audience’s hearts pitter-patter and cement Yrigoyen as the front-runner among 28 men competing for Kufrin’s love. But for many in Bachelor Nation, the scene was far from sweet. 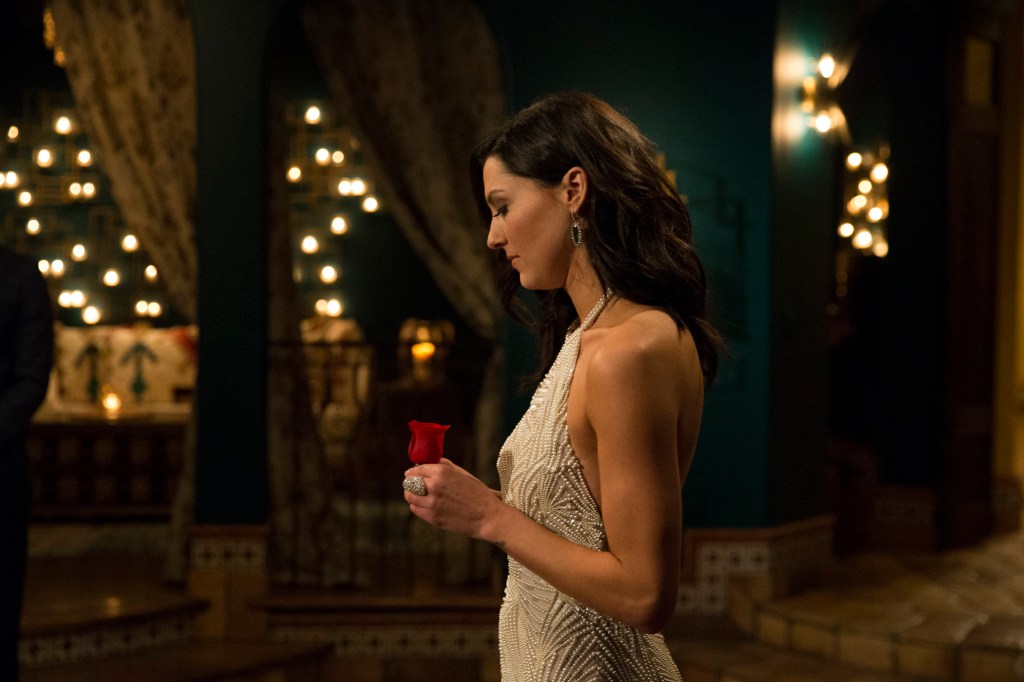 Two weeks earlier, Ashley Spivey, a contestant on season 15 of The Bachelor, called Yrigoyen out for liking several Instagram memes featuring fat-shaming, transphobia, xenophobia and other hateful attitudes, including one calling a Parkland shooting survivor a “crisis actor” and another using Caitlyn Jenner’s pre- and post-transition pictures as restroom door images. It didn’t take long for the news to reach the front pages of Us Weekly and People, and soon, almost everyone in the Bachelor franchise’s 5 million (or more) viewership knew of Yrigoyen’s behavior.

Both Kufrin and Yrigoyen released statements soon after. Yrigoyen apologized for his likes and called them “not a true reflection” of him or his morals, while Kufrin urged fans to “stay open” and not let the scandal cloud their judgement. But it was too late. The damage was already done. Yrigoyen, a fast fan favorite from episode one who received the coveted first-impression rose (typically a sign that he would make it far, if not win the competition), was now seen as slimy and inauthentic. His sweet, small-town persona that made Kufrin blush on dates and gush in interviews didn’t align with real-world facts that had come to light for the audience. The Bachelorette continued to push Yrigoyen as a front-runner, but the narrative that Kufrin, a vocal liberal and Hillary Clinton supporter, would fall for a conservative like Yrigoyen was hard to believe. What was even harder to believe was that the audience would fall for him too.

MORE: The Insidious Invasion of Student-Teacher Relationships on TV

The Bachelor franchise began almost 20 years ago when the first season of The Bachelor aired in 2002. The show was an instant success, but it wasn’t until around three-quarters of the way through that the contestants were no longer seen as simply reality stars, existing within the two-hour confines of the show’s storyline, but as celebrities themselves. They earned magazine covers, became Instagram influencers and were stalked by the paparazzi and media who sought to expose every dark and dirty secret, especially if it contradicted what fans saw on screen. Viewers no longer had only the information that Bachelor producers curated for them, but also a sea of spoilers—some that were meant to be aired later; some that were never meant to make it to TV—that would influence their opinions. The Bachelor became the success it wanted it to be, but in a world where social-media receipts are readily available and someone’s criminal history is a few clicks away, The Bachelor became too big for producers to control.

Now, in season 14 of The Bachelorette, the struggle to avoid spoilers and outside information is more evident than ever. Before season 14 aired, TMZ published a grainy picture of Kufrin kissing her winner in the finale. Soon after, pictures leaked of one of Kufrin’s front-runners on a date with one of her close friends on Bachelor in Paradise, the show’s spin-off where eliminated contestants find love with other castoffs, spoiling a major storyline. And, most infamously, two weeks after Yrigoyen’s Instagram likes went viral, Reality Steve, a Bachelor spoilers site, reported that Lincoln Adim, another contestant on Kufrin’s season, was a registered sex offender and convicted of sexually assaulting a woman on a cruise ship in 2016. Adim, who was eliminated a couple weeks later, wasn’t invited to the show’s “Men Tell All” special, and the show never addressed the scandal on TV, though Chris Harrison, The Bachelorette’s host, was later pressed about the issue in a Glamour interview. “What he did was illegal and against the law, so that is a very easy call,” Harrison told Glamour.

In spite of all that, The Bachelor has a history of using a contestant’s past to bolster its ratings. In season 13 of The Bachelorette, starring Rachel Lindsay, contestant Lee Garrett was exposed tweeting racist and homophobic comments, such as, “What’s the difference between the NAACP and the KKK? Wait for it…One has the sense of shame to cover their racist ass faces.” But unlike Yrigoyen, who has yet to respond to his social media misbehavior on The Bachelorette, Garrett was confronted on the show’s finale, with Lindsay, the franchise’s first Black bachelorette, saying, “I’d be more than happy to give you a Black history lesson and a lesson on women’s rights.”

There’s a clear difference between Garrett and Yrigoyen: Garrett was never a front-runner. He was a clear plant cast by producers to create racial drama on TV. His tweets fell in his narrative as a racist, so it made sense that the producers would milk them in the show’s finale. Yrigoyen, however, has always been one of Kufrin’s endgames. Being exposed as a bigot was never supposed to be part of his storyline. Yrigoyen was supposed to be the man that Bachelor Nation fell in love with and rooted for. Now his reputation is tainted and ever since, the show has been on an apology tour to reverse that. 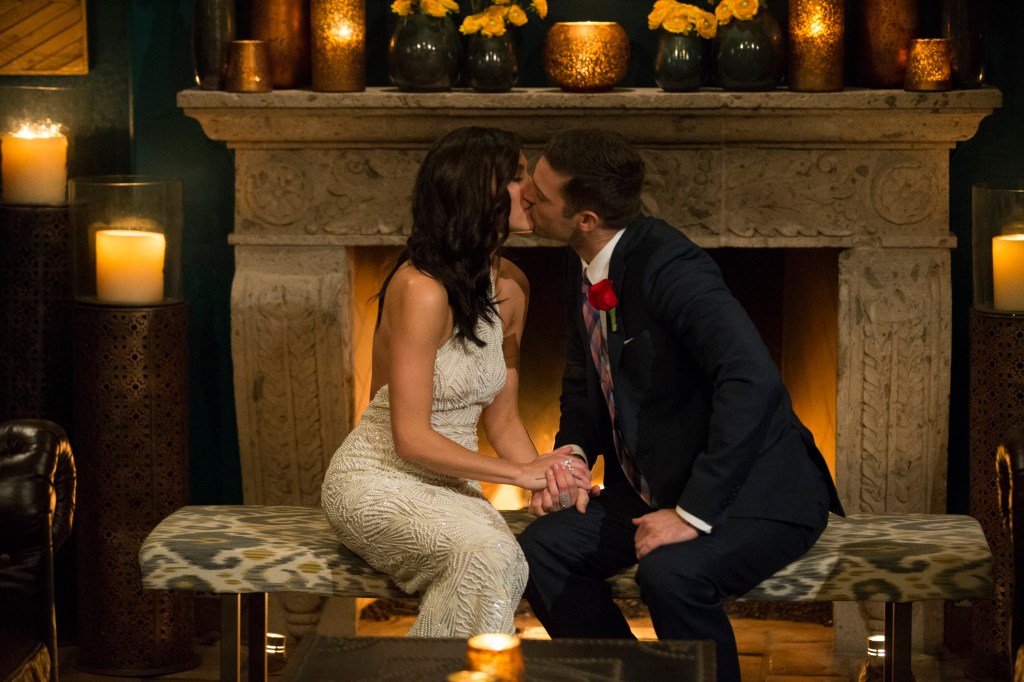 Monday, August 6 is the finale of season 14 of The Bachelorette, in which Kufrin will choose either Yrigoyen or Blake Horstmann as her future husband. If she does choose Yrigoyen, it’s hard to say if they will address the criticism head-on (even Harrison didn’t give a clear answer to whether there will be an on-air apology), as a Bachelor couple rooted in scandal isn’t exactly the foot producers want to end the season on. It’s unclear if Yrigoyen will ever be able to shed his hateful past completely. But what is certain is that he’s not the first unintentional scandal to face The Bachelor franchise, and considering the show’s rising phenomenon, he won’t be the last.