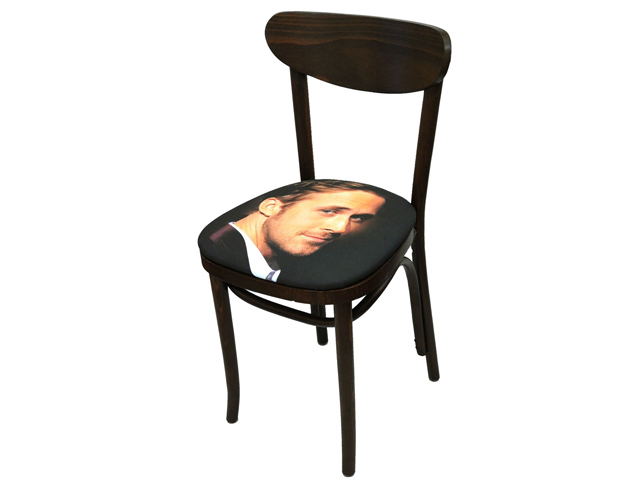 Who among us wouldn’t mind furnishing our apartment with Ryan Gosling—or perhaps Brad Pitt?
After twenty years spent snapping the world’s most recognizable celebrities, New Jersey based photographer Jennifer Graylock had plenty of shots to choose from when she decided to launch Sit on My Face, a collection of cheeky, collectible art chairs, which sell for $950, bearing some of the world’s most famous faces.
“It’s functional art for everyday life,” Graylock told us about her burgeoning business—which will soon include celeb-printed couches. “It’s about happiness and laughter. And if I can make someone laugh looking at one of my chairs, then I’ve done my job.” Graylock shared with us how she hatched her Face Chairs concept, and the famous face that will be immortalized in chair infamy next.
The Vivant: You’re a photographer by trade. Are you using your own images for these chairs?
Jennifer Graylock: Yes, I only use my own photography.
Where or when were most of them taken?
Well the celebrity photography is taken all over the world—New York, Paris, Milan, Rome. Just wherever I am on client jobs, and I’m just out there photographing.
How did you come up with the concept for Sit on My Face? Was there a specific moment of inspiration?
Yeah, actually, and it was really funny how it came about. I had a gallery opening that happened several months back, and the gallery wanted to showcase my celebrity photography in addition to my fine art. I’m thinking, ‘No, my fine art is what I want to show, the celebrity stuff is what I do for day-to-day work, I really don’t want to show that kind of stuff.’ But they pressured me, so finally I acquiesced. I said ‘Well, I’m going to do this, but I’m going to do it my way, so you’re just going to have to deal with whatever I do.’ I was looking at my photos, and thought, it would be so funny to make a couch out of this. That’s when I realized, ‘Oh my god! Let’s make a chair!’ And Sit on My Face was born.
Who was first up?
It wasn’t any particular celebrity. I was trying to figure out who was the most gender-neutral celebrity—as in, a celebrity that both men loved and women loved. So, of course, that was Angelina Jolie. And then the second one was George Clooney.
How do you produce the chairs?
I have a wonderful person that works with me, Martha Peabody, and we just sit there for hours and hours on end putting these things together and laughing our butts off.
What chair is selling the best?
Well right now the most popular is Ryan Gosling.
Of course.
It really cracks me up. But we also have the Anna Wintour chair, which people seem to really like. And then we have the Jennifer Lopez, the Katie Holmes, of course the Angelina and the Brad and the Ryan Reynolds. To poke more fun at everything, I made an Obama chair.
So timely! And which celebs are up next?
The sky is the limit. I’ve basically photographed everyone, so it could be anyone topical, or anyone I think would be really, really funny. So who knows, maybe I’ll do a Mitt Romney chair. It’s whatever makes me laugh, and when I talk to people, whatever they find the most humorous, that’s what I lean towards. Chelsea Handler featured my chairs on her show, and it was very funny, so I have to make a chair for Chelsea Handler.
Do you have any interest in developing other pieces of furniture?
Oh absolutely. That’s in progress. We’re going to be doing couches, different styles of chair. What you’re seeing right now is the Sit on My Face collection, the first one, so it’s mid-century modern style. Very, very minimalist, because the chair acts as a frame for the photograph. And the next series of chairs is going to be more ornate, so you go from the black frame to the gilded frame. That’s how I look at everything, the chair is the frame for the photograph. And different celebrities warrant a different type of chair.
Can you give an example?
So Joan Rivers would not be a mid-century modern chair, because that’s not her personality. She would be a Queen Ann golden, gilded chair. You think of Will and Kate, they would be the same thing. Since they’re royalty, it would have to be a royal-esque kind of chair.